Most custom design and naming projects start at $299. You pick your own package and all packages include the award to the winner, crowdspring’s fee, a custom legal contract giving you full rights to the work you’re buying, free focus groups, our award-winning customer support, tools and platform.

You can select packages and features based on what you need and your budget. You will always know up front exactly what you’ll pay, with no hidden costs and no surprises.

Absolutely! Every project on crowdspring is protected by a custom legal contract giving you full rights to the work you’re buying. If you have multiple awards, you’ll have separate contracts for each. You can use the winning design (or name) any way you like. You can change it or alter it in any way – it’s yours.

The non-winning work remains the property of the person who created that work. This means you may not use those other entries (or any portions of them) in any way. But we give you an easy way to add awards and make offers in your projects when you find more than one design (or name) you love. 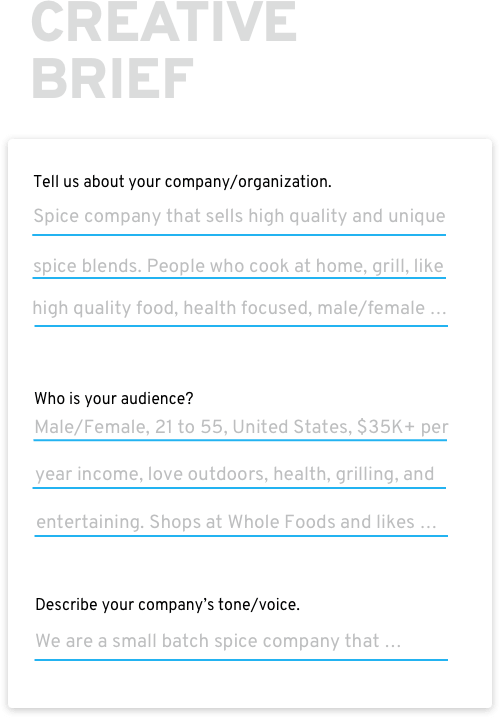 In a typical Marketing Copy project on crowdspring, many professional designers submit dozens of custom designs based on your brief. See all designs submitted to this project.

Crowdspring has one of the most trusted and respected creative community in the world. It’s one reason why many of the world’s best Brands and agencies, plus tens of thousands of entrepreneurs and small businesses from 100+ countries trust crowdspring for custom design and business names.

To ensure that clients receive professional quality designs and names, we have to be sure that work on crowdspring conforms to our quality standards. Crowdspring verifies identity and curates work quality for every creative who wants to work on crowdspring - in every project sub-category. We do this to guarantee the trustworthiness and talent of our community.

In addition to our initial reviews when we first approve a creative to work on crowdspring, our team regularly reviews work submitted to projects and creative portfolios to ensure that the work continues to meet our quality standards. And, we have an innovative and industry leading reputation system for every designer and namer that measures the quality of their work using a proprietary algorithm.

Absolutely! In fact, this is a key factor for success. Once the designs start rolling in, let the designers know what you think about their designs. We give you powerful feedback tools and you can score and give individual feedback. You can also update your brief if you want to address all participants in your project. They are happy to make changes and iterate on their designs.

When you score each entry (1 to 5 stars), your score and comments are private. Only you and the individual designer will see the star rating and comments on their design. Updates to your brief are public for all participants in the project.

Yes! Our crowdsourced design projects are protected by our 100% money-back guarantee. If you’re not satisfied with the results of your Silver, Gold, or Platinum package design project, simply reach out to our support team and let us know within 30 days of the end of your project. We’ll return all of your money - the project award, our fees - the whole shebang.

Naming and tagline projects on crowdspring are protected by our 100 Name/Tagline Guarantee. There’s no risk - you can request a full refund if you receive fewer than 100 entries and don’t have one you love. Just contact our support team within 30 days of the end of your project. If you haven’t received 100 names and ask us to honor the guarantee, we’ll return all of your money - our fees, the project award, every penny!

You can also opt out - and here’s why many clients do so. Clients opt to waive their right to a refund by Assuring their project. By choosing to assure a client promises that they are committed to their project and will award a creative no matter what. Assuring is absolutely free. It motivates more creatives to participate and results in more and often, better quality designs and names. And, it’s always the client9s choice. You can Assure your project when you post it, or at any time after you post it. 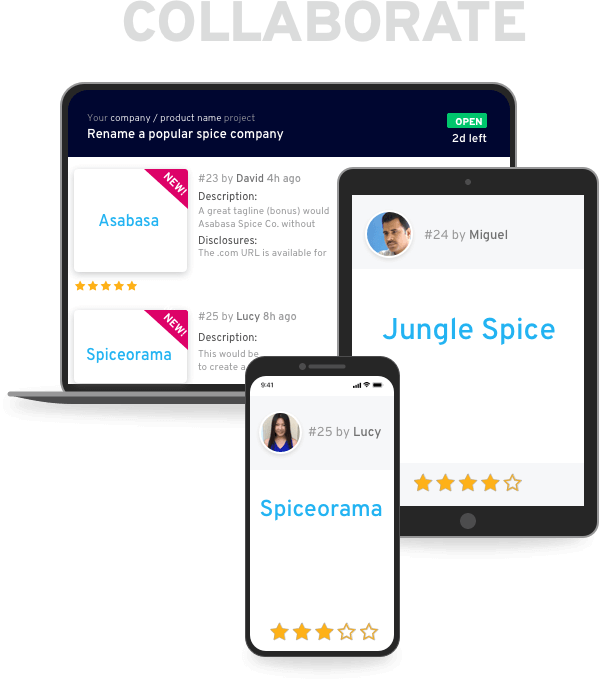 Have questions about custom Marketing Copy?

3.The client picked the winning design and received final files.

You have seven days to select your favorite after the project closes. Sometimes, you might need an extra few days. Just let us know when that happens.

Before making the final decision, you may want to run a free focus group. All design packages include unlimited focus groups.

A focus group (also called a "poll") allows you to invite friends, customers, colleagues and anyone else to vote and comment on their favorite designs (you can assign weighted votes or let each vote count equally). Anyone is eligible to vote as long as they have the special voting URL we’ll provide to you (they will not need to register an account). Your focus group can be public or private - you choose! You fully control whom you invite to each focus group and what designs are included in each focus group.

When you pick the winner, you’ll have a private area to complete the project with the designer you chose. If you have more than one award, you’ll have a separate wrap-up with each designer. Each of you will sign the legal contract for the project (giving you full rights to the winning design.

For each project category, we’ll recommend required file types and will ask the winning designer to provide you with appropriate final files that can be edited. You can always request specific formats you require. 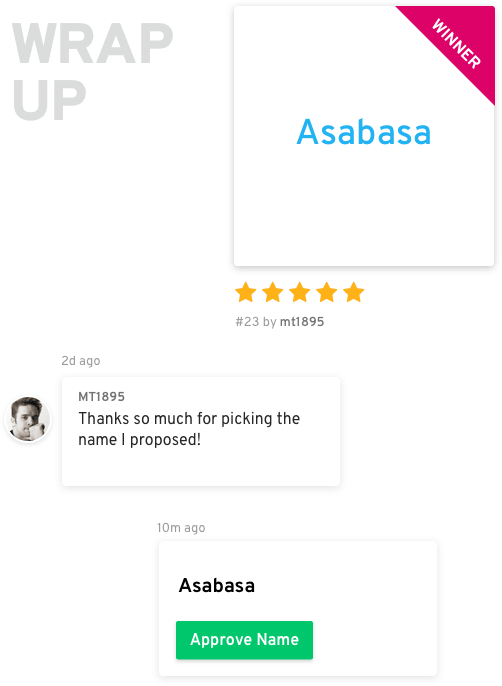 LET ME TELL YOU ABOUT US:

Sensual Couples is a new division of Adam & Eve, the largest adult product company in the US. Our new division focuses specifically on the couples market and our tag line is "Keeping Passion in Monogamy" Our products are intended for hetero-sexual couples in long term relationships who might like a little help keeping the heat in their love lives.

HERE IS WHAT WE NEED:

We want an approximately 15 minute sensual fantasy script that will be recorded onto CD. We sell the CD and sensual products to go with it. Couples act out what is described without having to say or do anything other than what is directed.

We want 4 different sensual fantasy scripts, but are starting with one to see how this works.

Feel free to contact us if you don't want to work on the same idea as other writers.

OUR TARGET AUDIENCE IS:

Many couples think play acting a fantasy could be fun but it can be difficult or even embarassing to come up with and role play a fantasy on their own. Different narrated fantasies allow couples to choose something that sounds fun while reducing the "self exposure". Couple follows what is being said, making it easier to try new things.

Here is a rough idea of what we are looking for. You need to complete the script so we can send it to a voice artist to record.

Except for the last few sentences, every word you write will be spoken by the old man.

Recorded voice is the Old Man

Written directions will tell the couple how to get started before starting the CD.

Old man tells eunuch to leads girl to the bed, lay her on her back and

secures her hands and feet to under bed restraints,

While this is being done, old man recounts the below background:

Old man is blind with arthritic hands that no longer work

Long ago, he was a great warrior, then sultans fathers trusted bodyguard

Old man tells girl all the sensual things that are going to happen tonight. How much pleasure she will have witht he sultan and not to be afraid.

Old man tells eunuch to use his hands and fingers to stroke feet, calves, thighs, then arms, hands, shoulders

gently lick and kiss it off

Says brush honey on her breasts

and slowly lick it off

Says wash off and dry with soft towel

Says she must be thirsty, brush ice on her lips

Says move ice slowly down her chin, cooling then warming by licking, kissing, warming with breath

Says move between her breasts to her navel, kiss navel

When starts to get closer to pubic mound, change focus to lower

Says slowly move ice down to inside of thighs, cooling, kissing, licking, warming

The old mans voice slowly fades away and we hear a soft snore.

We hear a younger man whisper Shaheen, Shaheen. It is Amir, your true love. He says The old man has fallen asleep. This morning when the sultans guards took you from the bazaar, I wanted to attack them. I would gladly have given my life, but I knew it would not set you free. This evening I brought the eunuch drugged wine with his meal and took his place. I bribed one of the guards to bring one of the sultans wives to his chambers instead of you.

WE ABSOLUTELY MUST HAVE THIS IN OUR PIECE:

Sensual, soft and sexy with no crudeness. No "talking dirty" The ideas must be expressed with prose.

Must include products we offer.