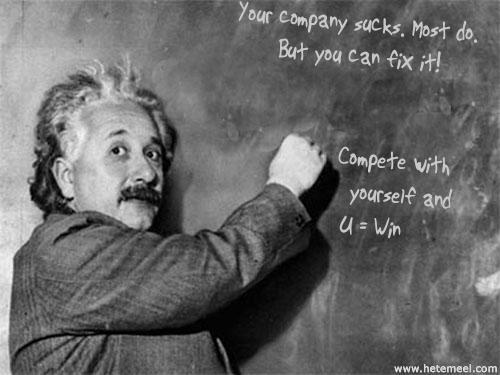 Don’t take it personally, but your startup or small business sucks. Most do.

Even the best companies become complacent, over time. At its peak, Kodak controlled 90% of the US film market and was one of the most valuable brands in the world. Sony, not long ago, dominated the market for televisions, cameras, video recorders and many other consumer electronics. Yahoo was once the shining star of the Internet.

Take a close look at your company’s products or services. Are they the best? What makes them great?

You say that you never worry about your competitors and compete only with yourself?

Everyone thinks about their competition. Everyone. Including Steve Jobs and Apple. How could Apple claim that its products are magical, revolutionary and innovative unless it knew exactly what the competition was doing? If you’re unaware of your competition – or pretending that you don’t care about them – you’re lying to yourself and to others.

Ever since crowdSPRING launched in mid 2008, we’ve been the market leader for crowdsourced graphic design, industrial design and writing services. We’re fortunate to have one of the largest communities of designers, industrial designers and writers on Earth – more than 118,000 from nearly 200 countries. We work with more sophisticated brands and agencies in a month than our competitors, combined, work with in a year. 96 percent of our customers recommend us to others.

But such success can be myopic because instead of making our service great, for a long time we focused on making it better than the services offered by our competitors. Being better can help you gain market share, but it won’t help you stay there.

There’s a difference between a better product or service and a great one. The moment you understand this difference is the moment you’ll begin to understand how you can fix your startup or small business. Apple understands this difference. That’s why it’s displaced market leaders in many different industries – and created new markets where none existed.

And don’t ever try to claim that your product or service is great because you’re innovating. You’re not. The term “innovation” has almost completely lost any meaning.  It means different things to different people and is grossly misunderstood and abused. Making a change to a button’s color is not innovation. A startup that has zero revenue and no customers isn’t innovating or disrupting anything.

Take what our friends at 37signals did recently when they launched their new version of Basecamp. Basecamp, in eight years, has become one of the most popular project management and collaboration tools. 37signals continued to incrementally improve the product but realized that they grew a bit complacent.

It’s completely new. Reimagined, rethought, and redesigned from the ground up. Everything was reconsidered. Every idea, every flow, every concept. Nothing was sacred – every idea and every feature had to fight for its place in this first version.

I was fortunate last year to talk with Jason when 37signals first began their project to re-imagine Basecamp. Jason and I talked about the need to reconsider everything and not just look for ways to improve things incrementally. That conversation, like many I’ve had with Jason, made a strong impression on me and I looked at my own business with a fresh set of eyes.

Are you ready to learn the secret of how you can fix your own startup or small business?

It’s pretty simple – but incredibly powerful. Compete with yourself.

For some time now, we’ve been regularly asking one simple question at crowdSPRING – if we were to start a competitive business and compete with crowdSPRING, what would we do? Notice that I didn’t ask what we would do differently from what we’re doing now. The two questions might seem similar – but they are not. Differences are often incremental and marginal. Changing the color of a button or some text on a page can reflect a difference, but not a meaningful one.

Asking what would we do differently leads to changes in button color, slight tweaks to the UI, changes in some copy, etc. Asking what we would do leads us to question the foundation of everything we do.

My partner and I have been meeting weekly (we spend about 25% of our time on this) and looking at everything we do with a fresh eye – reimagining, rethinking and redesigning – from the ground up. We’re doing this offsite one day every week so that we can focus on this project and afterwards, we’re involving our entire team to challenge us and to help us refine and implement our ideas. You’ll be seeing some of that work very soon –  we’re proud of what we’ve been able to do since we stopped worrying about marginal improvements and making our service better, and started focusing on making crowdSPRING great.

Do this in your own business. Do it now! Rather than make incremental improvements that make your product or service better – set aside  time and ask yourself what you would do if you were to start a business competing with your existing business. Don’t ask how you would change some of the things you’re doing – focus on what you would build from the ground up. Would the product or service look the same? Would you want to poach the people working for you now? (if you would not – let them go. Now!) Would you even start the same business?

Focus on building a fresh business as opposed to making incremental, marginal changes. Incremental and marginal changes rarely lead to greatness – just ask Microsoft, Nokia, Xerox, Kodak and many other companies that learned this painful lesson.

Your startup or small business sucks. Most do. But you can fix it and make it great.