What Can You Learn From The World's Best Brands? - crowdspring Blog
2%

You might recall my post earlier this year about PSFK’s Good Brands Report 2009. In that post – Branding Secrets Of The World’s Best Brands – I talked about five common lessons that startups and small businesses can learn from the world’s best brands. Those lessons included: having a good company name and logo design, consistency, developing an ecosystem, building community, and delivering value.

Being a genuinely good brand in 2010 takes more than a widely used product and an ubiquitous global presence. Though there is no precise formula, what the ten good brands on our list have in common is a penchant for imagination, innovation, environmental responsibility and social consciousness.

Their products and services don’t just serve a basic need, but instead help as a tool to improve people’s lives. Several companies have stayed strong, maintaining their positions from last year with continued innovation, while others on the list have jumped into prominence through offering creative solutions and ground breaking new business models.

Interestingly, the third leading brand is Jamie Oliver – an individual.

Jamie Oliver has quickly become the face of a revolution in healthy eating. His vision of a better diet earned Oliver a TED Prize for intiating new awareness around the way children eat, especially in public schools. His campaign to improve meals in schools raised over $1 billion to the UK system, as he spends time educating American children in the Jamie Oliver’s Food Revolution USA TV show.

I am surpsised to see Foursquare in the top 10 in the 2010 report. According to PSFK:

Foursquare has become one of the fastest growing mobile brands, as it strives to create a more integrated social ecosystem within cities. By elusively combining location-based tracking with user reviews, the practical application takes on a gamer’s mentality to “check-in” for greater exposure to new and familiar locales. 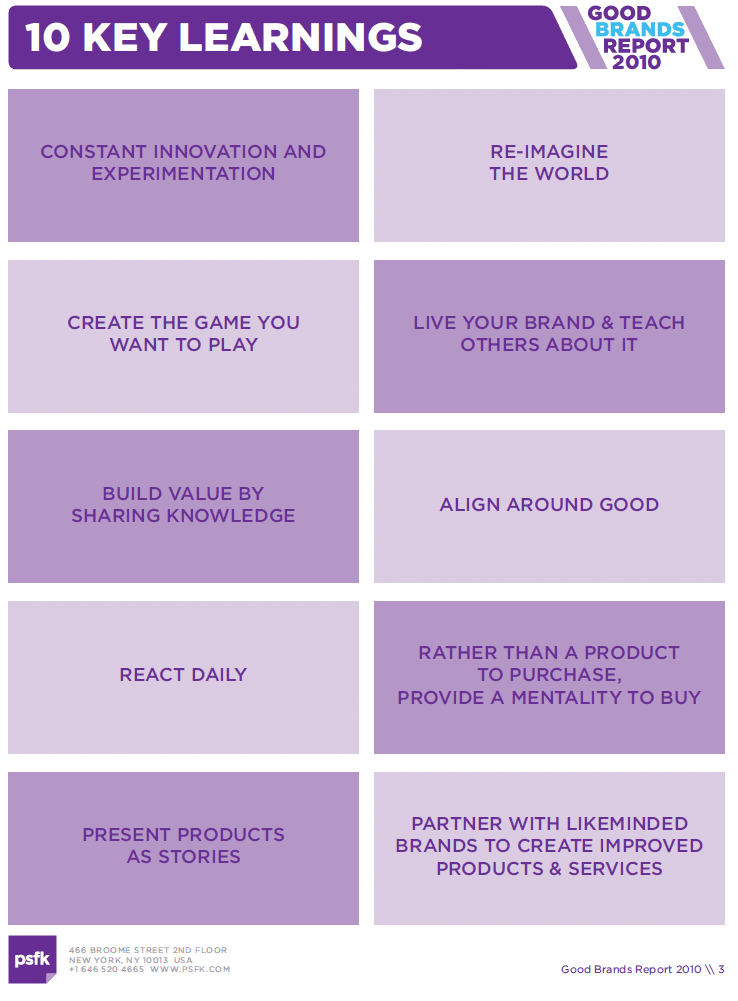 While I respect the media attention directed at Foursquare – and firmly believe that there are huge opportunities in location based marketing – I wonder whether Foursquare’s focus in misguided. If you’re talking about location based tracking and user reviews – Yelp is clearly the current leader in that space. If you’re interested, I recently discussed Foursquare on my personal blog – What is Your Core Business?

The 10 key learnings identified by PSFK in the report (to the left) are valuable to any business thinking about ways that business could strengthen and improve their brand.

The learnings represent not only the commonalities seen in all of the world’s best brands, but also the elements necessary to build a sustainable, valuable, and relevant business.

I encourage you to download a PDF of the Good Brands 2010 Report – it’s a quick read with lots of valuable information.