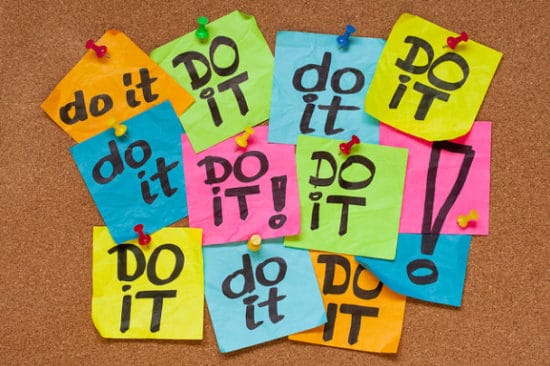 To-do lists are often recommended as good strategies to increase productivity and efficiency. Walk through a typical office and you’ll probably notice lists, post-its, and other reminders littering desks, laptops, and smartphones – manifesting in a giant reminder of things that haven’t been done. While the idea is for these lists to serve as a reminder, they actually end up having a negative effect on our psyche… and in turn, our overall output.

In 1927, Russian psychologist Bluma Zeigarnik found that waiters remember orders only as they were serving them. In his culminating study on this psychological effect, he realized that this worked universally throughout memory recall:

A quasi-need persists if the task has not been completed to the subject’s own satisfaction regardless of whether this is equivalent to what may seem from another’s inspection to constitute “finished” or “unfinished”. Tasks with whose solution the subject is not content will function in his memory as “unfinished” even though the experimenter may have classified them as completed tasks, and vice versa.

Basically, Zeigarnik found that our brains will literally nag us if we know that there are more things for us to do. And just like normal nagging, this self-nagging can prove to be unhealthy, causing us to put unnecessary criticism and pressure on ourselves.

That sort of stress can seriously impact a person’s productivity, and in turn, your bottom line. As Fast Company reported last year:

A recent study by economists at the University of Warwick found that happiness led to a 12% spike in productivity, while unhappy workers proved 10% less productive. As the research team put it, “We find that human happiness has large and positive causal effects on productivity. Positive emotions appear to invigorate human beings.”

Shawn Anchor, author of The Happiness Advantage, has found that the brain works much better when a person is feeling positive. At those times, individuals tend to be more creative and better at solving problems. And additional research has shown that when workers are happy they’re more effective collaborators working toward common goals. As Anchor sees it, the incentive for organizations is clear-cut—”happiness leads to greater levels of profits” for companies that take the right steps.

And depending on the duration of such stressful periods, the impact can be much more pronounced. We often talk about stress as though it’s something that a few days off work can relieve, and that makes sense. Who doesn’t feel better after taking some downtime? The problem is that if the stress continues — stress derived from a regular activity like using to-do lists, for instance — there can be long-term consequences that feed back into the productivity argument. Dr. Travis Bradberry, co-author of Emotional Intelligence 2.0, explains:

Weeks of stress cause reversible damage to neuronal dendrites (the small “arms” that neurons use to communicate with each other), and months of stress can permanently destroy neurons.

And what do we get in exchange for using this stress-inducing organizational tool? Not much. Despite our reliance on the tactic, research suggests 85% of a person’s output includes tasks not included on their to-do list, and that 41% of to-do list tasks never get tackled at all.

To be fair, those numbers actually make a lot of sense (and may feel familiar, if we’re keeping things 100). To-do lists lack the context necessary to be effective planning and work management tools. You end up with a number of tasks that need to be completed without real regard for the level of urgency associated with those tasks, the amount of time required to complete the tasks, or anything that will how you accountable for completing the tasks.

So why on earth are we doing this to ourselves? Down with the to-do list! There’s got to be a better way.

And there is! Multiple better ways, actually. One great alternative to a nagging to do-list is to simply schedule your tasks into your day, week, month, or year. It’s one thing to say you have to catch up on emails, set up a meeting, draft a marketing plan, or give feedback to a designer on a logo project – all to be done at some ambiguous point in time. It’s another to actually put it into your schedule that you are going to answer emails from 9-10 am on Monday, draft a marketing plan from 3-5 on Tuesday, or give 5 designers feedback starting at 11 am on Wednesday. This alternative is almost always foolproof, because there are no excuses or conflicts when you actually prioritize time for it. And if you can’t justify scheduling a task? It probably wasn’t worth your time anyway!

Another great alternative is an anti to-do list, also known as “done” list. Such lists consist of tasks you have accomplished, so that you give yourself a sense of success and increase your levels of self-motivation. This way, you feel energized the next day to keep pushing through tasks because after you’re done, you get to add them to your done list.

And if those two alternatives don’t work for you, restructuring your to-do list can also help. Making it more of an outline, like a 1-3-5 list, can help alleviate the stress of having 43 unfinished tasks. Set 1 big task, 3 small tasks, and 5 tiny tasks that you can get done the night before you anticipate doing them. Remember to keep your busy schedule in mind!

Hopefully, with these tips, you can ditch to-do lists in favor of something that really works for you.

What other techniques have you used to better organize and prioritize your work?