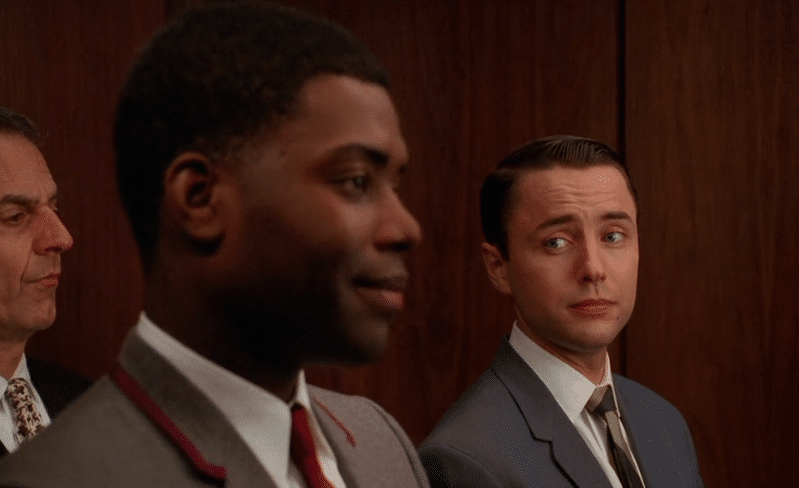 In Season 3 Episode 5 of Mad Men, Pete Campbell finds himself in a tough situation. He needs to pitch a new strategy to client Admiral Televisions. Their sales are flat, and they need to turn things around quickly. After a little bit of research, he finds that the television sets are very popular among lack consumers, and tries to sell a more diverse advertising approach to the client. In the end, they reject the strategy, because as Campbell’s boss puts it, they have “no interest in becoming a “colored” television company.”

The plot was fictional, but it was an echo of things that were actually happening during that time period. After World War II, Pepsi was looking for a way to compete with Coca-Cola and failing miserably. The CEO at the time decided to buck tradition and heavily target black Americans. Major initiatives were rolled out, black sales reps were hired, and some of the country’s first black models got their big break. It was a massive success… until it wasn’t. As Tanner Colby wrote for Slate in 2012:

Black consumers, intensely loyal to institutions that showed them respect, turned out in droves. The campaign was a great success. It was so successful that it had to be killed, and quick. While Coca-Cola remained wholesome and All-American, Pepsi was becoming known as “nigger Coke.” Fearing a total collapse among white soda drinkers, at a conference for regional Pepsi bottling executives in 1949, the otherwise progressive Walter Mack took to the podium and said he would not let Pepsi become, in so many words, “a nigger drink.” His top black sales rep, who was in attendance, got up and walked out. Shortly thereafter, the company’s black marketing efforts were quietly scuttled. In 1953, singer/actress Polly Bergen was rolled out as “the Pepsi-Cola Girl,” a fresh-faced, lily-white makeover for the brand.

Times have changed, of course. Perhaps not as much as we’d hoped, but at a minimum, marketers have become less cowardly about embracing diversity. And thank goodness.

This has partially been driven by necessity. Maybe Pepsi and Admiral Televisions were willing to sacrifice market share to uphold bigotry, but a company that does as much today risks being swallowed whole by the competition. It’s simply bad business to not market to diverse communities. And because diverse communities, as seen in the Pepsi example, respond well to representation and respect, we’re not talking about slivers of market share here.

Compounding the importance of diversity in marketing strategies is the rise of conscientious consumerism. It’s not just about whether or not a marginalized group sees themselves in the marketing. It’s also about what allies of those groups see. Campbell’s Soup, for instance, has been lauded by members of the queer community and those who stand with them for their positive representations of same sex parents. Celebrating diversity not only gained them some loyalty in the queer community, but from folks well outside that realm too.

And putting aside profit margins, it’s just the right thing to do. We live in an incredibly diverse world, and ignoring this in favor of a homogeneous representation is plain insulting. It’s also heartbreaking. Diversity enriches every aspect of our lives by bringing together unique and valuable perspectives and traditions. That deserves to be celebrated, not glossed over. We’re better when we acknowledge and revel in our differences.

To be fair, it’s not just in marketing that we miss these moments of celebration. We live during a time where there are a lot of tensions surrounding diversity in our politics, institutions, and lived experiences. There’s no denying that. But marketers can and should try to help shift that. By committing themselves to hiring diverse creatives, targeting diverse communities, and representing the communities they aim to serve in their work, they might just be able to help influence some of the turmoil.

To quote Mad Men‘s indomitable Peggy Olsen, “If you don’t like what they’re saying, change the conversation.”