One of the most enduringly popular ad campaigns in memory is from the California Milk Processor Board – “Got Milk” has become an iconic part of the cultural landscape and has been shared, copied, parodied, and imitated over and over again. Although that campaign pre-dated the rise of the social media, it is a great and early example of the viral effect that can sometimes occur with a fresh new campaign.

A few of week’s ago, the Milk Board and their agency, San Francisco-based Goodby, Silverstein & Partners, launched a new social media campaign, a tongue-in-cheek look at how drinking “milk can help reduce the symptoms” of premenstrual syndrome. The campaign, however was targeted at men, and a micro-site, with the URL “everythingidoiswrong.org,” was set up and labeled for men as “your home for PMS management.” The site was launched around two weeks ago and originally scheduled to be live through the end of August. The site’s content included lists of “apologies” that men could use with women with PMS symptoms. 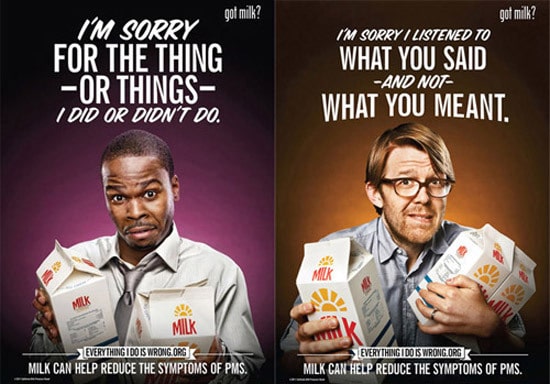 Well, guess what? It happens that a campaign meant to be funny and provocative can actually turn out to be tasteless and sexist. Contrary to popular myth, obnoxious content on the web does not always go over so well. After just a few days, the Milk Board found themselves in the middle of a firestorm of criticism on Twitter, Facebook, and the blogosphere as women rose up . Even FunnyorDie came up with a vicious parody ripping the campaign.

The lesson? Never assume that you know what will happen once your campaign is released into the wild and never assume that what you think is funny will be seen that way by the other 99.999999999% of the online world. In the end Goodby and the Milk Board took the site down after 12 days and are now redirecting the original URL to a site titled “Got Discussion” where they are working earnestly to undo the damage done.