Once a year, San Diego becomes the nerdiest, most magical place in the world as thousands of super fans convene for the International Comic-Con. This year continued the tradition of fantastical celebration, with major announcements from DC and Marvel, the history making premiere of Star Trek Beyond, a brand new Blair Witch, and a Skype-endorsement from Edward Snowden. 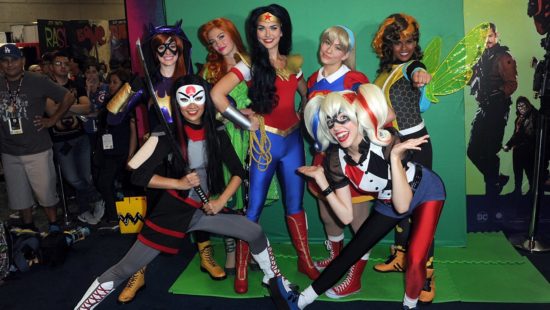 The convention is usually associated with spectacular cosplay and enthusiastic community, but you don’t need to have a dog in the Marvel v. DC fight to appreciate this week of revelry.

(Though, to be fair, most of the crowdSPRING crew is #TeamMarvel4Life.)

No, even the straight-and-narrow-suit-and-tie set can learn a lot from the branding tactics executed at Comic-Con and beyond by content creators.

You see, Comic-Con is Swag City. You can’t take more than two steps without running into promotional products for your favorite characters. That’s not so unique. After all, you can go to a conference for dental hygienists and find an an avalanche of promotional product as well. And, as we’ve written in the past, there’s good reason for that. Promotional products can be a fantastic contribution to your marketing strategy.

What is different about Comic Con and the brands you’ll find there is that they aren’t usually giving away their promotional products for free. They’re charging for them, and raking in the big bucks.

Attendees collectively spend more than $80 million a year at the convention, and while some of that is associated with attendance costs, food, and the like, a big chunk of that goes to merchandise associated with featured brands.

Wait a minute, you might be saying. You’re talking about merchandise?

It would be easy to roll your eyes at this point, say that your business isn’t the same as a comic book and you’re not selling action figures. You’d (probably) be correct, but you’d also be missing the forest for the trees. Think about it. These brands have found a way to not only sell themselves and their story, but get other people to sell them and their story and pay for the privilege of doing so. Maybe you don’t wear a cape and tights, but that sort of dynamic is something that any business wants.

We’re not saying you’re going to be raking in the dough by peddling t-shirts with your company’s name on it, but that doesn’t mean you can learn a bit from the tactics used by brands that do. The ability of Comic-Con and other entertainment brands to profit off of merchandise is, at its core, tied to a business model that centers on two things:

1) Building a brand that is high quality

2) Encouraging an enthusiastic community around that brand

That first element is sort of a no-brainer, right? There’s no company that sets out to build a poor quality brand.

It’s the second element where brands outside the land of super powers and saving the world tend to struggle. That’s understandable. But you don’t need your customers to dress up like your logo to have an engaged fan base. What you need are brand evangelists, and the way you get there is by doing what the Comic-Con folk do: make it fun to be a fan.

How can you do that?

Get the Party Started

Fandom is essentially expression of intense emotion. As a rule, folks tend to be uncomfortable making such expressions (that’s not an excuse for your ex). They need a little encouragement. If you want to get things going for your brand, you’ve got to be the one to do the encouraging.

So get a little goofy. Write a song about how awesome your company is and make a music video featuring your team. Make a bunch of “super fan” t-shirts for your team and post pictures of it on Instagram. Throw your brand birthday parties. Get as excited about your brand as you want your fans to be, and they’ll follow suit.

One of the cool things about being an unapologetic fan of an entertainment brand is that your fandom sometimes gets recognized. You do something like dress up your dog like Captain America and Chris Evans retweets you. That sort of thing.

You can use that same tactics as you bolster your brand’s fan base. Send a shoutout to your latest follower on Twitter with a Vine of the team blowing them a kiss. Share a picture of a fan using your product with comments that cast your brand as their fan.

You’re excited. They’re excited. You want to help them show the world just how excited they are. Promotional products sound like a good bet here. But the blasé, unicolor stress ball with the obligatory logo? That’s probably not going to do much for you in this department.

Merchandise sells because it’s worth buying. Yes, there is brand-associated loyalty factoring into such purchases, but the most successful merchandising campaigns put out items that people want to buy.

Listen, maybe one day your brand will actually be electric enough to sell merchandise. Maybe not. But getting to that point should be a goal, regardless of whether you’re interested in merchandising. A brand like that is going to bring in the big bucks one way or another.