I was reminded today from Tal (a developer at crowdSPRING) that a new version of Ubuntu is out today. Code-named “the unoriginal banana” version or something, I don’t know. Ubuntu has great, but ridiculous, naming conventions.

Now, Ubuntu isn’t exactly known to be friendly with designers. There are certainly people who use The Gimp and think it’s a perfectly suitable replacement for Photoshop, but you (probably?) don’t see these people working in a studio, needing to crank out high-quality deliverables yesterday.

Ubuntu took a pretty big step in the “looks” department with this latest release. Up until now, fonts rendered in any flavor of Linux always looked… ugly. Really, really ugly. Slap-your-grandma ugly. With this newest version, they’ve released a new font smoother that puts Ubuntu’s font renderings up in the same league as Windows and OS X.

In fact, the following image has the same text rendered in Windows XP, Ubuntu 9.10 and Mac OS X. Can you tell which is which? First person to guess correctly* gets … a crowdSPRING slinky and …  half a book of stamps.** 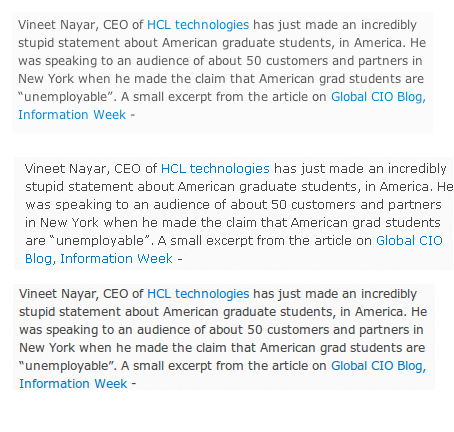 * According to the INSANE AMOUNT of comments (zero) my latest blog posts, this competition should be non-existant. At least leave me a comment with a joke or something. Hockey related gets you bonus points.
** Gimmie a break. I’m trying to move to Chicago and everything’s slowly getting packed. Enjoy your book of stamps. Send your grandma a letter.