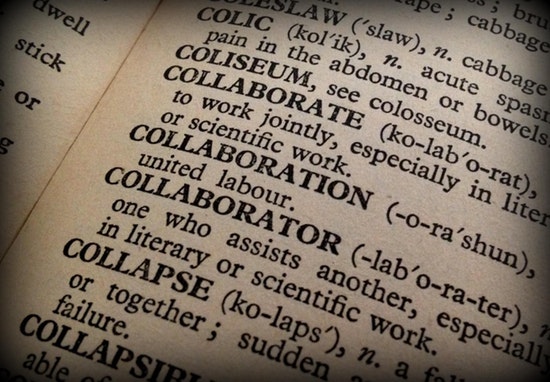 “Any word you have to hunt for in a thesaurus is the wrong word.”

The paper dictionary has become less and less frequently used as we become increasingly reliant upon the web to define unfamiliar words or look up a synonym for that article you’re writing (I have never done this, but I hear some people do).

The benefits of using a paper dictionary, however, are not to be dismissed. Austin Kleon espouses his sentimental-meets-pragmatic reasons for holding onto a life long love affair with the dictionary. As he points out, when you look up one word, you’re encountering all kinds of word-relatives in the process. This deepens our understanding of language and leads to better writing as we gain a more complex mastery of the written word.

The next time you’re tempted to rush through a quick word lookup, think about pulling your trusty dictionary off the shelf. You might be surprised to find a trove of word treasures waiting for you in its pages.

30 Apps That Turn Your Phone Into A High-Powered Mobile Office For Your Business | @crowdSPRING Blog – https://t.co/AaRNuOCKQJ

A Different Way — Thoughtful Financing, Or Why We Said “No” to a Lot of Money | Parse.ly https://t.co/ZvlhpZk073

The Truth About the Post-Truth World (And Why Businesses Should Care) https://t.co/LwJbhdNeUt

What Trends in Email Marketing Mean For Your Strategy https://t.co/jeOdUj7UgM

A look at ways marketers can use Artificial Intelligence. https://t.co/4ya9xWScqp But there's SO much more than can be done…

Lengthy but good read … A comprehensive guide to the new science of treating lower back pain https://t.co/NoKy5wrz8u pic.twitter.com/hSzStqso6E

Wow – well worth a few minutes to watch. https://t.co/RbCOuZjb1z

I always learn something useful from @randfish Whiteboard Friday (this one about a possible organic quality score) https://t.co/XosnAcbHbL pic.twitter.com/wGoIx62LpY

This is an interesting way to look at population distribution. https://t.co/DOuBJ33WGj