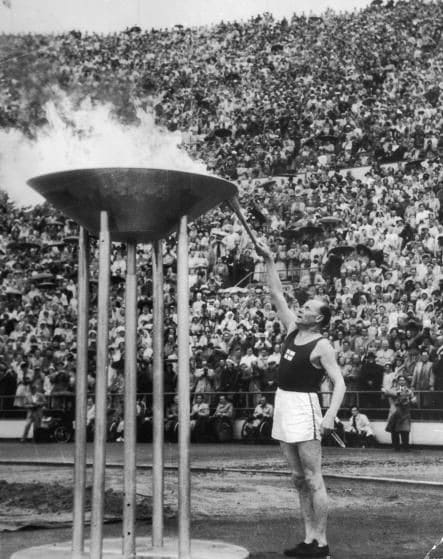 When Gabby Douglas climbed on the balance beam last week en route to her gold medal for individual all-around women’s gymnastics she was the picture of calm focus. She was smiling, but she was also tense, and as she began her routine it was clear that she had completely tuned out everything around her. You read accounts sometimes from people who have experienced traumatic or dangerous moments and how all sounds faded away and their vision became tunnel-like. I watched her incredible performance on television that night, and I could tell that it was like that for Ms. Douglas when she took those first steps to mount the beam – the crowd’s roar faded away, the camera flashes disappeared from her view, and her entire physical and mental concentration was focused on that 10 cm. wide strip of wood beneath her feet.

I am no athlete nor am I a huge sports fan; what I know about most sports would, perhaps, be enough to fill a short brochure, but I do love and admire athletes and truly believe that as entrepreneurs we have much to learn from them. Watching the Olympics has been inspirational on many levels, but when thought about in the context of business and startups, I believe that we can discover much about ourselves, our companies, and out own teams that can benefit us in the competitive atmosphere of business.

1. Focus. Gabby Douglas didn’t get to the pinnacle of her sport and her craft just by being supremely talented. She worked. Hard. Her training would have included hours of practice on the various equipment, but also calisthenics, running, stretching, yoga, pilates, and weight training. Beyond the physical training, it is the mental and emotional skills that truly make the difference between great athlete and gold medal-winner. Entrepreneurs can take a simple lesson from this: your business is like an athlete – it needs to be kept competitively healthy and fit, but also requires that you focus deeply on your own business fundamentals, and strategy, and that you always keep in mind that this is a competition; your own level of focus may be the difference needed to best the competition.

2. Teamwork. When Michael Phelps won his record-setting 19th Olympic medal in the 4 × 200 meter freestyle relay the first thing he did was to hug and thank his teammates for their support and inspiration. Business, like sports, often requires a group of people to work together towards collective goals and with common intent. I have wondered if the concept of Agile Development was, in part, inspired by sports teams and their emphasis on collaboration, cross-functional teamwork, and constant review and practice.

3. Individual effort. In spite of what I just wrote about teamwork, it is often the individual effort that makes the difference in sport. Each athlete must be responsible to, and supportive of, the team but it is their own individual work ethic, focus, and effort that makes the difference when besting the competition can be measured in hundredths of a second, of fractions of a point. Your company is also made up of individuals – each with their own essential focus, abilities, and quirks; how effectively your team is managed, incentivized, and encouraged is up to you.

4. Emotional investment. For every athlete who wins a medal at the games, there are dozens more who come up empty-handed and to watch their faces after an event can be heart-breaking and just as moving as it is to watch the winners. These are people so dedicated to their craft, their sport, and their bodies that they were  willing to work endless hours, sacrifice countless pleasures, and endure untold physical pain. They do all of this and then they compete with their entire hearts, minds, and bodies on the line – no fear, just complete dedication. If entrepreneurs were to take away anything from watching the games it is the lesson of committing completely and totally to the business at hand; care deeply and don’t be afraid!

5. Winning. When it comes right down to it, athletics, just like business, is about success and winning is the ultimate expression of success in business and in sports. We measure our businesses against the competition but also we measure by our own internal accounting of sales, profitability, efficiency and countless other metrics. Athletes also measure themselves by tracking performance metrics, personal best measurements, and progress, but at the end of the day they measure themselves by whether or not they won their event, their game, or their medal. Like the great athletes, entrepreneurs must always maintain a competitive attitude and a fierce determination to win!