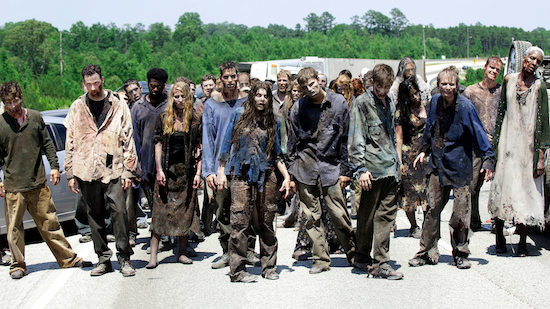 I’m a fan of The Walking Dead, a U.S. cable television series about surviving a zombie-infested world.

What can entrepreneurs learn from a television show that features mindless, reanimated corpses with an insatiable hunger for human flesh? Surprisingly, there is much to learn.

Here are ten fundamental lessons entrepreneurs can learn from the zombie apocalypse:

1. Indecision and inaction is paralyzing and leads to failure. Throughout the first two seasons of the series, the group’s leader, Rick Grimes, is, at times, indecisive. His decision paralysis eventually costs many lives and threatens his group’s survival.

Indecision can be fatal to startups. In fact, indecision and inaction can harm a company far more than making the wrong decision. This is true for leaders and is also true for every member of your team. At crowdSPRING, we don’t hire people for any position unless we believe they are comfortable and capable to make decisions on their own. Encourage people to start with small steps and small decisions, and build from there. The first step, no matter how small, is crucial to success.

Indecisiveness can impact even the largest companies. Microsoft sat on the fence and missed the shift to mobile computing. It now is paying dearly for that indecisiveness through it’s inability to gain a strong foothold in the mobile space. Polaroid and Eastman Kodak debated the merits of digital camera technology and while they debated, the technology buried them. The most relevant current example is Blackberry, which did nothing while its core market was swallowed by Apple and Google. Today, Blackberry is no less a zombie than the reanimated corpses in the TV show.

2. Celebrate small wins. In one of the episodes of the Walking Dead, a small group of people finds an abandoned prison after numerous deadly encounters with zombies. The group’s leader wants everyone to conserve their energy to focus on finding food and ammunition the next day, but his wife compellingly argues that the group should enjoy their small victory because it would motivate them for the challenges yet to come.

That was good advice. It’s very important to stay focused, but many entrepreneurs forget that it’s also extremely important for startup teams to celebrate incremental success. Incremental success builds on itself and encourages people to work hard to achieve the next milestone.

3. Focus. If you’ve watched any movie of show about zombies, you know that zombies are commonly shown mindlessly wandering until they find human flesh, and at that point, reaching and eating that flesh becomes their sole and absolute focus.

Many entrepreneurs suffer from a similar problem. Many entrepreneurs sleepwalk through their ideas without passion or focus, waiting for months and sometimes years to get started. Focus will be the difference between success and failure. Find an idea that drives your passion, and get started! Incidentally, if you have trouble maintaining your focus, consider using checklists – they work remarkably well.

4. Simple solutions can solve difficult problems. In the show, people often encounter large groups of zombies. Even when well-armed, it’s dangerous to start shooting zombies because the noise will simply attract more zombies. Instead, people must use simple weapons like screwdrivers, bats, axes, knives and other improvised tools.

An analogous lesson holds true for entrepreneurs. Sometimes, when faced with a challenging problem, our instinct is to look for a complex solution that might require a lot of time and effort. Often, we can solve the same challenging problem with a much simpler solution. For example, instead of waiting years to raise millions of dollars to launch your new startup, consider how you can launch for under $1,500.

5. Empower every person on your team. In a zombie-infested world, kids and the elderly, when properly trained, can provide much help to the group. Similarly, the most successful startup entrepreneurs look to empower every person on their team. Don’t look to fill a chair – look to find outstanding employees who will make you team stronger.

6. Lead by example, not by title. The best leaders are respected for the examples they set, not because of their title. In fact, some startups fail because their leadership team has fancy titles but few leadership skills.

In the show, Darryl, one of the characters is introduced to the audience in the early episodes as a red-neck who cares very little about anyone else in the group. As the show develops, we discover that contrary to our first impressions, Darryl cares for each person and constantly risks his life to save people. Darryl didn’t want to be seen as a leader – and didn’t have the title – but was very much a leader because of his actions.

Every person on a startup team can be a leader. Although many people feel that they can’t be a leader unless they’re in charge, this is simply untrue.

7. Get rid of people who undermine your team. The show demonstrates the challenges of keeping a group of people alive in a world infested by zombies. These challenges are amplified many times when some members of the team start working against – not with – the team. Similarly, entrepreneurs must ensure that everyone on their team is pulling in the same direction. If you make a hiring mistake, fix it quickly.

8. Pay attention to your health. In the show, only the healthiest people survive. If you can’t walk, you can’t run. And if you can’t run, you can’t outrun the zombies. Once you become ill – especially over he long term – you put yourself and your team at risk.

Similarly, it’s important for entrepreneurs to stay healthy. That’s not an easy goal to meet – there are many demands on your time and it’s difficult to balance everything, including your family, and pay attention to your diet and body.

If you don’t stay healthy, you will fail. Entrepreneurship is stressful. You’ve probably heard people refer to startups as roller-coasters – and they’re absolutely right. There are many ups and downs. Stress, in moderation, is good. But excessive stress is extremely suffocating and is often responsible for failure.

9. Adapt to changing circumstances and never get complacent. Anyone who’s watched the show knows that things rarely go according to plan. Just as you start to get comfortable and used to a normal routine, things change. That’s also true for entrepreneurs. Entrepreneurs have to develop good habits that help them to succeed. Here, for example, are seven habits of highly effective and successful entrepreneurs.

10. Conserve your resources. The series shows the difficulties people face in a post-apocalyptic world when they must find food, water, weapons and safe shelter.

These are important lessons for entrepreneurs. Entrepreneurs face many challenges. It’s important to focus on things that will be more likely to succeed and avoid things that can send your teams down a black hole. Successful startups adopt lean strategies to accomplish this. For example, the “lean startup” methodology can be applied to marketing as a way to conserve and amplify limited resources.

What other lessons can entrepreneurs learn from The Walking Dead?  I’d love to hear from you in the comments below.