Small Business Spotlight of the Week: The F-ing Word of the Day - crowdspring Blog 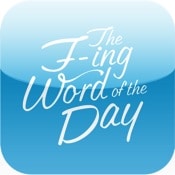 Sometimes, I really believe in fate.  Just last week I used the word “chortle” at the  cS office.  To which one of our beloved co-founders, Ross, responded with: “What is it, 1913?”  And that same afternoon, while browsing the site, I found today’s spotlight: The F-ing Word of the Day.

Note:  despite its name, the site is relatively work friendly with small, cursive-like font.

The name basically says it all.  Each day a word is posted with a definition.  You subscribe via RSS, email, iPhone app, Twitter– even Tumblr– and the word of the day is sent directly to you.  I was thrilled to learn words like “nescience” (a noun meaning a lack of knowledge) and “pugnacious” (an adjective meaning inclined to fight).  This is not your mother’s dictionary, either:  the example sentences are delightfully inappropriate.

Founder, Chris, talked to me about how learning is just easier when it involves sex, drugs and swearing:

My website uses comedy to make learning easier. When learning is incidental, rather than prescriptive, it can make a world of difference.

I suppose making something irreverent, yet sophisticated in terms of a logo can be a difficult undertaking.

Learning how to give constructive feedback. Especially when many first round designs were quite poor.

I started the site in ten minutes while waiting for Tylenol PM to take hold at the zenith of a week long bout with the flu (possibly of the swine persuasion). That’s nuts, right?

I would have built out more social channels earlier on. My site in particular is based around subscribing to daily content. When I launched, people had the option of email or RSS. Now I have it set up so that people can follow on Tumblr, Facebook, email, iPhone app, RSS, and Twitter. I’m now seeing a much higher subscription rate now that people can follow their own way.

Here are three: just do it.

We’re going to be producing flashcards for SATs, GMATs, and a few more apps. Stay tuned.

The F-ing Word of the Day’s call for a new logo received 53 entries.