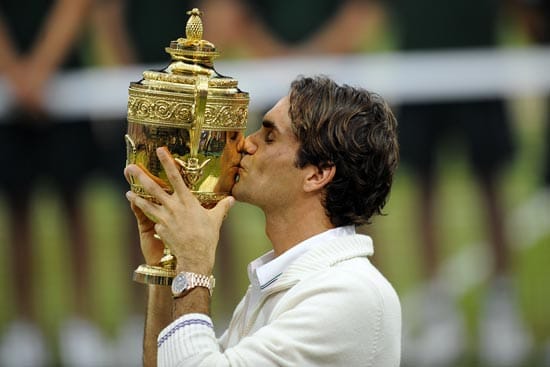 A few days ago, Roger Rederer defeated Andy Murray to win his record-tying seventh Wimbledon title. It was a phenomenal match and Federer’s 17th Grand Slam title (the most in men’s singles history). Many consider Federer the best male tennis player of all time. Federer, however, had not won a major tournament since 2010.

How did Federer win again and what can small business and entrepreneurs learn from Federer’s performance at Wimbledon?

Athletes have many habits worth emulating. But in this case, three played a very important role.

To succeed, you must believe you will succeed

Athletic competitions, just like business, are unpredictable and challenging. Seasoned entrepreneurs know that startups are like roller coasters. In the beginning of any business, your energy and excitement can drive you endlessly and tirelessly for days, week and even months. But even the most positive person will find it difficult to continue to believe they could succeed during a startup’s dark days.

Yet it is during the worst days that it’s important for entrepreneurs and small business to continue to believe they will succeed. Federer succeeded by continuing to believe that he could win, despite his losing streak and despite the commentary from others. In a BBC interview about his Wimbledon win, Federer said:

I knew how close I was for the last few years but some people didn’t quite see that. I think the belief got me to victory today, and almost two other ones in the last couple of years as well.

Many entrepreneurs and small  business owners agonize over things they and their companies can’t do well or can’t control. This is both distracting and destructive because it can often paralyze decision-making and stop progress in its tracks.

Successful athletes like Federer know that the difference between success and failure is often very small. The best athletes don’t fuss and agonize about the things they cannot do or cannot control – they focus on the things they do well and things they can control. For example, Feder, when asked about unforced errors during the 2011 Australian open, said:

I don’t care about unforced errors. The guys that love the statistics, they love those things. I don’t care if I make 20 or 60 unforced errors, I don’t care. As long as I’m doing the right things and staying true to my game plan and it makes sense. If I’m just making errors and I can’t hit any winner any more, then I’m in trouble clearly.

Consider your own business. Do you agonize over things you and your company can’t do or can’t control?

Be patient – everyone makes mistakes

You will make many mistakes in running your business. Some will seem insurmountable. No person, team or company can perform 100% all the time.

During his winning Wimbledon final match, Federer lost the first set. Many players would panic after losing the first set in a Grand Slam tournament. But Federer became more focused, concentrated on the things he did well, and patiently fought his way back. He remembered the things that allowed him to succeed previously, focused on his game strategy, and never looked back.

When you feel like giving up, remember why you previously succeeded. Don’t fear failure – learn from it.