Toblerone is a Swiss chocolate company known for its triangle-shaped candy bars. 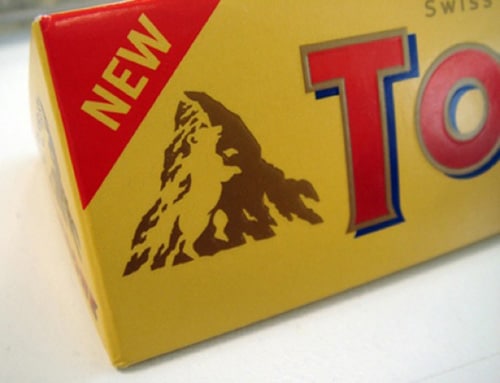 Toblerone was started in Bern, Switzerland, by Jean Tobler. His son took over the company, and in 1908, they introduced the bar with the famous triangle shape.

The business name Toblerone is a play on the names “Tobler” and “Torrone,” the Italian word for honey and almond nougat.

In 2000, the Matterhorn became part of the official logo of Toblerone, and from then on was prominent on every Toblerone pack.

Why we think the Toblerone logo design is hot

First of all… it’s Chocolate.

Second of all, a bear (symbol of Berne, where Toblerone is produced) is hidden in the modern version of the Matterhorn mountain logo. It’s a fun part of the company’s brand identity.

The Matterhorn is a great symbol of Switzerland and is said to possibly be the inspiration for the candy bar’s shape.

Since learning of the hidden bear in the logo, I stare at the bar in the checkout line at the supermarket.

If you still don’t believe Toblerone is hot… you should see the episode of Friends, where Joey can’t hide his longing for a giant bar brought home from the airport by Ross and Emily.