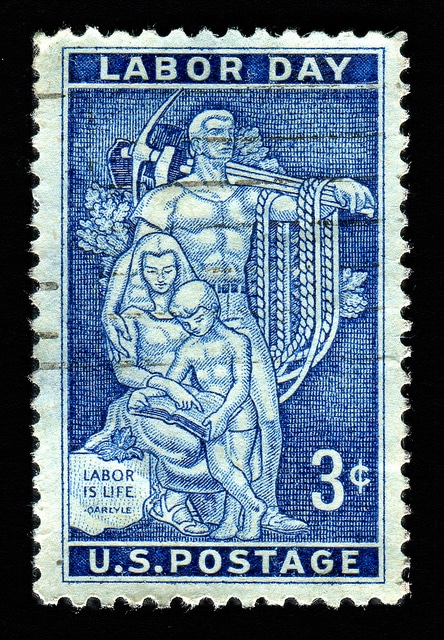 “My grandfather once told me that there were two kinds of people: those who do the work and those who take the credit. He told me to try to be in the first group; there was much less competition.” —Indira Gandhi

Next Monday is not just a day off for our team, but is also the holiday that I believe matters most of all to businesses. This time last year I wrote about the protests that were occurring around the country in support of an increase in the national minimum wage rate and the movement to empower fast food workers. This is s subject that I care deeply about, and one that is engrained in how I was raised. My grandfather was a union organizer; starting in the years of the Great  Depression and through his retirement in the 1970s, Bob Herbin worked for labor unions such as the United Mine Workers, the Amalgamated Meat Cutters and Butcher Workmen, and the International Fur and Leather Workers Union. He advocated, administered, and fought for the rights of hard working men and women for decades, sometimes putting himself at serious peril to do so. Family legend has him being shot at as he was run out of Harlan County, Kentucky and living under an assumed identity for years in order to keep his family safe. He was a profound influence on my life both personally and professionally and I try every day to run my own small business in a manner that would make him proud.

At crowdSPRING, from day one, we have worked to make sure our people are well taken care of. We offer generous benefits packages to our full-timers, competitive pay to everyone we hire, flexible policies on work hours and vacations, and try hard to maintain fun and energizing workplace. Productivity is very important to us, but so is creating an environment in which individuals can grow and learn and where they have opportunity for personal and professional development. Profits are important to us, as they are with all businesses, but top-of-mind is building a company where people want to work. The payoff comes in loyalty and low turnover – we’re proud of the fact that after 6 years in business, our average team member has been with us for almost four years! Low turnover has many benefits for a company, including reduced recruiting and training costs, improved productivity, and lower absentee rates. Not to mention the fun and friendship that happens when people look at work as a welcoming and safe place.

As a manager, it pays to be worker-centric in your approach to business and this starts with pay. Basic economic theory teaches that the most talented workers will always gravitate to the highest pay. Remember it is a competitive environment and your workers can and will go to the employer that places the greatest value on their labor. This is not just about wages, though; research has shown over and over that, while pay scale is critical, quality of life matters as much as the paycheck. Allowing your team flexibility in scheduling and office hours leads to happier, more productive and engaged work. Providing solid medical benefits leads to healthier workers and fewer sick days. Offering retirement benefits leads to stable, long-term employees who know that their future is secure. And allowing unlimited vacation days let’s them know how much you value them and messages that you trust them to find their own work-life balance while their responsibilities to the team are met.