IS THIS THING ON? HELLO? OKAY HERE'S MY BLOG POST - crowdspring Blog 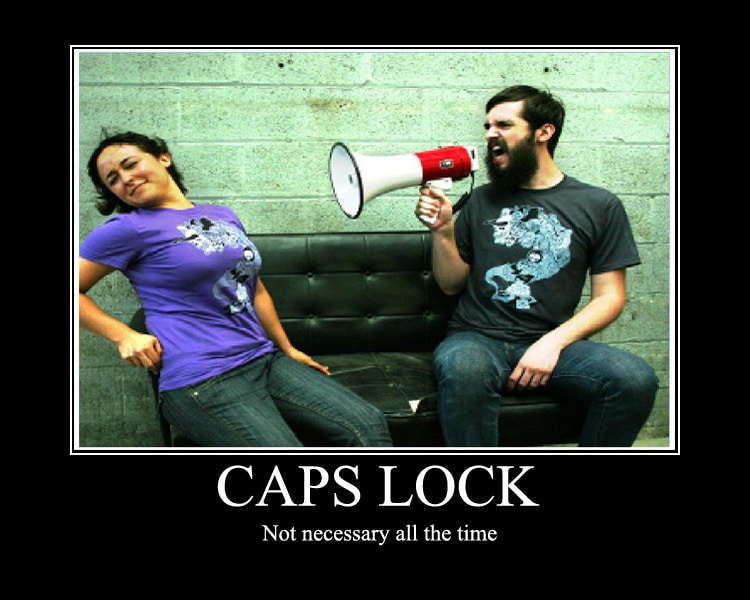 First, an admission: Back in the early days of the ol’ world wide web, I would patiently wait through the screeching sound of dial-up to spend the night in “True PUnx” or something of that nature.

Here’s where my shame comes in … every night, I would select the most hideous  shade of gamma-irradiated -Incredible-Hulk-green to type in. Looking at it would melt your eyes out sorta like that guy at the end of Raiders of the Lost Ark.

I guess it was funny to me or I was a troll before I knew what trolling was. But that was then- I quickly realized that my insights on all things True PUnx were overlooked on account of the fact my content was surpassed almost entirely on account of my delivery.

So years later, I find my penitence in the form of cruise control for cool, a.k.a: Caps Lock.

It conveys URGENCY. It lets people know you’re not just frustrated but VERY frustrated. IT ASKS YOU WITH NO PAUSE FOR BREATH ABOUT A PARTICULAR MATTER OF GREAT IMPORTANCE. It has a multitude of uses, all of which amount to shouting. And let’s not forget, it’s kinda annoying to those reading it.

And its time has come and gone. Google took the lead with a much overdue removal of the caps lock key on their new laptop, replacing it with a search button.

Is caps lock really that big a deal? Eh, in the grand scheme of things, not really. But I think Christopher Beam illustrates the point well in his  Slate article on the caps lock removal:

“Modern-day personal computing—surfing the Web, writing school papers, chatting online—doesn’t require nearly as much capitalization. As of 2010, the most-common Caps Lock users are enraged Internet commenters and the computer-illiterate elderly. The key’s location makes it a frequent target for an aCCIDENTAL STRIKE when your pinky reaches for the ‘a.’ Worst of all, Caps Lock occupies prime real estate that could be deeded to a more useful key, like Control or even a second Enter button.”

We have so many awesome ways of communicating with one another, and new ones are popping up every day. But unless we take a step back and work more on how we’re expressing ourselves, the actual focus of our message will get lost.

What do you guys think? Are there any caps lock advocates out there? What other features need to be put to pasture. We’d love to hear from you in the comments below.

Aw, heck. I can’t resist: THANKS FOR READING.