There have been some wonderful discussions taking place in the forums on the subject of concept-copying and the ethics of incorporating existing ideas or images into one’s own work. It’s fascinating to listen to the different perspectives and to understand this small piece of the creative process. I am not an artist, but one need not be to understand that artists influence one another in ways great and small. Just as Brian DePalma will copy a trademark Hitchcock shot as an homage to the master, or as Aaron Copeland would incorporate musical quotations from American folk songs into his compositions, artists have always found material to respond to in the works of other artists.

Now, I am not talking about the out-and-out plagiarism that sometimes occurs in the world of literature or scholarly writing. Nor am I talking about the literal copy-and-paste jobs that happen in the world of design. I am talking about artists incorporating themes or elements from the works of other artists who came before them. Sometimes an image is so powerful, so evocative that an artist may use it in their own work to evoke that same feeling. In one of our forum threads there is a lively discussion on the relative ethics of using the famous image of Rodin’s “The Thinker” in one’s own work, and this got me thinking.

We took the whole gang to Lollapaloza this past weekend, and I was fortunate to see an artist perform whose entire act is based upon his “use” of other artist’s works. Girl Talk is the stage name of Greg Gillis, a former bio-medical engineer from Pittsburgh, turned club DJ. Girl Talk is a master of the musical mashup, incorporating works from other artists, including songs from Boston, Elton John, Paula Abdul, and Sonic Youth among hundreds of others. The Chicago Tribune said that his act is “based on the notion that some sampling of copyrighted material, especially when manipulated and recontextualized into a new art form is legit and deserves to be heard.”

So the question is: does Girl Talk’s work constitute theft of intellectual property? Is it unethical for him to incorporate other artist’s work into his own? Should he be sued for copyright infringement? In my opinion, the answer to all three questions is no. Mr. Gillis does not “copy” music nor does he perform covers, but rather he use “quotes” to inform his own art. He uses the work of artists who came before him to make statements about the world around him, and to showcase his own curiosity about, and tastes in, a wide range of musical styles. “Still Here” from the new album “Feed the Animals” is a great example of Girl Talk’s art. When the melody line from Procol Harum’s “Whiter Shade of Pale” is mashed with “Good Life” by Kanye West and “Damn” by the Youngbloodz, and Girl Talk adds samples from 21 other artists (including Michael Jackson, Radiohead, The Band, 50 Cent, and Cat Stevens) along with his own unique rhythms, raps, and melodies, he takes iconic and evocative pieces and creates something completely new. The magical/sad quality of the Procol Harum classic and the power and rhythm of “Damn,” combine in a completely unexpected manner to evoke longing in a way that neither piece could on its own.

The same would go if a graphic designer were to incorporate the image of Rodin’s the thinker into a larger, unrelated piece. S/he would not be creating a forgery, nor would they be trying to profit directly from Rodin’s work. Rather this designer would be creating a new work of art, which uses Rodin’s image to evoke a feeling, or make a statement. To me this is what artists do – look for inspiration wherever it is found and leverage that to create new wonders of their own 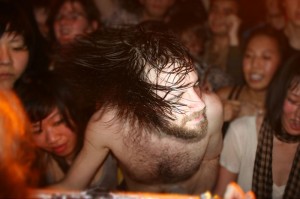 Photo: Gwazda (This work is licensed under the Creative Commons Attribution-ShareAlike 3.0 License)