In Defense of the Renegade Marketers - crowdspring Blog
2%

With the dawn of social media and explosion of internet access across the globe came a revolution in marketing. New channels were available with larger audiences, more segmentation opportunities, and a myriad of engagement opportunities. The possibilities were endless. Indeed, we’re still exploring them.

But with these possibilities came no small amount of chaos. Curious minds outpaced establishment marketing types in understanding and utilizing these new tools, and as a result, the language we use to frame conversations about marketing began to evolve. As folks tried to merge the new terminology with existing rhetoric on the fundamentals of marketing, they realized something: it was a mess.

In a recent article for Tech Crunch, Logz.io Director of Marketing and Communications Samuel Scott put it this way:

I could run an advertisement during an episode of “Friends.” I could pay NBC to have the coffee house hold an event that would feature my product in an episode. I could hire a “Friends” actor to appear in an infomercial that would air directly after an episode. And so on.

Some feel like this linguistic train wreck is a function of many modern marketing thought leaders today coming from diverse backgrounds. In an article for Marketing Week, branding professor and marketing consultant Mark Ritson highlighted the growing schism:

Sitting on a train on Friday grading exam papers I got a tweet from marketing consultant Glen Gilmore. The tweet was a little grid of 24 headshots and the message, “24 Marketers you Should Follow on Twitter”.

Intrigued, I clicked the link and discovered it was actually an article by Nicholas Scalice for Earnworthy.com in which he presented a list of his “24 top-notch marketers”. I scrolled through the list. Some of the faces were familiar to me and I smiled when Gilmore himself appeared. I was about to head back to my exams when I had a fantastically cynical thought. “I wonder,” I said out loud to the immediate concern of the woman sitting opposite me, “how many of them have actually studied marketing?”

Do you know how many have a formal training in marketing of any kind, according to their LinkedIn profiles?

In that whole list of 24 world-leading experts in marketing only four have a formal education in the subject. There was one MBA, two undergraduate degrees and a community college certificate.

Now that’s not to say those other 20 thought leaders aren’t intelligent people. They have degrees in all kinds of subject areas – electrical engineering, English literature, political science. It’s just that they don’t have any training in the thing they are meant to be telling you about. The author of the article, himself an expert in “inbound marketing tools” (bachelor’s degree in criminal justice, master’s in public administration), had managed to pick a list of people that are less well trained in marketing than the average local PR agency.

There might be some merit to these lines of argument. These gentlemen are correct in that many of the buzz words used in conversations about marketing today (including here) don’t fit in the traditional marketing framework. And they are also correct in that we sometimes focus too much on trendy tactics and not enough on critical thinking about overall strategy, which could be a function of digital marketers boasting less formal training in their fields.

Part of the reason the language doesn’t fit is because language isn’t static; it evolves right along with the rest of the world. And just like we experience growing pains while adapting to evolution in every other part of our lives, there’s going to be some awkwardness as we figure out the best ways to talk about marketing strategy in the modern era.

I know — radical concept, right? But stick with me for a minute.

Lots of folks who like the conventional marketing rhetoric will try to explain that it still works by putting modern initiatives in the old school wrapper. Scott, for instance, attempts to recast conversations about content marketing by placing some of the elements involved into a more traditional framework, writing:

If someone creates informational material that aims to rank highly in Google search results, here is what he is doing:

That’s not an inaccurate breakdown, but it is woefully insufficient for someone engaging in marketing right now. Sure, you’re probably working to advance your SEO goals with a blog post, but any modern marketer worth their salt will also be chasing other goals with the same piece of material. You write to provide value to your audience. You write to position yourself as an expert. You write to open up engagement opportunities for lead acquisition, conversion, and brand awareness.

We have, in so many ways, outgrown the “buckets” approach to marketing. Our marketing strategies today are sprawling, with defined initiatives peppering broader tactical execution. Content is dispersed along multiple channels with different goals and measures of success. What qualifies as PR or advertising has changed dramatically with the introduction of opportunities for native advertising and services like PRWeb. 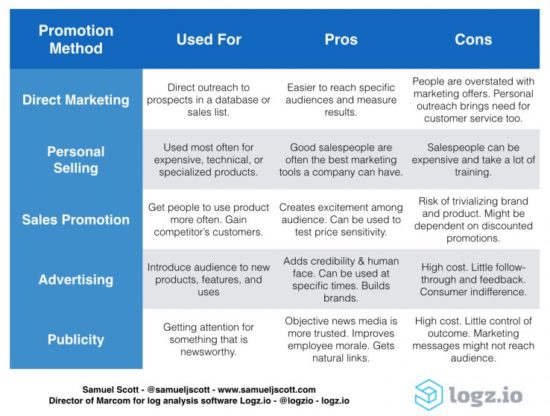 And some of the work we’re doing doesn’t fit in any of the buckets at all. For example, how, exactly, would you classify something like tweeting out something off of Giphy to make a joke about a trending topic in a way that shores up a carefully cultivated brand persona, but doesn’t directly relate to your unique value proposition?

If Scott is correct when he says, “[t]he terms that we use reflect the assumptions that underlie our approaches to marketing,” we’re in a bit of a pickle. Yes, the terms we lean on today might be muddled, but the terms being presented as an alternative rest on assumptions that just don’t jive with the reality of modern marketing. Our strategies are so much more complex now.

Now, one could argue, as both Scott and Ritson do, that this isn’t the case. One could argue that the “necessity” of changes in marketing rhetoric is being driven by those without enough formal marketing training. But such a perspective is short-sighted and out of touch.

The fact of the matter is that we live in a world where the idea of the “self-made man” is more potent than ever. Proliferation of the internet has spawned millions of opportunities to teach yourself new skills or trades. Knowledge that used to be walled off to those without the means to seek out higher education is now easily accessible. Though there is indubitably value in such programs, they are no longer necessary to achieve proficiency in most arenas.

This is something we see all the time at crowdSPRING. Our designers are a diverse bunch. Some of them were classically trained in four-year programs. Some of them took courses at a community college. Some taught themselves to use the Adobe Creative Suite while their little ones napped. The best on the platform continue to educate themselves in order to stay fresh and competitive. Respect the hustle, folks.

So you’ll have to forgive us for finding the idea that someone without a “formal” education in marketing is somehow not educated in marketing at all utterly foolish. You know what people don’t necessarily list on LinkedIn under education? The hours and days and weeks and months and years spent on attending webinars, watching video tutorials, listening to podcasts, reading informational materials, and practicing their techniques. Not to mention participating in things like Ritson’s own “Mini MBA in Marketing” program… which I’d bet talks about the traditional promotional mix that he complains folks can’t learn outside of a formal education.

And the whole idea of sneering at established marketers without a formal marketing education seems nonsensical. Yes, there are certainly self-proclaimed experts in marketing out there who are anything but, just as there are people who claim to be experts in all sorts of things who can’t walk the walk. But these non-formally-educated experts in marketing got to where they are because they can and do on the daily.

So what are we trying to accomplish by sighing at their degree choices? Are their quality results somehow less impressive because of their educational pedigree?

I don’t get it. I really don’t. Would you criticize someone with a successful business because they didn’t study business before launching their own company? Or would you hold them up as an example of how hard work and creativity can win the day?

These folks without a formal background in marketing are so good at marketing that they now command massive followings — followings they were able to build because they know what they’re doing. So why is what they studied once upon a time somehow disqualifying?

If anything, the past decade has demonstrated that there is value in diverse minds coming to the marketing table. It wasn’t the old guard trailblazing in the early days of social media; it was individuals and small businesses taking risks and learning fast. You have to wonder if they would have made the same strides if they’d carefully constructed their approaches to align with the 5 P’s.

It is totally valid to argue we should come up with more concise language and frameworks for discussing modern marketing. It is absolutely legitimate to say we shouldn’t lose sight of the basics as we explore our strategic options. But complaining that people don’t use language that doesn’t fit right anymore? Criticizing thought leaders because they don’t have a homogeneous background? It’s unproductive at best and insulting at worst. Let’s do better.

And as for the rest of you renegade marketers out there — you self-taught linguistic corrupters with degrees in political science and wild ideas that challenge the status quo — we salute you! Stay crazy.