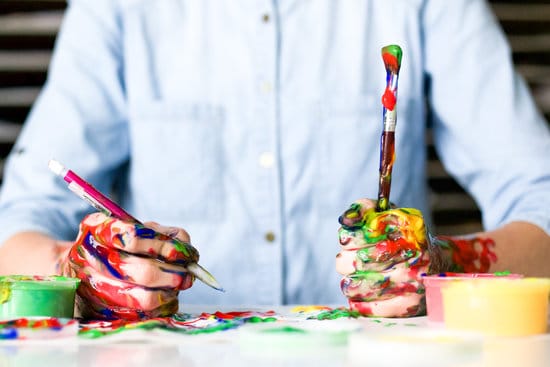 And yet, the innovation and solutions creativity generates have incredible value.

What if I told you that there is a method to the madness? That you, too, can innovate and problem-solve with the best of them?

Enter “Design Thinking,” a strategic method used every day by designers and creatives.

Design Thinking is a methodology used by designers to solve complex problems for clients.

Or, as I learned to think of it when I was getting my degree in design: “The Process.”

What exactly is the process? While there’s plenty of wiggle room within the basic structure, it boils down to just four basic steps: empathize, brainstorm, prototype, and test.

The design thinking process may have originated with designers, but the business world has started to take notice because of the agility, speed, and innovation that it promises.

Let’s take a look at several companies that have embraced design thinking to great effect and how you can, too.

It all starts with empathy.

“Strategic design thinking has one single goal: to understand and solve a problem for its consumer,”  says Rakia Reynolds of Skai Blue Media.

To understand and solve a problem, one must start by empathizing with the people who are experiencing that problem.

Successful entrepreneurs succeeded, in part, because they fully understood the problem they were solving. Before writing a business plan and long before starting a business, they conducted market research, talked to potential customers, and carefully assessed the depth and breadth of the problem and the people who experienced that problem.

Even established businesses can turn things around by embracing this form of thinking.

Dutch fabric manufacturer Vlisco was a company in danger until their design thinking team discovered new avenues for business growth by empathizing with their consumers. Vlisco products had dominated the African fashion textile market for most of their roughly 170 years.

However, evolving technology in fabric manufacture and a subsequent increase in Chinese competition had Vlisco worried. According to Karen von Schmieden of This Is Design Thinking,

Vlisco recognized the necessity to transform from a traditional trade oriented business into a value adding business.

The key to this evolution turned out to be the first principle of design thinking- empathy.

Empathizing with your consumer allows you to better understand their needs, in turn giving you the tools to meet those needs.

Vlisco formed an Innovation Team responsible for finding a solution to their predicament. This team focused on understanding their consumers’ experience as the starting point.

“We did a lot, and I really mean a lot of ethnographic research,” said Betty van Breemaat of Vlisco’s Innovation Team. “We spent a lot of time with our actual consumers, talking to them, understanding their problems and filming everything. Something that hadn’t been done before within Vlisco.”

By mapping its customers’ experiences, Vlisco was able to discover the challenges its consumers faced. Understanding and solving these challenges provided a path forward.

As a result of Vlisco’s design thinking process, it developed two new services. 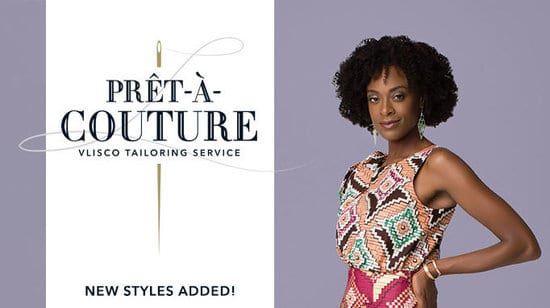 Image courtesy of VliscoThe first new service- Prêt-à-Couture -supports their consumers through the process of having their Vlisco fabrics transformed into wearable garments.

The second service is the Style Configurator, an app that allows customers to preview fabric prints in different style silhouettes to help them determine how they would like their finished garment to be designed and constructed.

These innovations are a direct result of the design thinking model they followed. Taking the first step of empathizing with their customers gave Vlisco the insight needed to serve their consumers in a new way.

“By adding value to our product and embracing the African fashion industry, Vlisco secures its future. Africa is changing and we need to change as well, it’s the only way.” – Betty van Breemaat

Question consumers, question experts, especially question the things that everyone assumes are a given.

During this time, don’t be afraid of things getting… emotional. Jon Kolko of the Harvard Business Review notes,

…organizations that “get” design use emotional language (words that concern desires, aspirations, engagement, and experience) to describe products and users. Team members discuss the emotional resonance of a value proposition as much as they discuss utility and product requirements.

Once you’ve truly wrapped your head around the logistical and emotional challenges your consumers face, it’s time to use that newfound understanding to brainstorm possible ideas.

Swedish telecom giant Ericsson has developed their own internal design thinking-based innovation system called Innova that they use to brainstorm and workshop ideas. It aims to harness the raw entrepreneurial talent of its employees. Eric Chang, head of strategy and operational development for Ericsson, says, “ It essentially functions as a startup incubator within the company. ”

Innova began as an initiative for the Ericsson product development teams in San Jose but spread to the whole company.

It was one unit introducing design thinking in their organizational structure and it became an innovation practice. A practice that they now share with the whole company. 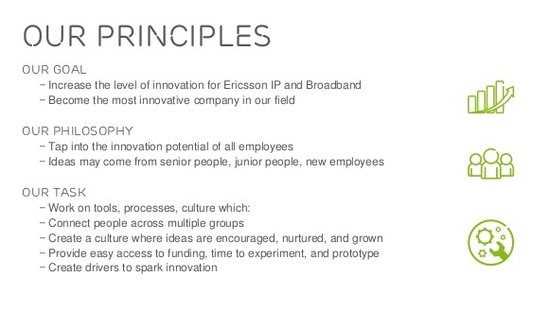 So how does it work?

Employees submit their ideas via the Innova platform, where they are discussed. Promising ideas that generate excitement are selected to move forward with a prototype. Ericsson’s Innova has embraced design thinking and empowered its employees in a big way.

In the first three years of the program’s implementation, Innova has gained 6000 users and logged 4000 ideas. 450 of those ideas received first-round funding, and 45 received second-round funding. Chang reflects,

At Ericsson, design thinking unleashed the untapped potential their employees had always possessed. Your company may not have its very own design thinking software, but you can still follow Ericcson’s brainstorming lead.

Create a safe environment for innovation

Guide your brainstorming by first posing a question. Forbes contributor Jeena Cho recommends the following format, “How might we help [our user] with [her specific need] given that [insight you’ve gained into her situation]?”

With your question framed, you can begin to start collecting ideas.

To truly get the most out of your brainstorming sessions, encourage all answers, all ideas. This is not the time to edit. Creating a safe environment for all solutions- no matter how crazy they might sound- is vitally important.

Only after you’ve exhausted your well of ideas should you begin to sort and edit. Your brainstorming session’s final step is to choose the most promising ideas to carry forward and prototype.

Prototyping may be the most unique element of the design thinking protocol. It requires you to create a tangible model of your idea.

Prototyping is also the stage in the process where you begin to flesh out your idea fully. Giving it some form requires that you think through all aspects of the idea, plan, or product.

And this is important- the prototype should be executed simply and quickly. Warren Berger explains:

Whether it’s a napkin sketch, a prototype carved from foam rubber, or a digital mock-up, the quick-and-rough models that designers constantly create are a critical component of innovation — because when you give form to an idea, you begin to make it real.

In 2015 the San Francisco Opera discovered the value of fast prototyping and became a speedier, more agile organization in the process. Like most of the world’s oldest opera companies, SFO is an organization steeped in tradition (and superbly high production standards). But tradition combined with perfectionism can have a way of slowing a company down. Matthew Shilvock, SFO’s General Director, described their perfectionism as,

our blessing in allowing us to produce moments of exquisite theater, and our curse in terms of not giving us the flexibility to adapt quickly.

The SFO is a non-profit organization that survives mostly on donations, endowments, and grants, with ticket sales making up only a small part of their revenue.

One way of growing ticket sales is to pursue the prized white whale of opera attendees- younger audience members. Two students of Stanford’s d.leadership: Design Leadership in Context class, David Zena Barakhat and Madhav Thattai decided to take on that challenge with the SFO.

Over the course of their time together, Barakhat and Thattai encouraged the members of the SFO team to embrace rough prototypes – a concept that was particularly challenging in the SFO culture. This process led the team to plan several informal events that were popular with their younger potential audience.

The experiment’s success encouraged “a new commitment to innovative thinking and creative brainstorming” at the SFO, according to Shilvock. Building on their success, SFO formed innovation teams called iGroups to continue their momentum after their project with Thattai and Barakhat was complete.

Design thinking is liberating for a company tightly constrained by contracts and expectations!” He also noted that it “opened the door for us to be a more creative, questioning, and iterative organization, a little more willing to try and fail.

What can you learn from SFO’s experiences?

First off, create prototypes of your ideas. You’ll be amazed by how much you will learn during this modeling process.

Second, avoid sinking tons of time, money, and effort into your prototypes. Investing little time and effort provides flexibility; and, by keeping the stakes low, a prototype can succeed or fail, and either result is okay. This means that you’re free to test more prototypes- leading to greater learning and more potential solutions.

Once you have your prototype(s), it’s time to test.

The form that your tests take will depend on your field and your goals.

The SFO held several prototype events and gathered feedback from their attendees. Ericsson tests the ideas pitched on Innova offline and then reports the results back on Innova. Vlisco tested their Prêt-à-Couture services with consumers within one of their retail locations.

When testing, failure is an option

Tests should be executed as quickly and inexpensively as possible. As my design professor liked to remind me, “Don’t get too precious with it.” Jeena Cho elaborates more fully in Using “Design Thinking” to Navigate Uncertainty,

Designing is an iterative process. Don’t expect to hit the nail on the head on your first try.

This is a fundamental concept: failure is okay.

Let that sink in for a minute.

A failed test teaches us something. That information can allow us to eliminate or modify a prototype, saving a company (or designer) from a costly mistake on a larger scale. Jon Kolko points out of Apple (a company known for its design thinking approach) that “The company leverages failure as learning, viewing it as part of the cost of innovation.”

If your prototype does not test well, you may follow up to re-evaluate, modify and re-test; or you may pursue a new prototype for a different idea entirely. Either path is okay. John Kolko explains.

In a way, the design-thinking process is circular. The testing phase allows us to gather additional insights that perhaps didn’t surface during the initial discovery phase.

Suppose your tests are successful- great! Now you’re ready to use the information you’ve gathered to refine and launch your new product or initiative.

That’s what it takes to join the design thinking movement. These four steps can make your business more agile, more innovative, and more successful.

Go ahead, try it. Your business will thank you.