A year or two ago, it would have been unthinkable. Even as the vote grew closer, most predicted it would fail. The exit polls suggested we were safe. But when the more than 33 million votes cast were finally counted, it became a dizzying reality: Britain had voted to leave the European Union.

Global markets turned chaotic as that reality hit. The pound fell below even 2008 levels to its lowest point since 1985 while the Euro fell against other world currencies. Volatility surged while stocks went into free fall. And though the ECB and Bank of England quickly told the public that they had earmarked money for market stabilization, their promises weren’t exactly reassuring. After all, the vote is only the tip of the iceberg here. What comes next? What does Britain leaving the EU even look like? There’s talk of Scotland and Ireland seeking independence and other EU nations plotting exits of their own, as well. Mix in a contentious U.S. election cycle, the ongoing refugee crisis flowing out of the Middle East, and geopolitical tensions with Russia, and it’s no wonder the Brexit vote’s got the world like…

Hold up, you might be saying. What on earth does this have to do with a company trying to grow?

Unless you actually live in Europe, this might not seem immediately alarming — concerning, perhaps, but a world away. But even if you’re running a startup out of your basement in Omaha, this is a situation to which you should pay attention. You might not be directly impacted in this moment, but the shock waves sent out by the election results may have a significant impact on the ever-shrinking global environment in which your business is operating.

We’re not exactly at 2008 financial crisis levels just yet, but global economic events like these tend to weigh heavily on things like credit markets, investment portfolios, investor confidence, consumer confidence, and consumer spending. For startups and small businesses, these shifts can have a major effect on the trajectory of your company.

What can you do to prepare for the brewing storm?

Talk to your money people.

Investment advisers, financial planners, accountants: oh my. Love ’em or hate ’em, now is the time to reach out and talk game plan. Make sure you’re in a position that’s not only appropriate for your available risk capital and risk tolerance, but is appropriately insulated from the most likely potential sources of volatility in the markets in the coming months. To be clear: this isn’t us giving you financial advice. This is us telling you that now is a good time to go seek such advice from financial professionals.

While it’s always important to be shrewd about managing your business costs, climates like the one emerging today can be particularly brutal. Take advantage of the burgeoning non-traditional labor market and opt for contract work where appropriate to keep your overhead low without leaving yourself exposed. Crowdsourcing is always a good tactic here.

Keep your eye on the prize.

Even as you pinch pennies, don’t put yourself in a situation where you’re neglecting your brand. If anything, consciously choose to invest in solidifying your brand’s image. When the economy seizes, a strong competitive position is what will keep you afloat, and a strong brand is the cornerstone of your competitive position. Keep that web design fresh, your social accounts active, and your pixels on point.

In times like these, it’s tempting to play it safe at all costs. No big changes, no big risks. And while an ounce of caution is certainly warranted in the face of volatility, and some conservative plays make sense, you can’t stop moving. Content, email, and social media marketing are relatively low cost options for creatively engaging your target market. 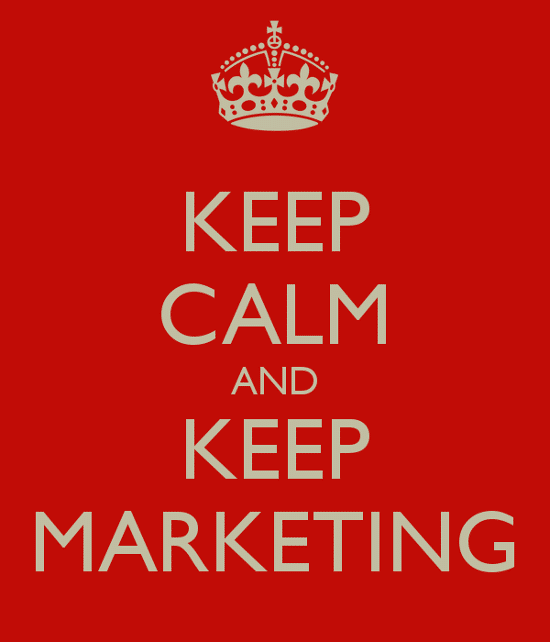