Hey Designers: Do You Want Your Artwork Visible On Google Earth!? - crowdspring Blog 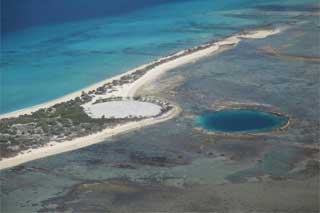 See that round, white, dome in the picture?  Yeah, the one next to the asteroid crater? Picture a mural you designed on top of it.  That’s your potential canvas for the Bikini Lines project. [Photo by Brad Templeton, www.templetons.com, used with permission].

The Bikini Lines project is an awesome combination of art, adventure, documentation, and collaboration.  The Cactus Dome (pictured above) is located in the Marshall Islands and is nestled on a relatively remote part of the island cluster in the South Pacific. The dome was actually built by the U.S. government in the 1970’s to house nuclear waste. The folks behind the design contest decided that not only was it the world’s largest canvas, but could also be a powerful way for islanders to reclaim part of their history. They approached the Marshall Island’s government, they were totally into it, and Bikini Lines was born. There’s an IndieGoGo campaign to fund the project, with an eventual goal of giving the proceeds of the documentary to aid Japanese children who were orphaned in the 2011 earthquake and tsunami.

Now down to the nitty-gritty, how do you become involved?

The 10-20 designs that are favorited the most and that receive the overall greatest positive response will be shortlisted. Bikini Lines (and the Marshall Islands government) will make the final decision on which design will be painted.  The winner will appear in the documentary and any subsequent work generated from the dome design will be 100% theirs.

The actual, physical painting will take place in December 2012 and the winning designer will be flown to the site and help paint the Cactus Dome. And yes… all expenses will be paid.