After answering 40,000+ customer questions, we’ve seen our share of pretty unusual questions. Last week, a customer sent us a note with a simple statement: “Hello whores.”

Now – while people sometimes are confused about what we do at crowdSPRING (look to the right of this sentence for the explanation if you’re unsure), we’re pretty sure that few people mistake us for the Bunny Ranch in Nevada. The customer’s actual request is below:

Pete (our Director of Marketing) wasn’t stumped and politely responded:

I can only imagine what the customer was thinking. I suspect she quickly realized that we weren’t the Bunny Ranch (which is good news for many reasons, and particularly because Pete’s mom regularly reads this blog and thinks that Pete works at an Internet startup).

Since Khaya (the customer) and Pete had such a pleasant exchange of greetings, Khaya asked for help with an issue that, at least in Khaya’s mind, is somewhat related to prostitution – the very important issue of vegetarianism and moral high ground.

Pete eats more peanut butter sandwiches than my 3 kids combined.  While I wouldn’t call him a cannibal, he’s clearly not a vegetarian.

It so happens that Pete has a soft spot for intellectual discussions about moral high ground – especially with people who initially assume that we are whores. We all have weaknesses – and that happens to be Pete’s. So, Pete crafted this wonderful, detailed response offering the best guidance he could, to our customer Khaya. 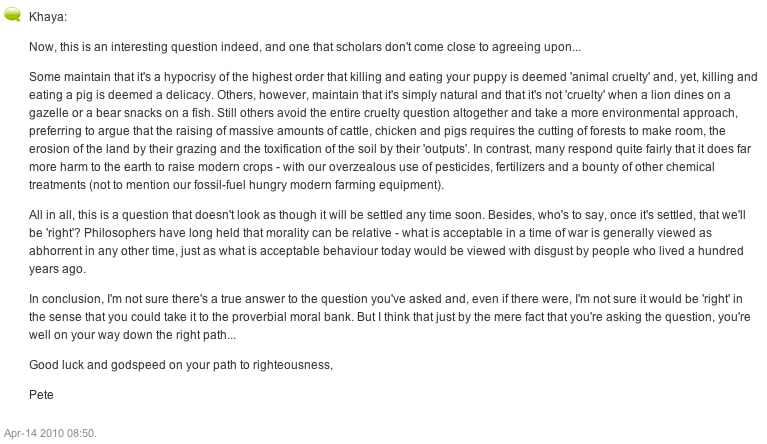 Do you think the Bunny Ranch’s customer service team could have answered Khaya’s question as carefully and thoughfully as Pete did? I don’t think so. 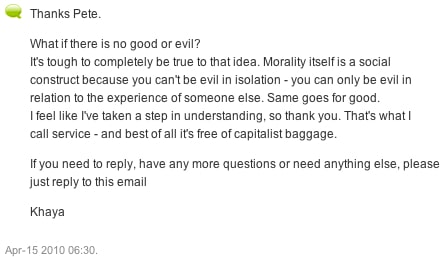 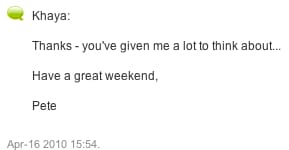 What’s the strangest question you’ve ever heard from a customer?