However, more recent (and more authoritative) research questions and contradicts the conclusions reached by Forrester.

A report released earlier this year by Altimeter Group – The Rise of Digital Influence – discusses, among other things, digital influence and ways that companies can identify individuals with social capital who can increase word-of-mouth for a company’s marketing efforts.

While many studies have focused on the U.S., studies done in other countries reflect the same conclusion – friends do influence purchases on social networks. For example, a Harvard Business School study in Korea found that moderate users of social networks reflect a 5% sales increase over the average, based on the influence of their social network friends.

We’re seeing more and more credible research, including from Altimeter Group, suggesting that social influence does, in fact, translate into increased sales. Notably, a new report just released by Market Force suggests that 81% of U.S. consumers are influenced by their friends’ social media posts (The Market Force study measured 12,000 survey respondents – half in the U.S. and half in the UK. Respondents ranged in age from 18 to 65 years old – 75% were women (the primary household consumer purchasers).

Other studies reflect similar percentages. For example, a study conducted by the firm Chief Marketing Officer Council and Lithium, found that 80% of people are more likely to try new things based on their friends’ suggestions in social posts.

But here’s where it gets a bit more interesting – the Market Force study reveals that a comparable 78% of people are influenced by the companies‘ own social media posts (see following chart).

Some small businesses worry that their social media efforts will simply uncover a hornets nest – inviting consumers to publicly complain about those businesses. This is generally untrue. “Social media channels create an ideal two-way platform for direct conversations with customers. What’s striking is that consumers have more positive things to say than most brands realize,” according to Janet Eden-Harris, chief marketing officer for Market Force. “Using social media monitoring tools, brands can mitigate the downside by pulling negative comments into a private conversation, and maximize the upside by giving consumers an easy way to engage. There’s no reason not to take the plunge. Consumers are out there talking about you.”

Before you rush to start posting on social networks, you should understand that consumers are rarely interested in rich “content” – they care mostly about promotions, sales and giveaways, as the following chart from the Market Force report shows.

What can/should your small business do, in light of this data?

Second, the promotional, sale and giveaway content should be a regular tactic in your social media efforts. While many small businesses work hard to build thought leadership in social media, the research suggests that most purchasing decisions are influenced by discounts and incentives, not merely by great “content”.

Third, you should consider your business and your industry and decide whether social media makes sense for you. For example, the Market Force study shows that consumers “like” restaurant pages 86% of the time – far more than any other category on Facebook. If you have a restaurant, you definitely should consider a social media strategy.

On the other hand, if your business is in the financial services space, you should think twice – only 13% of U.S. respondents and 7% of UK respondents “liked” companies in the Financial Services industry. 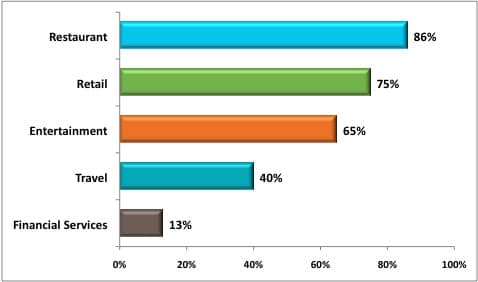 Fourth, as you develop your social media strategy, we strongly recommend that you test your tactics in small batches, listen carefully to your customers, and learn fast. More about this in our Lean Marketing Strategies for Small Businesses and Startups post.