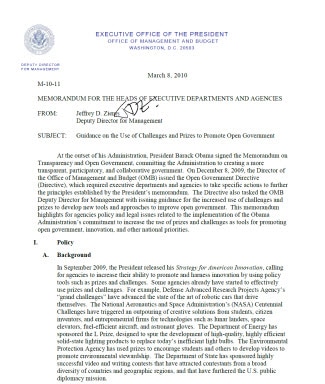 The White House has embraced crowdsourcing, urging federal agencies in a memo issued on March 8, 2010 to use challenges and prizes to crowdsource innovative approaches to governmental initiatives and programs. Within the next 120 days, the administration will release a web-based platform to manage the government’s crowdsourcing efforts.

Some of you might recall that the U.S. House of Representatives recently ran a web design project on crowdSPRING. The project was a phenomenal success and the new web design has been launched – you can see it here.

Earlier in 2009, Representative Mike Honda (15th district of California – which includes Silicon Valley), ran a project on crowdSPRING for the redesign of his website. That project was also a phenomenal success and the new design can be seen here.

The government’s embrace of crowdsourcing is connected to President Obama’s goal to create a more transparent, participatory and collaborative government. Here’s the opening paragraph of the government’s memorandum:

At the outset of his Administration, President Barack Obama signed the Memorandum on
Transparency and Open Government, committing the Administration to creating a more transparent, participatory, and collaborative government. On December 8, 2009, the Director of the Office of Management and Budget (OMB) issued the Open Government Directive (Directive), which required executive departments and agencies to take specific actions to further the principles established by the President’s memorandum. The Directive also tasked the OMB Deputy Director for Management with issuing guidance for the increased use of challenges and prizes to develop new tools and approaches to improve open government. This memorandum highlights for agencies policy and legal issues related to the implementation of the Obama Administration’s commitment to increase the use of prizes and challenges as tools for promoting open government, innovation, and other national priorities.

We applaud the federal government for embracing crowdsourcing and supporting innovation.