Even in non-recessionary times it can be difficult to get a new business off the ground. Start-up costs are high, investors are keeping the purse-strings tied tight, and customers are not exactly spending with élan. The restaurant business, traditionally a hothouse for entrepreneurism, suffered greatly in the current downturn but is rebounding, with industry-wide sales trending upwards over 2009 and restaurants hiring again, albeit slowly. This doesn’t mean that it’s any easier to open a restaurant today, but some really imaginative chefs are getting around this and a couple of interesting trends have developed in cities across the country.

The question for a chef who wants to start her own restaurant today is how to build an engaged and loyal audience and do so with less risk and lower startup capital. Part of the answer lies in technology, mobility, and a smaller footprint which allows for iteration and evolution of the business as it develops, without the relentless pressure of huge overhead. Well, two models have appeared in the last couple of years which may radically change the industry and how foodies consume the latest in chef-made goodness.

In cities across the country (led by Los Angeles) people are flocking to food trucks for their lunches (and breakfasts, dinners, and desserts) where young chefs are creating gourmet meals and serving them through the window of the truck to folks who not only line up by the dozens, but follow these businesses online via Facebook and Twitter to find out where they’ll be parked on any given day. One of the first and most famous of the new-wave of food trucks is Kogi Korean BBQ To Go, an LA-based company whose fleet has grown to four trucks selling a completely delicious hybrid blend of Korean-Mexican delights. 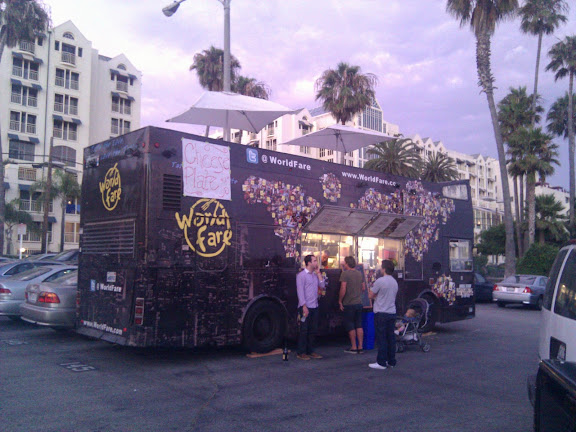 Kogi has almost 70,000 Twitter followers (@kogibbq), a web-based schedule so fans can see where the trucks will be on any given day, and has garnered tons of media attention, only adding to their legend. Competitors have sprung up and one organization that represents these young businesses, the Southern California Mobile Food Vendors Association, lists 66 members on it’s website. One of these companies, World Fare, even sourced the design for their truck (actually a double-decker bus, with seating on top) via a crowdSPRING project!

Another interesting model has been wandering around Oakland, California this year. A group of young chefs (many of them alums of the legendary Berkeley restaurant Chez Panisse) unable to fund their own restaurants, banded together to find an audience for their creations using a new model. They call it “The Pop-up General Store,” and it  is a cousin to both the food-truck and the old-fashioned farmer’s market. Together with the trucks, Pop Up General Store begs the question: does an aspiring restauranteur really need square footage, armies of staff, tables and chairs, and all of the accompanying overhead when they have the option to be the Bedouins of the food business?

Samin Nosrat and Christopher Lee started the venture after their own restaurant failed last year. They assembled a small group of chefs, rented some industrial space for a day, posted the dishes that would be available for take-out, and took orders from customers online, who then stopped by and to pick up their pre-ordered fare. The first pop-up this past winter included just a few chefs and a few dozen patrons. The latest event (video above) included dozens of chefs and hundreds of hungry foodies who together spent thousands of dollars. The organizers are holding these new-wave farmer’s markets every few weeks at different locations and attracting a loyal and growing following through their blog and Facebook group.

These two models, both leveraging social media to fuel growth, build loyal audiences, and deliver a direct-to-consumer solution are leading the way for many businesses. Gotta love these inspriational new ideas and the entrepreneurs who are their midwives.