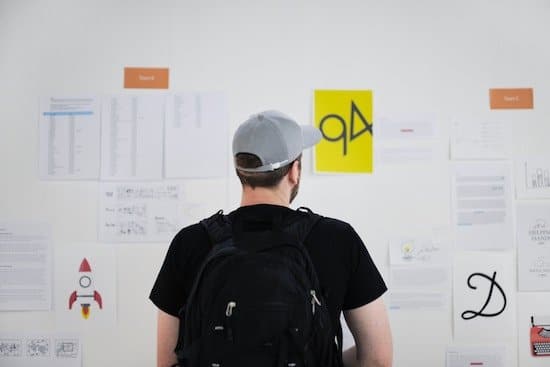 When starting a new business, every entrepreneur wants their company to be popular and for its logo to be instantly recognizable and famous.

In fact, some entrepreneurs think that companies become famous because they have great logos.

For example, Nike, McDonald’s, and Coca-Cola have instantly recognizable and famous logos, but each has spent hundreds of millions (if not billions) of dollars to promote their brands.

A strong brand identity starts with a strong company name and a good logo design.

Yet, most entrepreneurs and small business owners don’t understand the key fundamentals of logo design.

Understanding these design elements can help you find a terrific logo for your business.

Ultimately, when it comes down to creating a highly recognizable, memorable logo, you need good design. As the “I Love New York” designer, Milton Glaser says,

There are three responses to a piece of design – yes, no, and WOW! Wow is the one to aim for.

Some business owners worry that the cost of logo design can be prohibitively high.

Many design companies and agencies indeed charge thousands to tens of thousands of dollars for their services. But this isn’t universally true (crowdspring’s custom logo design projects start at just $299, including all fees).

We can’t promise you that your logo will become the next Nike swoosh. But if you pay attention and learn from famous logos, you can find a design that supports and enhances, rather than undermines, your brand.

Here are the top 5 lessons businesses can learn from famous logos:

1. Simplicity is more important than intricacy

Top logo designers agree that the best logos are simple. As we previously wrote:

Simplicity is vital. A complex logo will be difficult to print and reproduce and may not fully engage your audience. Take a moment and think about brands that are successful and/or famous. Most likely, you’ve thought of companies like Apple, Volkswagen, Target, McDonald’s, etc. What do they all have in common? They all have logos that are simple and easily recognized when printed by themselves, and when printed in solid black and white.

This idea of simplicity is well-grounded in the KISS (keep it simple stupid) framework. Instead of spending hours adding details and nuances to a logo, the best logo designers find ways to take away from the logo and simplify the design. French writer Antoine de Saint-Exupery does a great job summarizing this in one sentence:

A brand that does simplicity extremely well is Target. 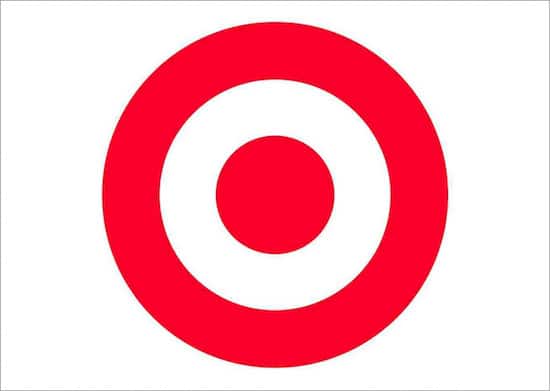 The beauty of the Target logo is that there is nothing complicated about it. It’s just two red circles usually printed on a white background. The circles take the form of a bullseye, which connects the logo to the name “Target,” but the circles don’t actually illustrate a true bullseye with all the rings and numbers. Target took an existing object that connected to its name and simplified it.

In fact, Target’s logo is so simple that it’s easy for a child to draw, and importantly, to recognize.

But the creation of the Target logo took a lot of thought. Target’s executives took the time to think about their brand messaging and what they wanted the logo to reinforce. In the end, simplicity won, according to chief creative officer Todd Waterbury:

The enduring strength of Target’s logo lies in its utter clarity. It is a design that is viewed equally from every side: from the front, the back, from the left and the right. The bull’s-eye is a symbol that is immediately, simultaneously seen and understood, one in the same, as precisely what it is.

If your company uses a logo that solely relies on color, your logo will lose its effect in black and white.

Similarly, if your company intends to only use your logo in a specific way (such as on a website or business cards), then size may not matter much. But if you’re like most companies, you’ll need a flexible logo that can be placed on multiple products, presentations, graphics, and websites.

Branding versatility is important because it helps you reproduce your logo in a wide variety of ways.

The most famous logos follow these guidelines and make sure that they don’t get lost when changing size or background. Overall, when designing a versatile logo, you’re really designing a flexible logo.

One of our favorite examples of a flexible, versatile logo is Under Armour.

While the logo is usually presented in variations of black and white, the logo also appears on apparel in different shades of greens, blues, reds, and more.

It appears on everything from socks to sweatshirts, to giant billboards. Each time, you can still recognize that it’s the same logo.

The Under Armor logo’s meaning doesn’t come from its color or size but rather from its unique shape. 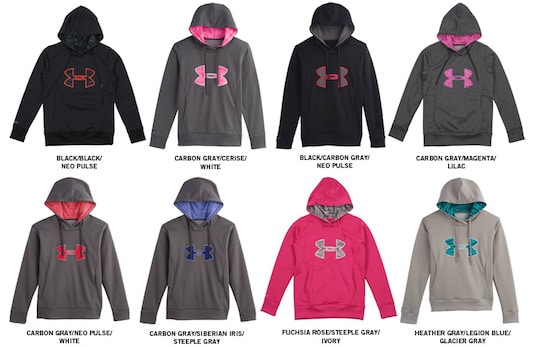 Instead, Under Armour can choose to experiment with other aspects of their design and still have a recognizable, famous logo.

This is because smart design uses elements like shape, color combinations, and sometimes negative space to achieve a beautiful and interesting design.

Smart design is becoming increasingly important in a crowded marketplace. That’s because clever logos are easier to remember:

This style of logo designing has emerged as a breakout trend in 2017, not only because these logos are clever, but because they have a high recall value. These logos, with their immense visual impact, cement your brand in a consumer’s memory, making it easier for them to remember you later on.

We’ve written about smart design in many famous logos, including the Goodwill logo, the Tobblerone logo, the Big Ten Conference logo, the Fort Worth Zoo logo, and the FedEx logo.

In some of the world’s most famous logos, the use of negative space has helped reinforce company messaging and logo recall and made for some great PR.

FedEx’s logo is a great example.

Another great example of this is the World Wildlife Fund logo, which uses negative space to create the panda’s face and torso area. The NGO operates in over 90 countries/territories around the world, supporting thousands of environmental projects. Because most of their funding comes from donations, empathy was an important value to echo in their logo design.

The initial logo was based on a giant panda at the London Zoo. The logo later evolved into a simplified, smarter designed panda, as you can see below. 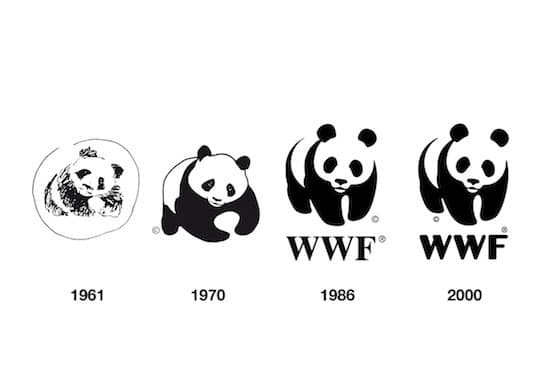 The original logo was good – it communicated an endangered animal well-liked by many, and did its job of generating empathy. But it was a little too busy and was just a drawing of a panda.

When the logo evolved to embrace negative space, it became a purposeful design and drew attention from design experts everywhere, which gave WWF even more exposure.

It’s not enough for logos to be versatile and smartly designed.

The best logos are timeless.

With little to no tweaking, many famous logos have been able to or will be able to stand the test of time and last for decades.

Disney is a fantastic example of timelessness. The logo was designed many years ago, and while many companies designed around the same time have since redesigned their logo, Disney’s has stayed put. This is good for several reasons: people didn’t have to switch their logo-brand associations, Disney hasn’t had to spend millions of dollars rebranding, and their logo is still popular and easily recognizable. 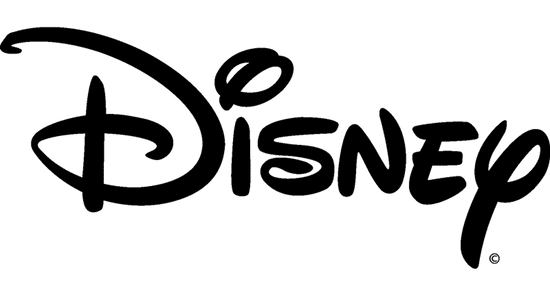 The secret to the timelessness of Disney’s logo is that they designed a logo that fit exactly what they do. It focuses on Disney’s theme of fantasy through the swirly font and stays simple in its coloring. Disney didn’t use a trendy font or color of the time but rather created its own and combined it with a classic neutral (black).

5. Color is a game-changer

Many famous logos are well-known because they created iconic color combinations or unique shapes.

For example, what’s a famous restaurant logo that uses red and yellow?

You guessed it; it’s McDonald’s. 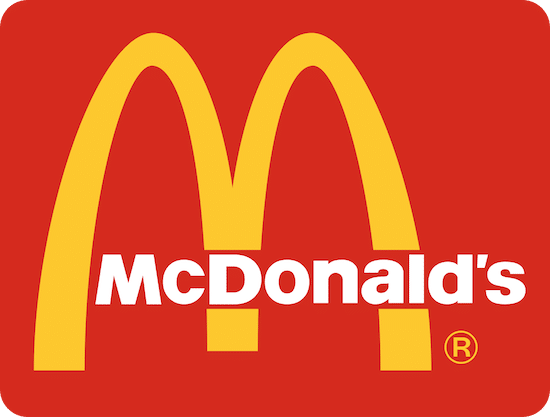 Since color plays a huge role in logo design, making a statement about your company’s color choices through a logo is a powerful design choice:

Brands and colors are indistinguishably linked – think Golden Arches, Amex Black Card, Tiffany Blue or breast cancer’s Pink Ribbon. After all, colors create a vibrant visual experience. They make things more attractive, affect our mood and can even subconsciously shape action. As a result, brands put a lot of thought into the colors they use.

As we wrote previously:

A brand’s logo is its principal design element, acting as a visual representation of the company and its values. There are plenty of things that go into a well-designed logo (10, to be more specific), but one of the most important of these is color. It may seem like an artistic decision, but the primary color you choose for your design actually has a serious psychological impact on how people perceive it.

In a widely-cited study called “The Impact of Color on Marketing,” research found that people make a subconscious judgment about products within the first 90 seconds of seeing it. The majority of these people evaluate these products on color alone: almost 85% of consumers cite color as the main reason they buy a certain product, and 80% of people believe color increases brand recognition.

So while maybe your favorite color is grass green, it’s good to know how it may affect your customers before you choose it as the main color of your logo.

McDonald’s keeps this in mind with the red and yellow colors in their logo. As primary colors, red and yellow tend to stand out from other colors we see in our day-to-day lives. They’re strong, powerful, and bold – just like the brand. It doesn’t hurt that red and yellow are common colors that cause people to become hungry.

But unlike its fast-food competitors that may also use red and yellow, McDonald’s capitalizes on its use of color by dominating the color combination. It does this by making color the focus of the logo. Sure, the golden arches of the M are highly recognizable, but it’s the color combination that can stand alone and make people think of McDonald’s.

With these 5 important lessons, you can be well on your way to collaborating on the next great logo.

You may not have the marketing budget of Nike, Apple, or McDonald’s. But you can start by making sure that your logo design contains the elements that have made those brands famous.