When it comes to crowdsourcing design needs, the projects that come to mind are pretty specific to branding. There’s good reason for that. Turning to the crowd can provide you with more innovative logo designs, engaging web designs, and creative packaging designs by bringing together a diverse set of creative perspectives for your perusal. That just makes sense.

But there’s another avenue of design that does well when sourced to the crowd that can have significant impacts outside of profit margins: socially influential design. From politics to public policy to culture wars, design has been front and center in the fight to sway public opinion.

If you’ve been paying attention to American politics in the past week or so, you know just how important logo design can be. But frankly, design has historically been incredibly influential in shaping the tone and perception of American presidential campaigns. One of the most notable examples can be found in the President Obama’s 2008 campaign.

Obama’s logo was widely heralded as one of the most unique political logo designs in U.S. history. Though incorporating traditional patriotic coloring, it abandoned traditional block logo construction, opting for smooth lines, gradient incorporation, and ample white space. The result was a very modern, clean look that aligned with his campaign’s tone, set him apart from his opponent, and set the standard for future logo designs.

But it wasn’t just the distinctive aesthetic that set the logo apart. Some contend that there were significant strategic psychological factors in play, as well. In a long and detailed (though worthy) breakdown, George Washington Professor of Art Therapy Carol Cox explained that the imagery drew considerably from culturally universal mandalas.  The specific placement of color and lines mean something unique in the context of seminal art therapy scholar Joan Kellogg. She wrote:

The Obama logo is a clear stage 6 in Kellogg’s model. Stage 6, symbolized by a circle that has been split into two halves, is an archetypal state of consciousness that has to do with the beginning of the hero’s journey. It is a time when tension is felt between two opposing forces; the idea behind this is to confront opposites, to do battle with the shadow forces, and to strive for something better. The colors that are frequently seen in the depiction of stage 6 are red and blue.

The designer of the Obama logo used a very subtle perspective technique to make the bands resemble a landscape or hill that the viewer can imagine ascending.

When the viewer’s eyes reach the horizon line, there is a white mandala against a blue background reminiscent of a rising sun. This particular rendering of a stage 6 design represents the beginning of the resolution of conflict. It speaks of idealism and change and heralds the new. […] One of the designs for stage 12 is an image rising from the center of the mandala that reflects hope and transformation. Stage 12 is considered the completion of the hero’s journey. In this interpretation, Barack Obama is the hero.

I believe this logo is brilliant because it has the potential to affect us all on a deeply unconscious level to believe there is a way to solve the polarized red and blue world we are each experiencing on so many levels. There is hope on the horizon. And that hope is Obama.

You never realized that’s what was going on, did you? Most voters probably weren’t thinking about things in these terms, but it serves as an example of how innovative, intelligent design can have significant social impact.

It’s not just elections that are impacted by the power of design though. Public policy concerns can also be affected by effective design.

Take, for instance, the ongoing policy debates regarding climate change. Some argue that graphic designers might have the ability to turn the tide of public opinion from recognition of the problem to a demand for action. Ellen McMahon writes for the Pacific Standard:

The U.S. public needs climate change illustrated and explained in all of the ways we know how. Though 67 percent of Americans believe global warming is happening, a January Pew poll found that we as a nation ranked it 19th on a list of 20 priorities for Congress and the president to handle (ahead of only dealing with global trade issues). A more recent Gallup poll found that less than one-third of Americans worry about the environment — the lowest level of concern since Gallup began measuring it in 2001. Clearly, the data alone isn’t making a difference. And that’s in part because it hasn’t been communicated in a way that makes us care.

Scientists have a critical message, but now more than ever messages need to be packaged and branded. Consider that most information comes to us through various forms of communication design, from the postage stamp to the nutrition label — and how design has the power to make it meaningful. Modern life has meant replacing the “natural” with designed messages, objects, and experiences, which means that the people doing the designing play, now more than ever, a critical role.

Some designers are taking that call to action to heart. For example, Milton Glaser — the designer responsible for the I heart NY design we all know and love — started a design initiative two years ago called “It’s Not Warming, It’s Dying” to educate folks on the consequences of unchecked climate change.

Climate change isn’t the only policy issue that’s been tackled by graphic designers, nor will it be the last. Frankly, it shouldn’t be. In a world where infographics are shared at three times the rate of any other content on social media and is considered one of the most effective means for conveying information, graphic designers hold the power to significantly impact the way people understand policy positions and advocate for them.

You Say You Want a Revolution…

One of the most notable ways that graphic design can impact the world around us, though, is in terms of cultural shifts. Creative, simple, powerful representation of ideals can help spread and sharpen a rallying call. No where was this as clear as the Civil Rights Movement of the 1960’s.

As Natalie Boyd pointed out at HowDesign:

The U.S. saw its largest public demonstration, with more than 250,000 participants, during the March on Washington rally on August 28,1963. Civil Rights activists created vivid promotional designs to achieve the March on Washington’s massive turnout. These designs were featured on just about everything, from the sides of buses, to pamphlets to activists wearing the advertisements.

Martin Luther King Jr.’s “I Have a Dream” speech touched countless lives as the words fell from his lips that day. The engaging speech rippled throughout the country, challenging perceptions, demanding equality and initiating change. Decades later, we still cherish his words.

Civil rights activists recognized the importance of tying socially conscious design into their publicity efforts. They pushed to create visual elements that aligned with their message of promoting social change and ending Jim Crow, and without these activists’ efforts in planning civil rights protests, rallies, sit-ins, and successfully marketing those events, U.S. history would have followed a different path and social equality would have been significantly delayed. 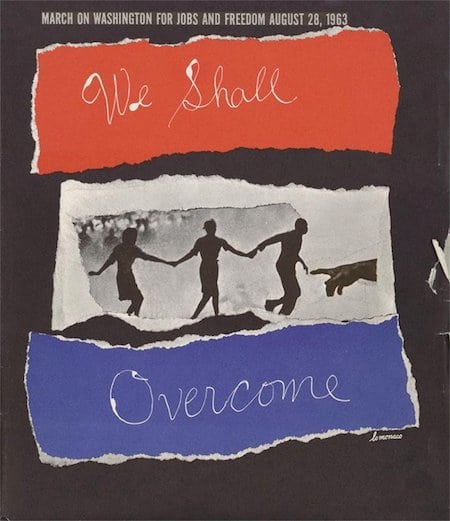 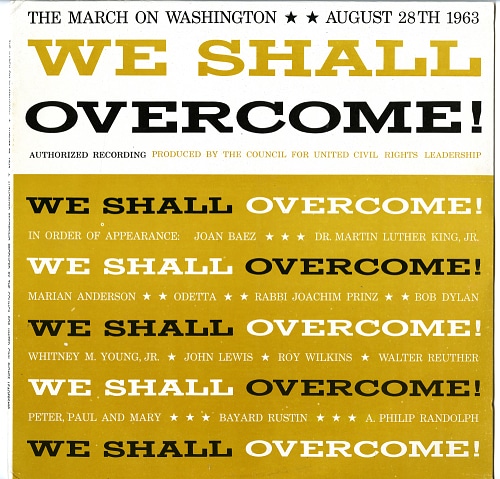 We see echoes of this effective protest strategy in today’s Black Lives Matter movement. In fact, in a FastCoDesign article providing guidance to designers hoping to contribute, the significance of designers in the movement was framed by the Black Lives Matter organization’s co-founder Alicia Garza as such:

“This iteration of the generations-old movement for black freedom is coming in the age of technology, and that’s really different from any other time in history. We can connect with each other across geographical boundaries now. A lot of the ways we use design and technology is based on needing new ways to connect with people and meet people where they’re at. We can be more grounded in the problems that they face and in their own processes in helping to design solutions to make a better world.”

How the Crowd Can Facilitate Socially Influential Design

As Garza points out, technology now plays a huge role in how design can be applied. Part of that benefit is democratization of design, allowing designers to create and contribute on their own time and terms. But another part of that benefit is the facilitation of crowdsourcing via technology, allowing organizers to tap into a large population of creatives in order to find just the right design. Whether you’re talking about trying to influence voters, policy makers, or the Average Joe, the crowd can help you figure it out.

To be clear, this isn’t us telling you how to vote or endorsing a candidate or supporting the idea of characterizing a candidate as Hitler. The point is to demonstrate how tapping into the crowd can yield images that stick with you. It’s hard to deny that these concepts do just that.

So whether you’re a non-profit hoping to reach more people, a political campaign trying to drum up greater visibility, or a concerned citizen hoping to get an idea across, don’t neglect design as an opportunity. And when you’re ready to get to work, keep the crowd in mind.