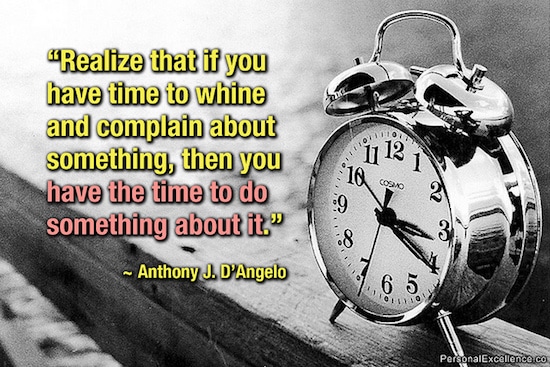 An entrepreneur’s day is busy, chaotic, and exhausting. On most days, you feel like all of the hours and effort you put into your business are worth it. But running a business – especially a startup – can often feel like riding a roller-coaster. There are days when you probably find yourself wondering whether you’re crazy trying to build something new. During those low points, many people fall into the awful trap of complaining.

Some people complain more than others. That’s not unusual – it’s human nature to complain. Read some posts on Twitter or Facebook and you’ll find tons of people complaining about many things, including incredibly trivial things. We complain despite the warnings from successful business owners and psychologists that complaining has detrimental effects on our businesses and psyches.

In a recent poll, Hilary Blinds discovered that people spend an average of 8 minutes complaining every day – amounting to five months of complaining in a lifetime. Think about how much you could accomplish in five months!

When we start to complain, we enter a vicious cycle of negativity. Suddenly, the world around us looks less promising and hopeful, and we begin to feel as though we cannot change our situation. The scary part is, in that moment, we’re right. We can’t change our situation when we are complaining. We are essentially wasting our time.

But not only are we wasting our time when we complain, we are literally changing the way we think and process information. According to Steve Parton, complaining triggers a very concerning brain function:

Every time this electrical charge is triggered, the synapses grow closer together [and] decrease the distance the electrical charge has to cross. The brain is rewiring its own circuitry, physically changing itself, to make it easier and more likely that the proper synapses will share the chemical link and thus spark together — in essence, making it easier for the thought to trigger.

Essentially, our brain automatically complains more once we create those initial connections in our synapses. This cycle acts almost like a drug, taking away our ability to think positively and to make change happen. Once we get stuck in that cycle of negativity and complaining, we get nothing done. In fact, recent scientific research from Stanford University suggests that a person exposed to 30 minutes of complaining every day physically damages their brain.

As much as some people like to let off some steam, doing so is counter-productive. Author Anthony J. D’Angelo reminds us that: “if you have time to whine and complain about something then you have the time to do something about it.”

D’Angelo couldn’t be closer to the truth. Think back to those 5 months of your lifetime potentially wasted on complaining. Now think about what you could do in five months. A lot, right?

What we need to do is always lean into the future; when the world changes around you and when it changes against you – what used to be a tailwind is now a head wind – you have to lean into that and figure out what to do because complaining isn’t a strategy.

One would think that the last part of that quote is obvious, something that most entrepreneurs would follow as they go through the difficult process of starting a business. Unfortunately, that’s not the case.

The possibilities are endless, so whether it’s tackling a website redesign, marketing project, team expansion, partnership, or whatever else rolls your way, take the time to do it. Instead of getting stuck in the idea that it’s difficult and overwhelming, acknowledge the challenge ahead of you. Reassure yourself that although it may not seem easy, you will try your best to work through the situation. Whatever you do, don’t keep talking about how difficult something is. That’s when you start to complain, and lose time and energy. Be proactive. The five months you’ll spend complaining might be the difference between your company failing and succeeding.