It’s just about lunchtime around Chicago, which means our minds are, inevitably, turning to food. Lots of food. Glorious food. And for this particular crowdSPRINGer, pizza is sounding pretty good right now.

But because we tend to think a lot about design at crowdSPRING (duh), I found my mind wandering to random design questions related to pizza. You might not think a slice of pie has much to do with design, but as my hunger-fueled research has revealed, you would be very wrong.

Design questions start at the product level: what shape the shape of the pizza be?

For the majority of us, we think of pizza as a round pie. That’s pretty common, and is partially derived from tradition. The origins of pizza can be traced back over 1000 years, when the delicious dish used flatbread as a crust. They didn’t have the luxury of choosing shapes for the bread, and round sort of became the default. Some alternatives, like Sicilian pizza, are square shaped, but it’s certainly not the norm.

And then you have a super tricky product design issue: is it better to cut the pizza into squares or triangles?

On the one hand, triangles are pretty much the default. There are good reasons for this: it’s faster to cut the pizza that way, it’s easier to handle, it’s quicker to eat, and most round foods (think cake, cheese, etc.) are cut the same way.

On the other hand, you will find people who adamantly believe that cutting a pizza into squares is the only way to go. They claim it provides greater portion control, greater access to a wider variety of topping combinations, and a good way to avoid the soggy, greasy middle of the pie.

In some cases, the type of pizza being created plays a major factor in this question. A Chicago deep dish pizza, for instance, is not going to be served in small squares. A thin crust, on the other hand, is far less likely to be sliced into triangles. It just depends.

And once you get past the product design, you’ve got packaging design to consider. Most of us are used to the traditional cardboard box we see everywhere today, but that wasn’t always the default method. As self-proclaimed pizzaholic Scott Wiener writes over at Serious Eats:

In the early 1800’s, bakers were using copper containers to transport small breads and pizzas on the street. They often employed their sons to cart these stufas (literally stoves) around the neighborhood in hope of selling the scraps for some extra change. It was kind of like Newsies, but with much less singing and dancing. Unlike today’s model of made-to-order pizza delivered hot and fresh to your door, stufa boys were hawking pre-made pies. Stufas kept the pizzas warm, as copper has high heat dissipation capabilities. They also had pointed lids with covered vents to help manage steam exhaust. Brilliant!

Jump ahead 100 years and pizza starts to catch on in New York and other industrialized American cities. Legend has it that pizzas were being sold “to-go” rolled into a cone, wrapped in paper, and loosely tied with twine at Lombardi’s (America’s first licensed pizzeria). The small breads were often sold at room temperature and reheated on factory furnaces later in the day.

As Wiener explains, he biggest innovation in pizza packaging came from Dominos founder Tom Monaghan. The now ubiquitous pizza chain was focused on delivery as a means of company growth, which meant they needed to have packaging that could withstand delivery instead of sagging and growing flimsy during the ride. After a great deal of sweat, tears, and collaboration, they launched their new corrugated cardboard box design — the same design now used by pizza places around the world.

But, of course, the packaging design extends beyond the materials and construction. Especially in the delivery world, pizza boxes have been designed to advance branding goals. Sometimes it’s just the company’s logo. Sometimes, though, folks get ambitious. For instance, in 2015, Pizza Hut released a pizza box as a marketing stunt that went well beyond delivering some hot delicious food. As Business Insider reported:

Thinking that movie nights and pizza are a natural fit, Pizza Hut created a new cardboard pizza box that turns into a working movie projector powered by your smartphone.

It’s called the Blockbuster Box, and it was designed by Ogilvy Hong Kong for a Pizza Hut marketing stunt, according to The Verge.

Once you’ve inserted the lens into the side of the pizza box, you’ll then need a smartphone to power the experience. After you place your smartphone in the center of the Blockbuster Box, the lens will magnify your smartphone’s display and project it onto the wall.

Sometimes, though, what sounds like clever design can backfire. Dominos, for instance, came under fire in 2011 when they failed to realize that what they thought was a fun play on words was an echo of some very common and very gross words about consent in sex. As XO Jane reported:

A few months back, Domino’s Pizza released its new “Artisan” line of pizzas. While the name is something of an oxymoron, the “Artisan Pizzas” were intended to be a cut above the usual Domino fare. To that end, Domino’s pledged it wouldn’t accept any substitutions — something about the pies being expertly crafted, wouldn’t want to ruin the integrity of the flavors, so on and so forth. Bottom line: If you asked for substitutions on your Artisan Pizza, Domino’s would say “no.”While that’s all fine and good, we can’t help but feel that Domino’s should have rethought the advertising campaign that accompanied the new line of pizzas.

Ahhhh, what? No means yes? As the good folks at Shakesville, which originally found this ad, put it: “There is absolutely no way that the company can reasonably argue they didn’t understand the nonconsent implications of this phrase.”While the easy thing to do is say “hey, this is just a pizza ad” — and yea, it is — that’s too simple a response. When your pizza ad looks like it was ripped from a date rape apologist’s playbook, maybe it’s time to reconsider your strategy. Another idea? Stop trying to convince people mass-produced pizza is “artisan.”

But the point of this meandering story (outside of leveraging my preoccupation with my soon-to-arrive pizza for the greater good) is to highlight that design can and does play a role in almost every aspect of our lives… including the delicious ones.

It’s also to underscore the fact that design needs, solutions, and trends are constantly evolving. Even if you’re just talking pizza, there are still efforts being made to make things better. Take, for instance, a design created by Yu Kyung Ha, Won Min Jung & Kwon Young Hee: neat pizza fingers. 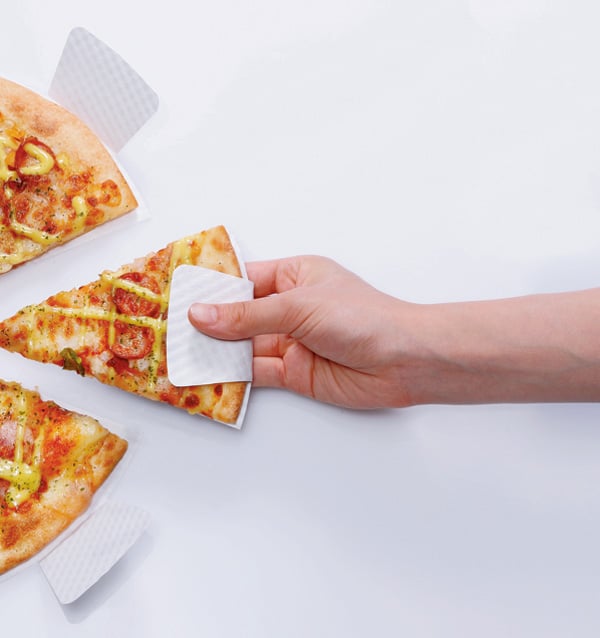 Instead of the standard single circular piece of cardboard, the pizza using this packaging design would sit on detachable pieces that can then be used to protect the hands from the grease that inevitably accompanies a great piece of pie. GENIUS, I SAY!

So keep dreaming, folks, no matter how conventional your space might be. Don’t settle for tired product design; seek out exemplary product design that will make the consumer’s experience with your product extraordinary. Don’t settle for boring packaging; find packaging design that will make a fantastic and memorable first impression. Change the world, one slice at a time.

And on that note, I bid you adieu. I’m pretty sure my pizza delivery guy just pulled up.