The About page of Carson Mag, a new bi-monthly magazine, says the following about David Carson:

Creative Director David Carson has won over 170 awards for his work in graphic design, had numerous one man exhibitions of his work worldwide, and has been called the “Art Director of the Era” by Creative Review London. USA Today called his work “visually stunning,” and claimed “it may actually get young people reading again.”

Some of you will recall that David Carson has, on many occasions, publicly voiced his view that speculative work is wrong. Here is Carson’s sanctimonious opinion from a panel debate on the subject of spec work, from the 2009 South by Southwest Interactive Festival (listen from 1:22 to 1:36):

Here’s a transcription of what Carson said:

“[Spec] work absolutely devalues the value of the profession…of individual designers…in a shocking and horrible way…cheapens the whole industry.”

We, of course, disagree. You can imagine our surprise when we saw the following on the About page of the Carson magazine (highlighting added): 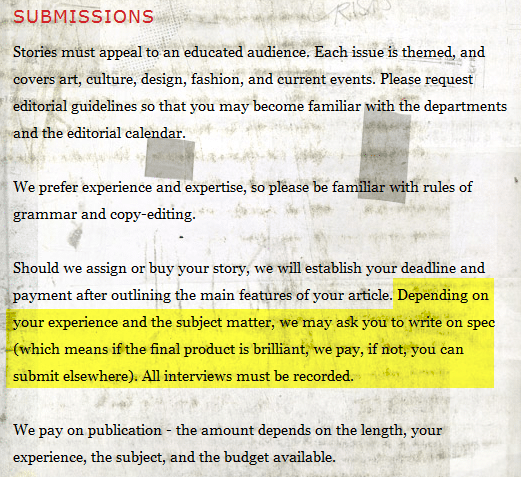 We’re happy to see David Carson evolved his views and now agrees with us.