This year’s American presidential race has been one of the most contentious in modern history. The level of polarization in the electorate is astounding, and the polls have left her citizens and international spectators alike in a semi-terrified trance of sorts, in disbelief over how close the contest actually is.

And in the middle of the mudslinging and grandstanding are some very, very uncomfortable brands.

It’s important to note that brands are not always neutral in American politics. It’s totally acceptable for an American brand to encourage voters to register or get to the nearest polling station on election day. It’s not uncommon to see brands, like Hotels.com.

And the way the political donor system works in this country, companies also have the ability to donate to candidates and causes of their choosing, and very frequently do. But for the most part, you don’t see a lot of brands carrying political water. The stewards of those brands often will, but the brand itself won’t be used to denigrate or prop up any given candidate.

But when the first female candidate of a major party is running against a former TV reality star known for his inflammatory rhetoric, all bets are off.

Last week, the Trump campaign found itself in hot water over a graphic it distributed on social media comparing the security threat of an increased refugee population on American soil to a bowl of Skittles with three poisoned candies in the mix. 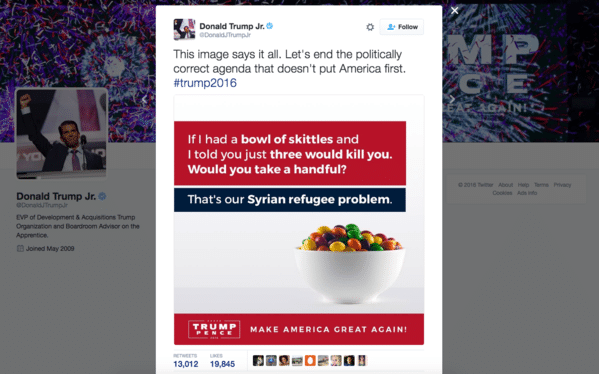 Folks were not pleased, to say the least.

Based on actual odds of getting killed by terrorist refugee, you’d need 10.8 billion skittles to find 3 killers https://t.co/Ba5HNFhvM1

If I told you I had a basket of deplorables and just three would kill you… pic.twitter.com/8Nez6qscuz

“Can I elect the bowl of Skittles president instead of your dad?”

But as the campaign doubled down on the analogy, Skittles fired back, putting distance between itself and the candidate’s statements.

A rep for @Skittles gives me their response to @DonaldJTrumpJr pic.twitter.com/OmkJQkIqug

Perhaps unsurprisingly, the offending image has since been removed by the Trump team.

Then came Monday’s debate. As Clinton and Trump squared off between their respective podiums, one of Trump’s big talking points related to trade and the loss of jobs as companies moved overseas, saying:

So Ford is leaving. You see that, their small car division leaving. Thousands of jobs leaving Michigan, leaving Ohio. They’re all leaving. And we can’t allow it to happen anymore.

Ford was having none of it, tweeting out:

Ford has more hourly employees and produces more vehicles in the U.S. than any other automaker. pic.twitter.com/k15cqknsvX

Inquiring Twitter minds wanted to know about the plants referenced by Trump, and Ford confirmed that while it is opening a plant in Mexico that will take over production duties currently carried out in a Michigan plant, the Michigan plant will remain operational with zero job losses, just focusing on other products. They’re expanding, not moving away altogether. This was backed up by tweets from the UAW.

The message was clear: Ford wants their brand far, far away from Trump’s politicking. Which says something, given that Ford vehicles take up 4 of the top 10 models driven by Republicans.

But just because some brands are distancing themselves from Trump doesn’t mean they’re endorsing Clinton outright. If anything, they just want away from the fray. The notable exception Monday night was another car company: Honda.

It didn’t take long for the tweet to get taken down, with most speculating that — as was the case with the now infamous KitchenAid Obama tweet — it was a case where a social media manager accidentally tweeted out something meant for their personal account. Honda confirmed as much yesterday.

A personal comment was inadvertently tweeted about the debate on @Honda. It’s Honda’s policy not to endorse any candidates. We apologize.

In other words, brands aren’t really breaking with tradition altogether. If anything, it seems as though they’re working hard to maintain that tradition due to the unique dynamic in today’s race. Trump has been known to repeat things that have been proven factually incorrect despite debunking, so it’s possible that brands are being more direct to ensure they don’t get caught up in the resulting confusion. That’s not necessarily anti-Trump so much as anti-drama, and that’s about as traditional as it gets.

But hey — there’s still 40 days until election day, and given the way this cycle has played out so far, that’s plenty of time for things to change.