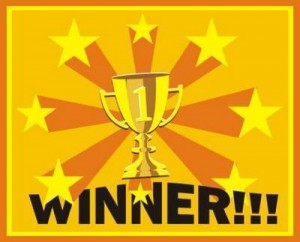 What a difference a year makes!  We’ve had a pretty amazing year here at crowdSPRING – we’ve seen some amazing company’s making the switch to the crowdsourcing platform, we’ve paid out $2.5 million in awards to our more than 40,000 creatives and we’ve expanded our office personnel.  We’re feeling pretty darn loved and lucky and because of that, we want to share the love! We really appreciate everyone and everything you guys are doing and have done and to show our appreciation we are pleased to announce the inauguration of our annual Springy Awards! These awards will take place at the end of each year and include four different categories for you to win:

Most Winningest Designer of the Year – The word may be made up but it’s the only word that’s able to capture how much you do for us as designers. crowdSPRING will award the designer who won the most projects this year.

The Community Award – This is awarded to the designer who contributes the most to our crowdSPRING community, whether it’s through the blog, our forum or feedback on projects themselves – we appreciate your mouthiness.

And here’s where you guys come in – the following are crowdSPRING’s People’s Choice Awards:

crowdSPRING Designers:
It’s your turn to speak up and nominate the buyer you think deserves the Buyer of the Year award, which is given to the buyer who you love working with the most.

If you are a creative or a buyer in the crowdSPRING community or even just a friend of one, we would love to hear your nominations to find the best buyers and creatives that deserve an award this year (don’t be afraid to nominate yourself! We’ll never tell.)

Please submit your nominations no later than November 20, 2009 to springy@crowdspring.com.

Simply email us the crowdSPRING username of your nominee and a quick reason why you believe they should win the award. Put the award you’re nominating for in the subject line of the email.

The Winners will get a special crowdSPRING winners package complete with award!