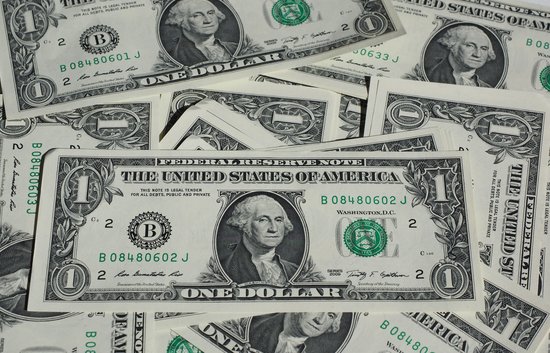 Are you an eager entrepreneur, ready to conquer the business world with your brilliant idea but unsure how to get funding?

If so, you’re not alone. 68% of potential startup founders worry about funding their business ideas.

Crowdfunding, one of the fastest-growing funding resources for small businesses in America, may be worth your consideration.

Reports have shown a consistent increase in crowdfunded investments since the great recession in 2008. In a recent study on the Crowdfunding Industry, World Bank predicted that the crowdfunding market could increase to between $90 and $96 billion, which is approximately 1.8 times the size of the global venture capital industry today.

But, Kickstarter and Indiegogo aren’t the “Field of Dreams.” Simply building a crowdfunding campaign isn’t enough. With so many businesses seeking to capitalize on the crowdfunding trend, there’s more competition than ever. In order to succeed you’ve got to capture the attention and imagination of the crowd.

Gabriel Bestard-Ribas, who raised over $300,00 during the Indiegogo campaign for his Goji Smart Lock agrees:

Why do people support crowdfunding? Because they are drawn to a vision. One they want to engage with.

So how can you follow in his footsteps and set your project apart from the masses? A good idea is vital- but it’s also not enough to stand out in the rapidly growing and competitive world of crowdfunding. Good campaign design is a must if you want your project to succeed.

Here are essential design tips to help you craft a crowdfunding campaign page that will ensure your project captures the attention it needs to succeed.

Sell Your Pitch with Video

Your crowdfunding campaign is your opportunity to show the world how amazing your product or service is. Your goal should be to inspire people to become a part of your dream- by helping to fund it. Bestard-Ribas reflects,

Many people think of their campaign as just selling a product. But you’re really launching your company to the world.

So, we can’t understate the importance of making a good first impression. The key to that impression? A pitch video featured prominently at the top of your campaign page. Crowdfund Insider reports that campaigns with pitch videos raise four times as much money as campaigns without video.

Stephen Key, co-founder of InventRight and Inc. Magazine contributor explains why he believes videos are such successful selling tools:

Video is powerful. It resonates with people instantaneously. We love to watch it. If a picture is capable of expressing a thousand words, how much more can a video communicate?

And, if you’re going to lead with a video pitch, you’ll want to make sure it’s a good one.

But, don’t panic- you don’t need fancy special effects or a compelling on-screen romance to create a great video pitch. Forbes contributor Amadou Diallo claims that you can shoot the video on your phone if you need to- as long as you put significant time and thought into planning the video first. 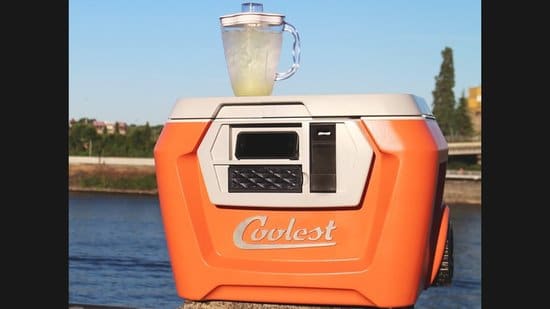 The video for the incredibly successful Coolest campaign on Kickstarter is a great example of a pitch video. Narrated by the product’s creator, Ryan Grepper, the Coolest video demonstrates all of the many tasks his Coolest cooler can perform. These include blending iced beverages, charging your smartphone, and playing music, among others.

The video is short and sweet, clocking in at just under 3 and a half minutes. And Grepper manages to end with a call to action that reminds you why you’re there in the first place- to back an awesome product- without being too heavy-handed.

Here are a few action items you can borrow from the Coolest video- and you can execute each and every one of these whether you’re shooting with an expensive camera rig or on your iPhone. 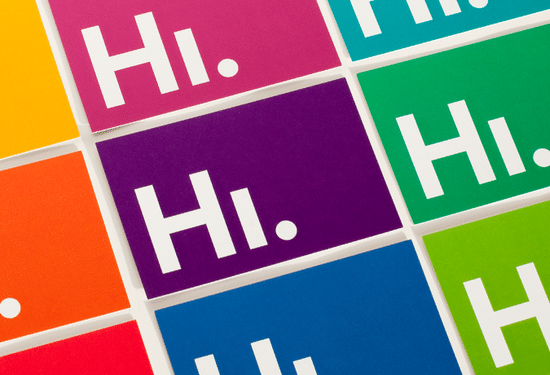 Image courtesy of Every Interaction

Your campaign page is your new venture’s face to the world. It needs to tell your audience who you are, what your product is, and that you’ve got your ducks in enough of a row to be trusted. One way to communicate all of these things is through cohesive branding design on your campaign page.

The experts at Enventys Partners point out,

As with any business venture, you’ll need brand assets – logos, renderings, photos and more. This needs to come first.

These branding essentials should appear throughout your campaign page. A consistent visual message makes a lasting impression on your potential backers and provides credibility for your growing business.

Once you have these basic assets in place it’s time to think about the specific design elements you’ll need for your campaign page. Headers and other campaign-specific graphics outlining product details, stretch goals, and rewards and incentives will be needed to tell your story and sell your project persuasively.

The Kickstarter campaign for the second print book of the webcomic Strong Female Protagonist provides an excellent example of a unique and cohesive campaign design. All of the graphics for the campaign are drawn in the same style as the comic itself. The headers, rewards, and stretch goals graphics all share a similar color scheme with the cover of the book itself. Every visual included on their campaign page looks like it belongs with the rest. 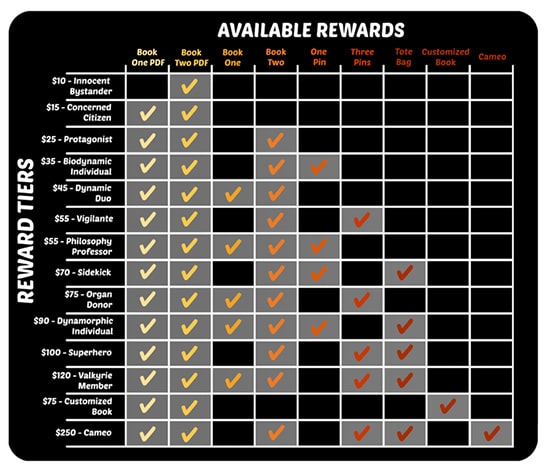 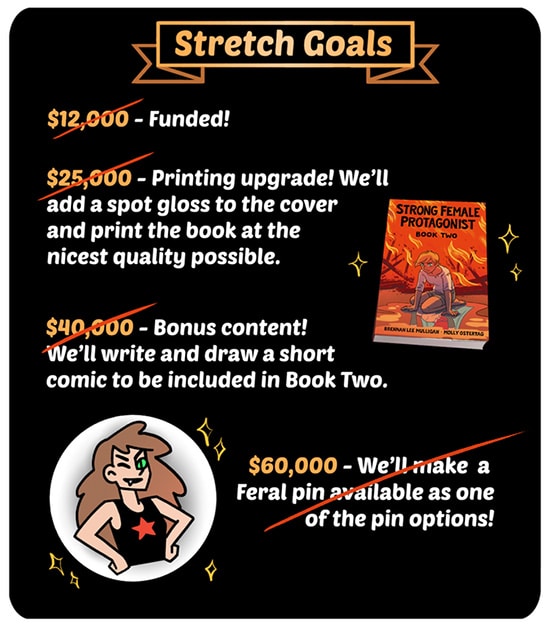 What can you learn from the Strong Female Protagonist campaign?

Feature your Product in the Best Possible Light 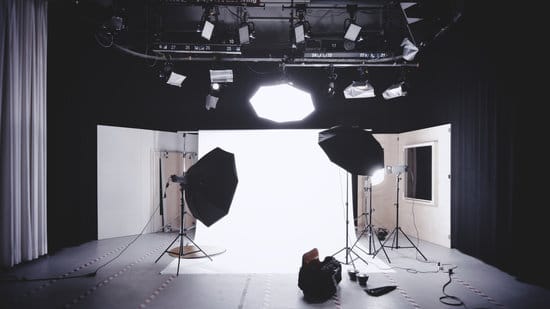 Showing off your product to its best advantage is a no-brainer. But, accomplishing that goal involves (at a minimum) two separate steps: providing professional-looking images of your product and calling out your product’s strongest features and design details.

Since the advent of online shopping, product photos have become an invaluable selling tool. Traditional stores allow a consumer to not only see but also to pick-up and handle the products they consider purchasing. Online shopping doesn’t offer that luxury.

Potential buyers (or in the case of crowdfunding, backers) rely on photos or renderings alone to determine what exactly their money is going to get them. Images convey what the items looks like, how it works, and the potential quality of the item. They also help a backer to see how the product might relate to their life.

So, to turn browsers on your ecommerce website into buyers, you need to show potential customers your products in their best light, including how they can be used or worn. This helps to put the images into a lifestyle frame of mind for customers, who can then identify with the usage of the item, or move on to another brand.

Phazon, a manufacturer of wireless earbuds, was on top of their product imagery game when they earned 1816% of their original Indiegogo fundraising goal. 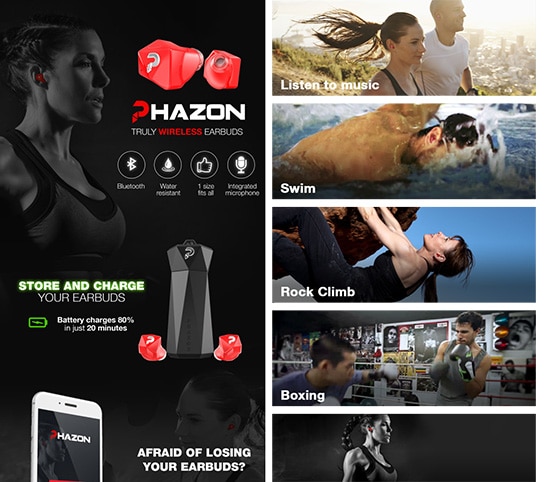 After looking at this wealth of visual information I almost feel as though I’ve held and worn Phazon’s earbuds myself. And I want a pair! So what did they get right and how can you do it too?

If you’d like to learn more about how to set up your own product photography rig on the cheap, check out these great articles from Shopify’s Mark Macdonald and Tyler Kapper of Big Commerce. Once you’ve got your product images ready to go, it’s time to start thinking about your product feature graphics.

Your crowdfunding campaign needs to be optimized for the average internet audience- which a 2015 Microsoft report revealed has shortened by one-third since the turn of the millennium. So, it’s important to provide a graphic (or graphics) that succinctly point out all of your product’s most valuable features.

UPRIGHT GO’s Indiegogo campaign did an excellent job of this. Their product graphics are clear and easy to grasp. This was particularly important for their product- a wearable posture tracker that vibrates if you start to slouch- as the tracker itself looks rather nondescript.

Despite the UPRIGHT GO’s unassuming appearance, the campaign raised over $1.1M, a whopping 4473% of their original funding goal. Perhaps their excellent product feature graphics had something to do with their success? 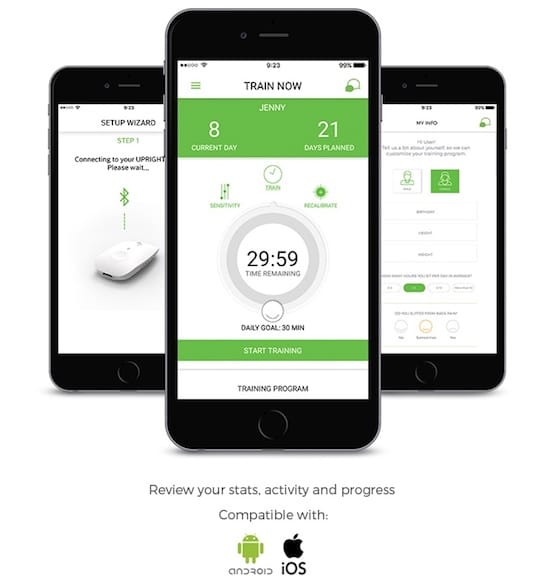 UPRIGHT GO included a graphic showing the physical value the tracker would provide to their wearers, as well as a graphic calling out the convenience features the tracker provides. 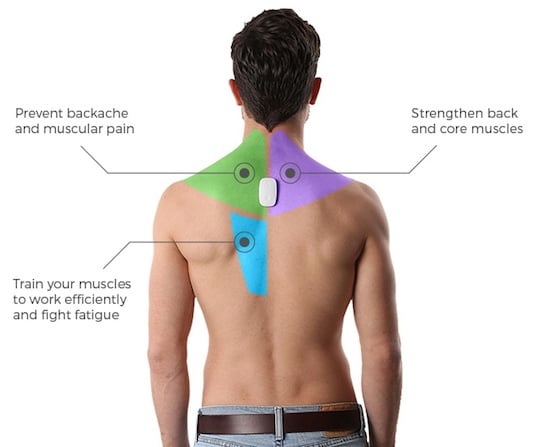 They also included an easy-to-follow graphic showing how the tracker is worn and a graphic with screenshots of the tracker’s accompanying app. 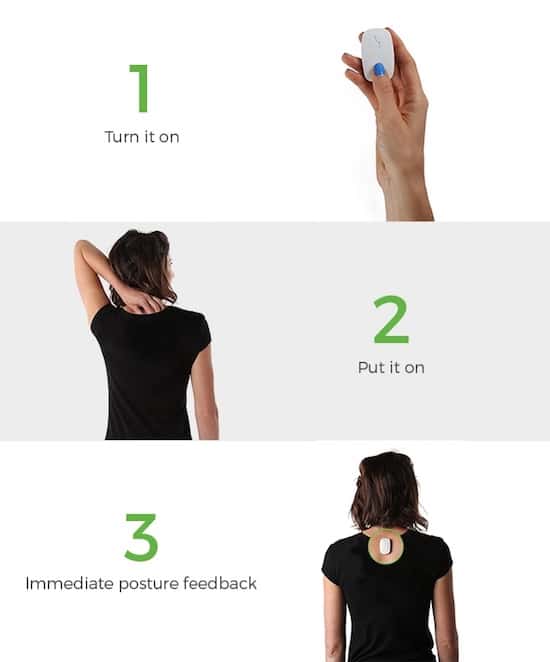 Here’s what you can learn from UPRIGHT GO… 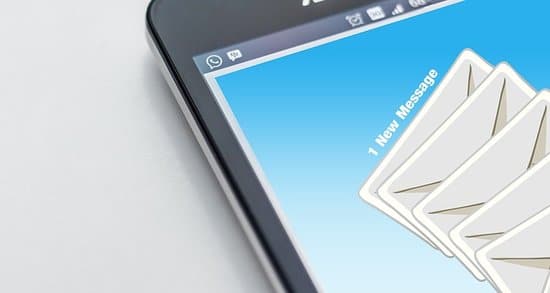 Regular updates to your campaign page, with details about stretch goals and new backer rewards, keep your current backers interested and encourage new backers to contribute. JD Alois of Crowdfund Insider recommends that you update your campaign page “all of the time” to keep interest high.  And these elements all need to be thought out as part of your overall design as well.

Kickstarter recommends updating whenever your campaign reaches a financial milestone– like reaching the first quarter, third and half of your goal; or a community milestone such as reaching your first 25, 50 and 100 backers. They also suggest announcing any changes you make to your campaign.

These changes could include new stretch goals (new financial goals along with accompanying promises of expanded features) and new rewards. Tiered rewards are a key component to a crowdfunding campaign; incentivizing backers to make donations of increasing amounts in exchange for exclusive rewards. Updated graphics outlining the details of these goals and rewards are a must.

Updates should also be shared by email and social media. Tech Crunch reports that most contributions to Indiegogo campaigns come from email campaigns, followed by social media (Facebook in second place and Twitter in third).

Constant communication shows potential backers that the people behind the campaign are working hard and care about what they’re doing. In turn, this builds confidence and drives strong backer donations.

So make sure these vital updates are shown the same care as the rest of your campaign page. Professional email templates and graphics will go a long way toward building trust. The Exploding Kittens card game Kickstarter campaign did an excellent job of tying their updates in with the rest of their design. 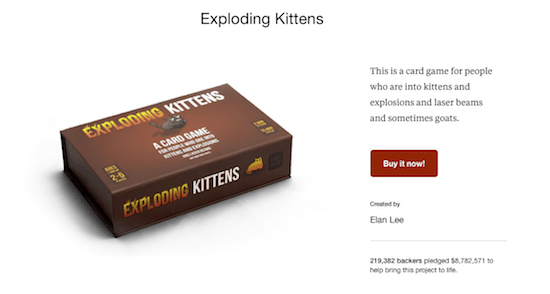 They included graphics (drawn in the style of the card game itself) showing their stretch goals and rewards. As each goal was met, they updated their graphics by crossing out the information that was no longer applicable and clearly directing you to the new relevant information. The result is playful and easy to follow. You can see the evolution of their campaign in action. 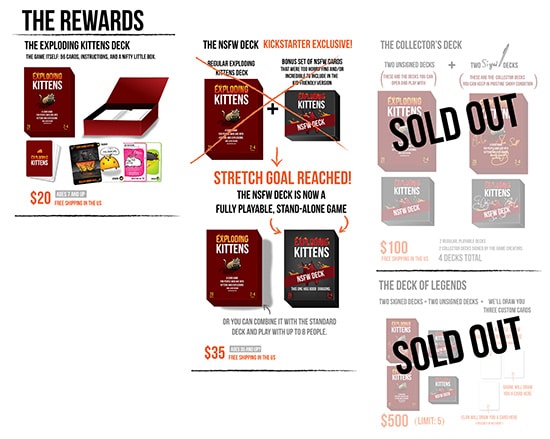 A successful crowdfunding campaign doesn’t just take a great idea, it also takes great execution. If you follow the tips we’ve outlined above, you’ll be on your way to your own professionally designed crowdfunding campaign that will give your business the kickstart it needs. Now you just need a million dollar idea.