If you run a business – even a small one – you are regularly communicating with the public.

Most of the time, the communications are positive and simple.

But there are times when pretty much every business owner runs into a communications problem.

Sometimes, an angry customer decides to take their anger online and shares their frustrations on social networks. At other times, a negative story in the newspaper or on television might paint you or your business in a bad light.

PR is the way organizations, companies, and individuals communicate with the public and media. Good PR can bring your brand adoration, esteem, and loyalty. Smart PR can take a potential trainwreck of a situation and turn it into something advantageous for your company.

It can quickly impact your revenues or the trust your customers have in your brand.

Some of you may recall the negative stories about the EpiPen after Mylan, the company that manufactured the EpiPen, substantially increased the price by 400 percent. The public outcry and negative publicity damaged Mylan in many ways. Mylan tried to recover by offering a generic product, but the damage was already done. The government started an anti-trust investigation, Mylan was sued, the stock fell by more than 70%, and the company had to lay off thousands of employees.

Even large, well-established companies make many mistakes when faced with a publicity crisis.

Many of you probably recall when United Airlines got raked over the Internet coals for dragging a passenger off an overbooked plane after he refused to give up his seat. United dug their pit even deeper with series of poorly thought-out apologies.

Apologizing for “re-accommodating” customers by physically dragging them off the plane sounds ridiculous, but this was just the start of a long and very poorly handled PR disaster. In an email to staff, CEO Oscar Munoz refused to take responsibility for what happened, saying that the passenger was “disruptive and belligerent” and that “employees followed established procedures for dealing with situations like this.”

This negative, poorly thought-out response to a PR crisis violated every guide to achieving customer satisfaction after complaints are voiced. Engaging in such behavior is sure to result in a poor experience for your consumers and will likely result in the loss of their loyalty.

To be sure that your business is ready to deal with a PR crisis, make sure you understand what you’ll need to do if you face one.

Here are five tips that can help you deal with angry customers or negative publicity.

Fast-track your business growth with these essential business templates, checklists, speadsheets, and guides.

We just emailed the resources to you.

1. Preparation is the father of inspiration

But if you’re already operating a business, the odds are high that you will face angry customers and negative publicity.

What should you do when that happens?

Be proactive! Get your team together for an exhaustive brainstorming session, and come up with every crisis that could occur in your company.

There are many benefits to being ready before a PR crisis:

Creating a crisis response plan that works for your organization and includes operational and communications strategies is the best way to stay ahead of problems.

Deal with problems gracefully and effectively, and you will help ensure the long-term success of your business.

2. How your respond matters

First and foremost, accept that you can’t please ‘em all, and some people want to kick and scream.

Don’t feed the trolls by jumping into a storm without having a plan first.

Have situational strategies already in place, so you are well prepared in the event trouble strikes. If something takes you by surprise, however, be thoughtful in your response.

You may not totally understand the details of every difficult situation your company runs into. Take the time to do your homework: Talk to your employees, and garner all of the information required to know precisely what happened.

Be sure that each complaint is being taken seriously. Customers should feel listened to and like a real person is following up on their concerns. Don’t underestimate the value of listening to customers and prospective customers.

If you communicate a plan of action and demonstrate that you are working toward a solution, the chances are good that tempers will be, well, tempered.

This aggravating non-response projects a terrible impression, leading the aggrieved to feel that your brand doesn’t care.

The best way to lose company loyalty is by convincing your customers that you don’t value their experiences.

Want to make things even better? Go out of your way to make their experience unexpectedly special.

Pick up the phone and talk to your customer one on one. Send a personal email instead of a prewritten form. Want to really wow them? Compose a handwritten letter. Make it clear that you’re not looking to bury your head in the sand, nor are you trying to guild the lily.

Want to really wow them? Compose a handwritten letter. Make it clear that you’re not looking to bury your head in the sand, nor are you trying to guild the lily.

3. How quickly you respond matters

A key part of crisis management is communicating quickly, openly, and transparently. Samsung failed to do this in the early days when reports of exploding Samsung Note 7 phones starting pouring in and paid the literal and figurative price.

A web page warning Note 7 owners they should power down their devices and bring them in for exchange or refund were linked to from the Samsung home page with the text, “Updated Consumer Guidance for the Galaxy Note 7.”

A New York Times article on how Samsung handled the crisis too slowly and with not enough urgency put it bluntly:

“This is a phone that can literally catch fire and burn your house down with you in it,” said Dean Crutchfield, an independent brand consultant in New York. “I don’t think that’s being highlighted enough.”

Once you’ve decided you want to take action, don’t wait. Research by Convince and Convert showed that 42% of people using social media to complain about something expected a response within 60 minutes.

Corral the issue with a well-planned response, so the problem doesn’t balloon out of control. Even better, if you’ve gone through the effort to create a crisis response plan, you may be able to anticipate issues and deal with them before they blow up.

4. Use a little humor, if appropriate

Although when done improperly, this can backfire, sometimes a well-placed joke or bit of humor can turn a potential PR disaster into an opportunity. Not taking yourself too seriously can help make your brand seem more human and fallible.

The American Red Cross isn’t the first place you’d expect to find humor used to recover from a mistake. Yet this is exactly what happened when a staff member accidentally posted a personal tweet to the Red Cross’s official Twitter account. 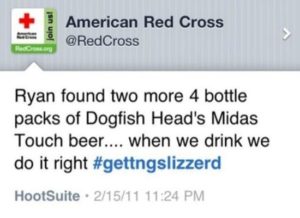 Instead of rushing in with a series of choreographed tweets, the Red Cross tweeted a quick response that made light of the situation in an honest and rather endearing way.

We've deleted the rogue tweet but rest assured the Red Cross is sober and we've confiscated the keys.

Dogfish Head Brewery, the company mentioned in the “rogue tweet,” also took excellent advantage of the errant twittering. They showed that their hearts were in the right place by encouraging their followers to donate to the Red Cross.

Or make a donation! RT @Michael_Hayek: In honor of all the great work the @redcross does I'm tagging any beer tweet 2day w #gettngslizzerd

Humor can be a tricky thing to do well, but it is also a powerful way to humanize your brand in a way that feels honest and open.

Saying “we’re sorry” is one of the many ways companies can handle touchy PR crises. Apologies may seem straightforward, but like anything deceptively easy, there’s a right and a wrong way.

Dr. Beth Polin, the author of The Art of the Apology, outlines six components of an effective apology:

A well-crafted apology can go a long way to restoring trust. “Apologies are surprisingly effective if they’re given correctly,” according to Polin.

Polin recommends you do these four things when you apologize:

Make your apology meaningful. Let the injured party know you’re listening. Clearly explain what changes you’ll make to avoid hurting your customers in the future. Assure people that you are invested in genuine improvement and demonstrate that you are working to rebuild broken trust.

Receiving negative press on social media or otherwise encountering a tricky PR situation isn’t as scary as you may think. By being prepared with a level head and appropriate crisis response strategies, you can turn bad press into a winning situation.

The reality is that no business is perfect, and no business survives and succeeds without criticism.

But when you face a crisis, look for ways to turn that crisis into an opportunity to improve your business and show your customers just how much you value them.