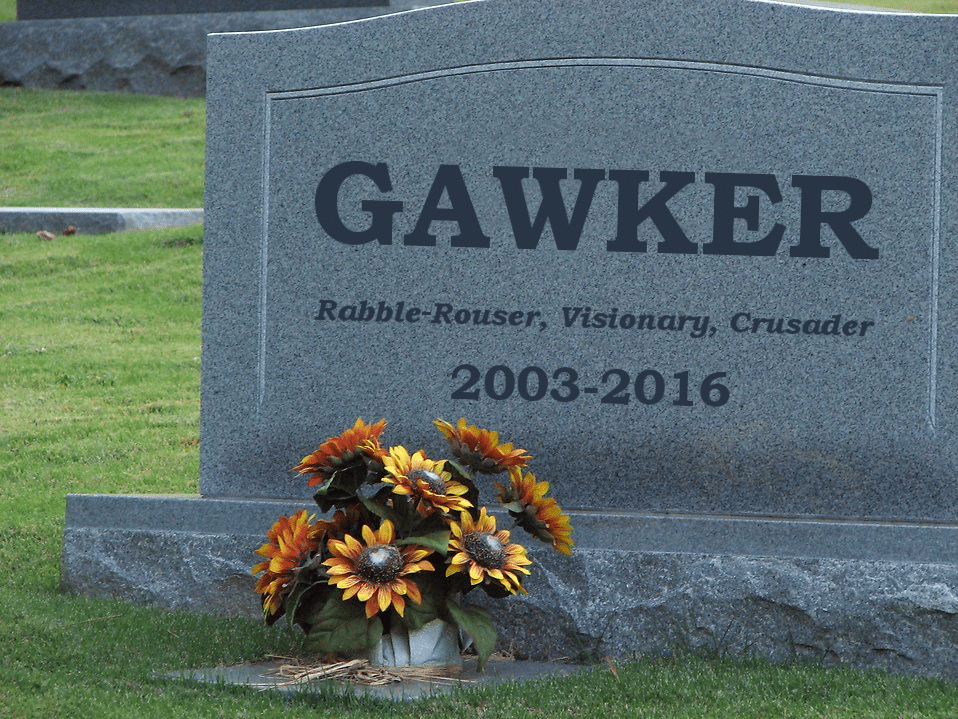 After losing a lawsuit against Hulk Hogan over the publication of a sex tape in which he featured, Gawker Media was bought up by Univision. Though many of the sites under their umbrella, like Jezebel and Deadspin, will live on, the always controversial Gawker.com is being shuttered.

There’s good reason for this. The Hogan lawsuit is just one of many being litigated at this moment, and after a number of posts that drew public ire, the prevailing sentiment was that the name had become toxic.

I admit I’ve had conflicting feelings on this. I wouldn’t count myself among Gawker’s fans. The outing of unknown mid-level execs doesn’t seem to serve the public interest in the way we hope the Fourth Estate would. But I’m also disturbed by the idea that a man with a vendetta and deep pockets could shut down an entire media organization. Like I said, conflicting feelings.

Many more have written many, many think pieces on the death of Gawker, and the role that Gawker played in the evolution of digital media. As Farhad Manjoo put it in the New York Times:

Created in 2002 after the dot-com bubble, Gawker was far from the first online news site; it wasn’t the first blog or the first network of blogs, either. But in many ways, Gawker Media — which included Gizmodo, Deadspin, Jezebel, Lifehacker and several other sites in addition to Gawker.com — was the first real digital media company. It was the first publisher that understood the pace, culture and possibilities of online news. And it used that understanding to unleash a set of technical, business and journalistic innovations on the news industry that have altered the way we produce, consume and react to media today.

The most important innovation Gawker brought to news was its sense that the internet allowed it to do anything. It was one of the first web publications to understand that the message was the medium — that the internet wasn’t just a new way to distribute words, but that it also offered the potential to create a completely new kind of publication, one that had no analogue in the legacy era of print.

There’s a lot of truth in those words, but as I read them, it struck me that Gawker didn’t just change the way we produce and consume news. It also paved the way for bolder, more dynamic marketing.

Gawker showed that a brash, unfiltered voice had an audience. It wasn’t the first site, by any stretch of the imagination, to do so, but it did so on a massive scale. It was the proof positive that gave so many other media sites the gumption to ditch AP perfect formatting for a more authentic voice.

Gawker also blew old school PR standards to smithereens. For years, securing PR for your company meant hiring someone (or a lot of someones) to work networks and grease palms, and even then there were no guarantees. The rise of groups like PRWeb threw a wrench in the gears of that system, allowing anyone to send a press release to everyone on any topic. Suddenly media folks were drowning in press releases of little relevance.

But Gawker was uninterested in playing either version of the PR game. They’d cover a new product or service or innovation or event… if it was newsworthy. You could not rub the right elbows and get your company featured. You couldn’t just spam folks with press releases and assume you’d at least get highlighted in filler. And even when they did choose to highlight your organization, there was nothing you could do to ensure the coverage was positive. In fact, they might just make fun of you instead. As other platforms adopted a similar approach, marketers had to get smart about how they allocated their PR resources, and think hard about when and how to frame a development.

More than that, Gawker ushered in an era of business accountability we hadn’t seen before. You didn’t have to tank your company or release a faulty product to garner their ire. Donations to anti-equality organizations, support of ignorant or bigoted politicians, jokes made in poor taste, lousy parental support, and more could put you on Gawker’s bad side. And other publishers followed suit as people showed that they actually cared about that sort of thing. The recent rise in conscientious consumerism was fueled by Gawkerism, which altered marketer’s calculations in terms of brand control.

And they were fast. Way faster than their traditional media counterparts. They were pushing out stories before old school journalists could finish a first draft. Eventually the bigger outlets began to catch up, and at that point, the marketing stakes were sky high. Your social media manager accidentally tweets out something from the company account that’s embarrassing to the brand? No delete button can save you from the speed of Gawkerism-inspired journalists hitting “print-screen.”

High stakes marketing wasn’t just a function of social media, thanks to Gawkerism. They also pushed marketers to think more critically about their choices and strive for excellence. A creative campaign could be cause for celebration in this world. A poorly designed logo could make you the butt of a joke. Tone-deaf ad composition could spawn a million think pieces. Your internal marketing memos? That could be a story. And that wouldn’t have happened without Gawker leading the charge.

Love ’em or hate ’em, Gawker changed the marketing game forever. They simultaneously made our job harder and more rewarding. They didn’t do it by themselves, but they certainly left their mark.

So here’s to Gawker! Pour one out for the incendiary site we all loved to hate, but owe a massive debt of gratitude.