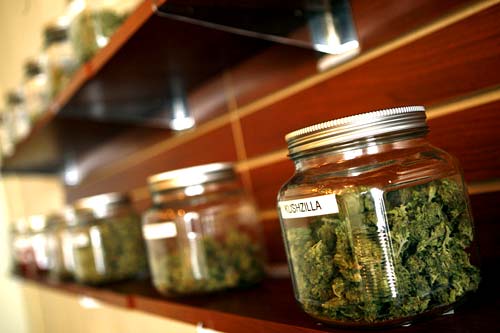 For all the stereotypes about lazy, hapless stoners out there, those peddling green in states where recreational or medical marijuana use is legal sure know how to hustle.

The size of the market for legal marijuana in the United States is projected to grow to $7.1 billion in 2016, according to a report by New Frontier and ArcView Market Research. People don’t always realize how many varied products fit in that category, aside from the dry herb that most will recognize there’s, full-spectrum hemp-derived CBD oil, edibles and all sorts of concentrates. These new products are a growing reason why the popularity of marijuana is expanding. That represents 26% growth over the previous year, driven largely by adult recreational sales of marijuana, the researchers found.

The states that have legalized weed are seeing windfalls in “green” taxes, such as the $70 million that Colorado took in during the 2014-15 fiscal year. That’s nearly twice as much revenue than the state earned from alcohol taxes. Colorado is expected to generate $135 million in cannabis taxes and licenses fees in fiscal year 2015-16, according to ArcView.

In the beginning, the brave entrepreneurs that entered the space had to exist. Demand was high, and supply was spotty in places.

With all the negative stereotypes associated with pot use, companies needed to combat bias. Differentiation took a backseat to PR, in some ways.

But as the market swelled, more and more players entered the space, legal CBD capsules and marijuana providers find themselves in a position where branding finally matters.

Unlike many other industries, though, the game is all about differentiation within a narrow scope. Bias is still a concern. As the Atlantic explains:

Marijuana businesses are now focused on making their brands seem distinct from one another, but still inviting to the general public. LivWell Enlightened Health, one of Colorado’s largest dispensary chains, publishes ads featuring some of the diligent-looking farmers and scientists it employs, to communicate professionalism and trustworthiness. Cannabrand, meanwhile, has rebranded one client, a dispensary originally called Verde Wellness Center, as Verde Natural, to suggest a rustic, sustainable, back-to-the-earth vibe. The ads that Cannabrand designs typically use lifestyle-oriented images: young people hiking, frolicking with friends, sitting around campfires. “You connect with a brand that you can relate to,” DeFalco told me. “If people are doing activities that you’re likely to do, you’re more likely to connect with that brand.”

This sort of marketing strategy makes a lot of sense.

After all, the rebranding of recreational drugs like cigarettes and alcohol as lifestyle brands was incredibly effective in decades past.

That said, such rebranding efforts didn’t exactly take place in the Prohibition era. That is essentially the climate marijuana dispensaries face today, which raises what you can and cannot do with your marketing. As Erik Devaney writes:

Due to the legal complications surrounding marijuana — i.e., it’s illegal at the federal level, but at the state level it can be decriminalized, legal for medicinal use, and/or legal for recreational use — questions about what’s legal and what’s not in the world of marijuana marketing pop up all the time.

As Melanie Rose Rodgers, a Managing Partner at the Denver, Colorado-based marijuana marketing agency Cannabrand told me, “One major challenge our clients face is all the red tape that exists due to marijuana’s federally illegal Schedule I status.”

Further complicating matters is that guidance on the subject is necessarily location-specific. For instance, outdoor advertising for marijuana dispensaries is illegal in Colorado. Meanwhile, in Washington, this billboard is visible for all to see. 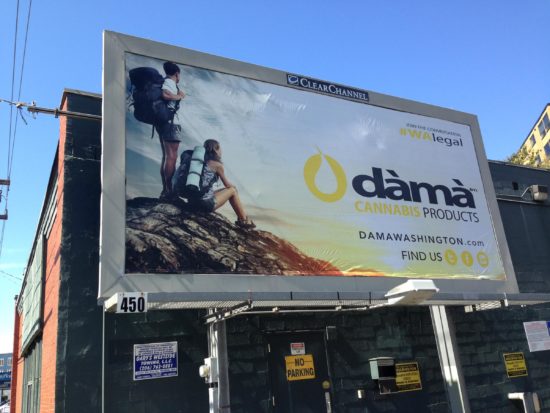 Once you have a solid understanding of the rules in your state, though, most marketing experts in the space seem to agree: the biggest opportunity for growing cannabis dispensaries is in visual design.

For instance, dispensaries opened before 2012 were once described as having the appearance of “underground abortion clinics.”

Today businesses are investing significant amounts of capital in creating a more sophisticated aesthetic in their stores.

As niche turns to mainstream, everything gets a little bit slicker, and the consumer is as well. […] The consumer is growing up as well. They’re becoming more discerning. And with the added competition, you’ve got to step up your game. … I think it’ll be interesting to watch not just from a dispensary design perspective but even from a packaging standpoint as well — product packaging — what folks will have to do to be able to stand out in the market.

That market might be about to get a little more crowded, too, boosting the demand for such services. At least eight different states will be voting on the legalization of recreational or medical marijuana use this November, including California’s behemoth.

Should a significant number of those states pass the legalization initiatives, we could finally see some movement on the federal level, which would open all sorts of doors for cannabis entrepreneurs across the country. It’s far from a sure thing, but as Motley Fool reminds us:

The real buzz among marijuana supporters is what might happen come November. President Obama has suggested that the best way to get the attention of Congress is to legalize marijuana in as many states as possible at the state level. If a majority of states approve marijuana measures and public opinion continues to swell in favor of cannabis, Congress may have no choice but to consider decriminalization — or legalize the substance.

Even if there is no federal action on the matter, any increase in the size of the market will increase the need for design and branding assistance.

If you find yourself in need of such assistance, we’re pretty sure the creatives at crowdspring would be happy to help.