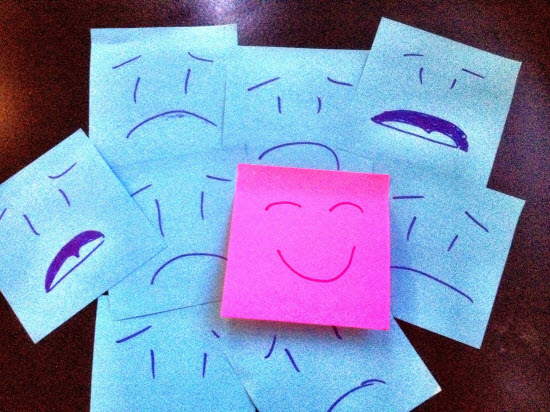 We’re fortunate to have built a great team at crowdSPRING.

What makes one employee highly effective and another average? For some of our job postings, crowdSPRING receives hundreds of resumes. How do we find the the most effective people to join our team?

Contrary to the way most companies hire – we never hire the best candidate from a pool of candidates. We hire only when a candidate is the right fit for us. We’ve had  hiring cycles where after reviewing hundreds of applications for a position, we elected not to hire anyone. We’ve also hired multiple people when looking for only a single hire. Ultimately, for us, it comes down to finding great people who we believe would be effective and who will make our team stronger.

When interviewing, I look for the following seven habits – every highly effective employee with whom I’ve worked (at crowdSPRING and elsewhere possessed most of these habits):

It’s not a secret that talented people are effective when they’re in good mood or excited about a project. But it’s rare that we can be in a good mood 100% of the time and the initial excitement about a project often dissipates as the project drags along. Business is like a roller-coaster ride. There are many ups and downs – often in the same day. It’s important that employees stay disciplined during the ups and the downs.

For example, our customer service team manages a community of 200,000 people. We deal with hundreds of thousands of customer service tickets, emails, and social posts. Many are mundane requests that we see often, but our ability to wow customers and make them happy depends on our attitude and respect for each customer. There’s a reason that 96% of crowdSPRING’s customers recommend us to their friends and business associates – we work very hard to earn that trust and recommendation.

Interview tip: When interviewing, I often ask about the candidate’s most favorite project and also about their least favorite project. I compare the passion with which they describe each, the effort they brought to each project, and the results they achieved. Highly effective employees will, naturally, be more passionate about projects they loved, but they’ll demonstrate a good deal of self-discipline talking about projects they did not like – and what they did to achieve great results despite a lack of strong interest.

We all make mistakes. The most effective employees seek constructive criticism rather than avoid it (especially when they’ve made a mistake). Winston Churchill famously said:

Criticism may not be agreeable, but it is necessary. It fulfills the same function as pain in the human body. It calls attention to an unhealthy state of things.

Think about your own employees. When you provide constructive criticism, do your employees listen and act on that criticism? Or do they instead choose to argue with you?

A year ago when I was going to be away for a week, I let our team know (as I always do when I will be away from the office). Because we have a small team, I work closely with our engineers to make sure crowdspring.com is up and operating at 100%. I typically keep a close eye on operations, but that upcoming trip would make it difficult for me to do so. One of our engineers (who joined our team a few months before my trip) promptly responded to let the team know he would be the go-to person for any site problems. He provided his mobile phone number and promised to be available 24 hours per day if anyone needed help.

More recently, when we hired a young engineer who was to work remotely, one of our experienced engineers realized that in the past, we have not done a very good job closely mentoring remote candidates. We do this well in our office, but that didn’t translate to the same attention when working with remote engineers. This became particularly painful in the past when working with younger engineers.

The experienced engineer suggested that he mentor the new hire – they would have quickly daily calls, would do some pair programming, and work closely together during the initial 30 day trial period – and beyond (we hire all employees on 30 day contracts – it’s a good way for us to look at them and for them to look at us).

Both of those examples showed true leadership and set a great example for the rest of the team.

Interview tip: Ask candidates about their prior jobs and focus especially on areas where the candidate found gaps in a product or service (or a process) and how they dealt with that problem. Look for initiative, creativity, and a pattern in the way the person used opportunities to show their skill and leadership.

True innovation requires hard work and focus, not just great ideas. We tend to be excited about end goal, but not prepared for the hard work and persistence. Even with careful planning, some projects can take much longer to complete than expected.

The project to redesign and rebuild our email notification system has taken much longer than anyone anticipated. It’s a very complex project, requires a great deal of careful planning and testing, and is a critical part of our service. Among other things, we wanted to add useful analytics and tools to help us manage the email, manage problems better, and make sure that we can continue to deliver notifications to users in a timely manner.

Most engineers would have become easily frustrated with the project and the increasing complexity, but the person leading that project is persistent and understands that frustration will only set the project back. His effort and motivation on that project today is just as great as it was during the first week when he first started that project.

Genius is one percent inspiration and ninety-nine percent perspiration.

Interview tip:  Ask candidates about longer projects on which they worked. Talk about the details, how they maintained their motivation, focus and excitement. How did they deal with teammates who were not as motivated or focused?

We don’t hire people at any position if we don’t believe they can be decisive. We want people to take risks and not worry about making mistakes. Most employees, especially at bigger companies, hold themselves back because they fear failure.

You’ll rarely have complete information when running a business or making decisions, but indecision is paralyzing, especially to startups and small businesses.

One of our engineers strongly advocated building a system that would allow us to monitor activity on our site, would enable customer service to research potential fraud, and would help us build and test fraud tools. It was to be a major project with a high risk because we weren’t certain it would help us – and to what degree. That engineer saw an opportunity for us to improve, an area we were not fully exploring, and jumped head first to solve the problem.

Today, the system he build – crowdBEAT – is one of the most critical systems we run at crowdSPRING. He’s improved it numerous times since and it is a cornerstone of our suite of fraud tools that helped us to weed out fraud from our marketplace.

Interview tip: Ask candidates about projects in their prior jobs where they took big risks. How did that project originate? Was it self-driven or assigned?

When hiring engineers, for example, we look for strong participation by the candidate in building open source software. Today, we don’t hire engineers who have not worked on at least several open source projects. We found that such projects provide many opportunities to evaluate a candidate – they’re public projects and require engineers to be risk-takers (nobody else might be interested in their project) and also to be decisive (when leading a project, deciding what third-party suggestions to include and what not to include in releases).

Most people talk too much. The most effective employees (and leaders) are people who listen first and talk when they have something meaningful to add to the conversation. Such employees are effective because they don’t need to hear themselves talk. They consider the facts, ask questions, and then share an opinion. Silence is golden.

Interview tip: One good way to measure a person’s listening skills is to give them opportunities to ask questions.

But that invites them to talk – not to listen, you say. True. Yet, by asking questions, you’re exploring whether they take cues from your answers to ask follow-up questions. If they simply walk in and ask three pre-written questions, it’s doubtful they care much about what you have to say – they’re simply asking questions because most job candidates are expected to ask questions during an interview.

The most effective employees are experts in their key areas, but recognize when a project is over their head, and bring in others to help. They then generously share credit with others to make sure that in the future, others would continue to lend a helping hand. This conveys great judgment and leadership. You don’t want employees that take on projects they can’t complete, waste months on those projects, and then leave or come to tell you that they are in over their head. You also don’t want people to take 100% of the credit and dish out 100% of the blame.

Interview tips: Ask about especially difficult projects that required collaboration with others. Was the collaboration required or did the candidate bring in other people after the project started to fill in expertise gaps? How did the teams work together? How was credit (and blame) shared.