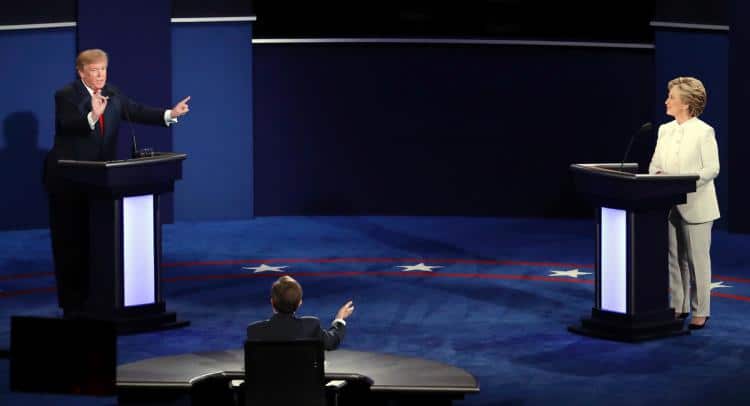 We’ve never experienced a U.S. presidential race like the one we’re living through today. To say that this election is unprecedented is an understatement. But while, in this polarized climate, the debates may seem more like a sadistic sideshow than anything resembling productive rhetoric, the debates do offer important lessons for business owners.

Yes, you read that right.

Those of us in the business world may not be arguing about Wikileaks and assault allegations, but we are familiar with the tension that has underscored these high-stakes political squabbles. If we’re honest with ourselves, we know that a lot of meetings actually end up becoming debates, because they’re usually used to make decisions from a pool of opposing opinions anyway. And even if they aren’t necessarily relevant to the way you or your company structures meetings, the presidential debates can certainly teach us a lot about the way that we interact with each other in group settings.

With the final presidential debate of the 2016 election cycle in the books, we’re left to reflect upon the aftermath of three contentious, momentous evenings. They resulted in large amounts of memes and Twitter jokes… but not a whole lot of resolution or confidence in the candidates. So what can we learn from these debates that can translate into our work lives?

While it may be tempting to offer up your opinion or counter an argument when you disagree, it’s usually better to wait until the other person is finished speaking. Then, you can retort with your own ideas and use up your speaking time with persuasion rather than a mini debate over who should be talking.

Looking at a poll and analysis done by Politico, Clinton won both times of the first two debates according to voters, and initial polling from last night seems to indicate she won again. However, the frustration levels of those watching were higher with both candidates due to the interruptions. And the moderators had to interrupt several times in the second debate both for time and for content management, making the candidates seem less mature. The issue was that every time the candidates would interrupt each other, they weren’t actively listening to each other, which was reflected each time Anderson Cooper or Martha Raddatz had to tell them to take a step back and calm down in Missouri, or how often you could hear Charles Wallace stammering in the background yesterday evening. The interruptions would come off as less mature than the comments themselves– even if they were ridiculously off topic.

LESSON: Though it can be tempting to force your voice above those with whom you disagree and stop them from finishing their thought, that won’t be perceived as powerful. It will be seen as childish. Be better than that.

Be aware of your body language.

Last night was a traditional presidential debate, with podiums and pomp and circumstance. And while many thousands of words could be written about the nonverbals seen on stage in Las Vegas (some have already started), it was the second debate that will be remembered as a cautionary tale regarding body language during public presentations.

The second presidential debate was a town hall debate, which allowed Clinton and Trump to move around the stage and direct their answers to specific people. Town hall debates are meant to be more fluid and natural than speaking at podiums, allowing the candidates to better connect with the audience and undecided voters. But at the second presidential debate, there was a clear difference between the types of body language that Trump and Clinton employed.

Each time Clinton walked towards whomever she was speaking to, Trump would slowly walk up behind her, standing at an unusually close proximity for a town hall debate. In an article for the New York Times, public speaking body language expert Ruth Sherman gave her analysis:

The proximity to Clinton with which he stood behind her at certain points was particularly threatening…This was a conscious assertion of power…He was very distracting while she was speaking — walking around, fidgeting, swaying, leaning on his chair.

The threatening nature of Trump’s body language encouraged viewers to make a deeper connection to his predatory behavior of the then recently released Billy Bush video, which definitely didn’t help his poll numbers. By trying to exert power, Trump did the exact opposite. Instead of trying to tower over Clinton, Trump could have assumed a power pose to signal successful tendencies, or employed one of her techniques.

Much like body language experts suggest, Clinton listened attentively and kept her body “open” and facing the people she was addressing. This made her seem likeable. We can mimick her body language in meetings in order to convey a similar connection, which fosters likeability and interest. Stillness, leaning forward, slow nodding, and patience are all aspects of Clinton’s movements that we can employ– and everything that Trump didn’t do (which hurt him).

LESSON: Be aware of your nonverbals in presentations and group settings. Some experts believe that up to 93% of all communication is nonverbal, so if you’re not deliberate about your body language and movements, you could undermine everything you’re trying to accomplish.
Be nice(r).

Of course the debates are competitive, as is the workplace– but cruelty rarely succeeds over kindness in persuasion. Time and time again, we saw both Clinton and Trump engage in psychological warfare. Psychological warfare is the use of tactics to destroy a person’s morale and willingness to fight. Dr. Isaiah Hankel, author of Black Hole Focus: How Intelligent People Can Create a Powerful Purpose for Their Lives, explains:

Very often, these people use the power of suggestion and other psychological strategies to throw you off balance. Once you’re off balance, they will seize the opportunity to outmaneuver you.

During the presidential debates, we saw a majority of the psychological being instigated by Trump when he would attack Clinton personally, such as threatening to put her into jail for a resolved case. While Clinton would often take the high road, she would sometimes play into his negative tactics, too, pointing out everything he has done poorly when the question focused on her plans specifically. This may have worked to a marginal point, but scientific research proves that psychological warfare is typically ineffective to influence behavior, meaning those attacks were basically just wasting time. A 2012 study discussed psychological warfare in terms of intense suggestion:

The intense suggestion that Clinton and Trump employed caused them to respond more reactively each time, which was part of the response expectancy that they had created. That’s why it was so great when undecided voter Ken Bone asked the candidates to say something nice about each other. He broke the vicious cycle and served as a reminder that looking for the good in a situation can help kick start or restart creativity, productivity, or simply just shake things up. And we’ve all been in a meeting when we need a Ken Bone, someone to recharge the group and turn everything upside down in order to get out of a rut.

LESSON: Though it might be tempting to strike back when someone turns petty in the next meeting, hold your tongue, count to ten, and respond with a cool head. It’s more likely to get you where you need to go.

The last presidential debate is finally in the books, and many of us, exhausted by the 2016 election cycle, are happy to be done with the circus. But if you’re feeling brave, maybe go back and take another look at them — not for their platforms, but to really study their communication missteps and wins. By watching two people compete for one of the most visible communicator positions in the world, by learning from their mistakes, we can learn how to better handle ourselves in group settings at work without falling into the same traps. And we can learn how to be the person to turn everything around and look through a different perspective… something these debates could use a lot more of.