It’s a well-established fact that video can drive major engagement for a brand. As Gary Vaynerchuk pointed out last year:

No matter what you’re selling, no matter what your company does, if you don’t have a video marketing strategy for the biggest video platforms, you are going to lose. And in case you haven’t noticed, the platforms of distribution for video content online have shifted drastically over the last 18 months. Facebook is getting more daily minutes watched than YouTube, Snapchat’s daily views are now in the billions, and video on Twitter has taken listening and one to one branding to a whole new level.

What could be better than that? Live video.

Apps like Meerkat and Periscope shook up the market in this respect, but other social titans weren’t far behind. Facebook, in particular, realized pretty quickly they were going to have to evolve in that direction to keep their user base engaged. Initially, they introduced the feature to their platform last year for verified accounts, but eventually, they expanded access to the general user base. 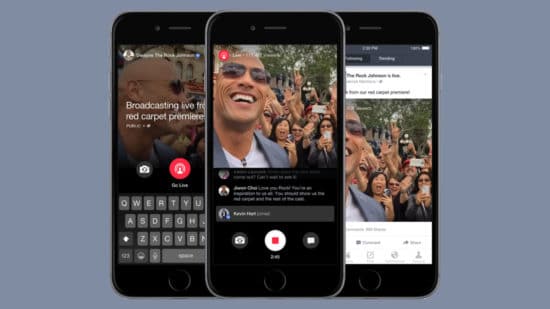 Though demand for the service had been demonstrated by smaller players, Facebook live video feeds didn’t catch on right away. Celebrities like George Takei have been more likely to use it than others, allowing the feature to function like a video-based version of a Reddit AMA, but most users were either unaware of its availability or unsure how to use it.

That’s begun to shift over the past couple of weeks. Following the live feed from Philando Castile’s girlfriend that was broadcast right after her boyfriend had been shot by an officer, a slew of people took to the live platform to express their frustrations. Suddenly, Facebook’s live video had found an audience, with one of many applications in the spotlight.

Facebook announced that it has begun rolling an update to its live video platform that would allow longer live broadcasts.

People and Page administrators will now be able to broadcast Facebook Live up to four hours per session, according to VentureBeat.

When Facebook Live first launched, it only allowed users to broadcast live videos for up to two hours. The social media site said that people have requested to make livestreams longer and so the company has done just that by doubling the limitation.

Facebook has also added fullscreen and video-only modes through the update. Previously, Facebook Live videos were presented with a square aspect ratio to give room for comments.

Now, livestreams are broadcasted and viewed in fullscreen on mobile devices. Fullscreen mode will work in portrait and landscape mode for iOS devices.

On the other hand, Android devices will only support portrait mode. Facebook says that landscape mode will be available more widely “later this summer.”

This change makes the live video functioning even more appealing to both users and broadcasters. But it should also be an exciting opportunity for businesses engaging in social media marketing. Why?

Live video provides brands with greater flexibility in terms of video generation. Static videos are expected to have a certain level of production quality to them, and though those videos should still have a role in your marketing strategy, live video can serve as a solid, low-resource, high-return supplement to your current social strategy. Plus, with the ability to save those live broadcasts, you gain all kinds of new video assets hosted on your Facebook page.

It’s also far more interactive than videos that are produced. With live video, you have the opportunity to engage with viewers and commenters in real-time, creating a more authentic and dynamic experience for the viewers. It also yields a lot more data than traditional video production might because the idea of “getting in on the action” can drive more viewers to participate in the conversation.

It’s also distinctively important in terms of Facebook. Live video feeds are certainly available on other platforms, of course, but Facebook should be King in this space. Sure, you can set up a live feed on YouTube, but the space is a sprawling behemoth, which can make getting people to your live broadcast difficult. Periscope, though increasingly popular, boasts only 2 million active daily users. For context: during Q1 of this year, Facebook had 1.09 BILLION daily active users. Your live broadcast just has way more visibility through Facebook.

So yes, businesses should take advantage of live video broadcasts on Facebook. How can they effectively leverage the tool? Let us count the ways:

1. Boutique clothing stores can host a live video displaying the latest fashions that have arrived in their store, driving awareness of available products much faster.

2. Businesses offering cooking lessons can use live video to show the prep for that day’s lesson, encouraging possible customers to stop in to learn “X.”

3. Businesses without a brick-and-mortar location can take a page from the celebrity brand promotion book and promote a live AMA for those following the brand, giving them a chance to offer answers to questions about a potentially complex service.

4. Startups offering a new product can provide a demonstration of testing said product to highlight its value in a dynamic way.

5. Companies can host live video feeds on the street where they ask passersby to try their product relative to the competition.

6. Brands can host a goofy live video feed where they stage some guerilla marketing efforts, like a flash mob doing a choreographed dance.

7. Businesses looking to highlight a quirky personality can offer a live video feed of pranks in their offices. (We’ll have to do one ourselves the next time we have a Nerf gun war!)

8. Content creators can use a live feed to interview people on the street about a topic that’s relevant to their audience.

9. Businesses can participate in social trends to join the conversation in more dynamic ways. For instance, you could have, in the past, made your whole office take the “Ice Bucket Challenge” live.

10. Companies can start a social war with a competitor to drive attention to their brand and service offering, featuring something like a dance-off or rap battle. This could be especially productive for small businesses facing off with larger, less nimble competitors.

11. Restaurants and bars can latch onto the Pokemon Go trend by showing players at their location catching rare Pokemon due to a lure the business has placed nearby.

12. Companies offering fitness classes can give fans a sneak peek at what they’re missing by doing a live video broadcast of one of the classes in progress.

13. Hosting a special promotional event? Companies can offer live feeds while an event is in progress in order to drive more attendance.

14. Medical professionals can host live feeds offering advice on a specific subject that their services address, like a physician doing an AMA about how to best take care of yourself during flu season.

15. Series of live videos can be used to tease a larger release of a product or service, hinting at a big reveal that is otherwise being kept secret in order to keep the audience on the edge of their seats.

16. A series of live feeds can be used to highlight the talent in your office, offering an opportunity for each team member to answer questions specific to their role in order to provide a human face to the company.

17. Entertainment locations like bowling alleys, performance halls, clubs, and more can give people a glimpse of what’s happening that night in order to drive more traffic and revenue.

18. Non-profits can use live feeds that feature celebrity spokespeople talking about the issues to garner more attention for their cause.

20. Companies can offer support for specific and socially relevant causes in statements of solidarity — much like groups like Salesforce did in response to Indiana’s RFRA passage last year — but do so in a way that’s more likely to be viewed and shared than a written statement.

21. Distinctive alter egos can be created for entertainment value via serial appearances, driving more attention to the brand. A great example is what content creator Mary Sparr of Young Mary’s Record has done in the past with “Missy” on Snapchat.

22. Subject experts can host live talks on Facebook on subjects already generating traffic to their website in order to amplify trending interest.

And this is really only a taste of what you and your business might be able to do with Facebook’s live feed. We’re just starting to understand its use as a marketing tool. How do YOU plan on leveraging live video for your company? Tell us in the comments!