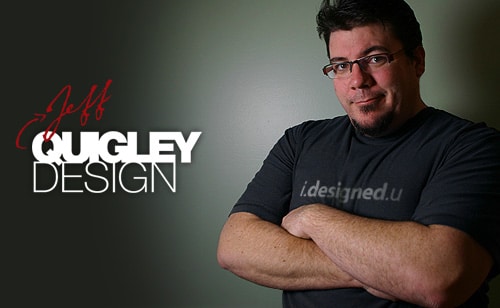 1. Please tell us about yourself.
My name is Jeff Quigley and I live in a small coastal community called Musquodoboit Harbour (pronounced musk-o-dob-it) in Nova Scotia Canada. It’s just outside of Halifax, and I moved myself and my family here about two years ago after deciding to get out of Toronto. I’ve got a beautiful wife and two boys, and I work from a home office which is just a few minutes away from a fantastic sandy beach. 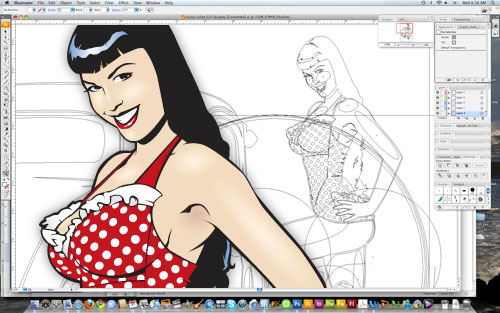 2. How did you become interested in design?
I honestly can’t recall a specific incident that turned me onto “design”. I’ve been drawing since I was a kid in school and I was the go-to-guy for drawings and illustrations. When I was younger and my mom moved us from the East Coast to Ottawa Canada, it was my artistic abilities that helped me avoid the “new kid in class” stigma, and I quickly made new friends – some of which I still have today.

Later on in high school I volunteered with the year book, and in my senior year I got the chance to experience working on-the-job with co-op education. It was a new concept way back in the 80’s, but I was lucky enough to spend time illustrating for the National Museum of Natural Sciences, as well as 2 episodes working on the CBC television series “The Raccoons”. Now, twenty-plus years later, I’m still in the game. Yes, the rules have changed significantly, but I’m still here enjoying it.

3. Which of your designs are your favorites and why?
Wow, that’s like asking me to choose which is my favourite child! It’s an impossible question for me to answer since some of my best work never sees the light of day! I guess designs that I do for myself or for my family are always rewarding to me because there’s never need to explain the creative process or give a rationale behind the design. For example, just recently I did a logo design for my youngest boys’ hockey team. When he presented it to the rest of the team, their reaction was payment enough. Within a week each team member had it on their t-shirt. I’ve had hundreds of things 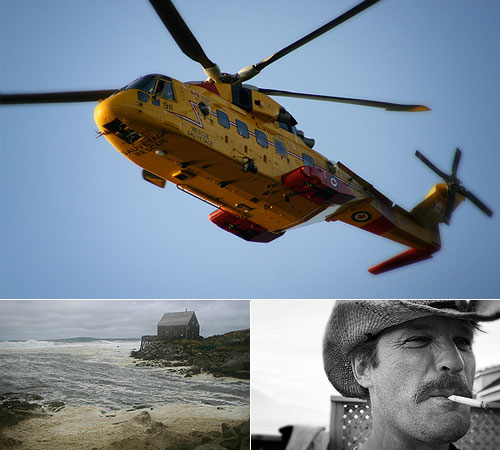 printed and published, but that team logo was special.

4. Who/what are some of the biggest influences on your design work?
When I was at the Raccoons I met Valda, a supervisor who later passed away very unexpectedly. She pointed me in the right direction when I was young and for that I will never forget her. I also worked with Robert Burns in Toronto. He was a creative director who took me under his wing on a freelance collaboration. He passed away a few years ago as well, but his influence lives on.
But on a lighter note, I’d have to say it’s other designers that influence me the most. Competition fuels my creativity and I thrive on it. That’s why CrowdSPRING is such an interesting concept. Put me in a boardroom to pitch my creative to a potential client and I’ll walk out with a win. CS flips that 180 degrees and drops it on its head. Now, my concepts are laid out in a gallery where my 20-plus years of boardroom savvy amounts to nothing. With CrowdSPRING, I need to up the ante by creating smarter and communicating better when making a submission. The majority of the time my experience is able to come through to the buyer when I introduce myself and explain my entry. It’s just a different process now, but communication is still a paramount factor in gaining cS wins. 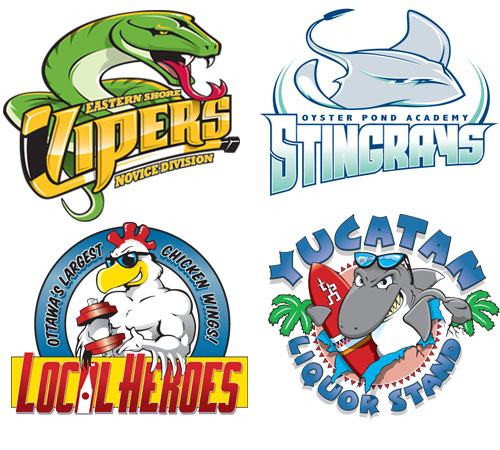 5. How do you come up with ideas for concepts after you read a buyer’s creative brief?
There are a few factors, really. Coming up with concepts depends a lot on the project. Is there an interesting business name? A good creative brief? Who’s the target audience, and how open is the buyer to suggestions? How a buyer describes their project is equally important. If they are detailed in their brief and relay valid information, chances are good I’ll enter. Not so much if the brief is lacking. I also look at the existing gallery to see if another designer has nailed the concept. If I think that someone has, and I feel I’ve got nothing better to offer than another entry on the pile, then I won’t enter the contest. I’ll even “heart” other designers entries to show my support.

6. Mac or PC?
I use a Mac, although I cut my teeth on a PC. As an illustrator in the 80’s, a PC was plopped onto a desk next to my drafting table and my boss said “figure this out”, and I did. It was loaded with Corel Draw 1, I think. After that my choice was solely based on affordability and PCs were my only option for the next 7-8 years. I finally was able to buy my first Mac in 1996 and I never turned back. I find the Mac OS is just far superior and the programs run smoother. For software I use the usual creative suite of Adobe products, and I also love working with video in Final Cut Pro. My baby is a 17 inch MacBook Pro, which an awesome piece of equipment. I’ve got 2 additional iMacs Gs in the house as well and my kids are already pretty computer literate with my oldest (11 years) now experimenting with stop-action animation.

7. What is your dream design project?
My dream is a complete branding project that would see the development of a logo or product identity that would span into various mediums for web, print, television and even radio. I’ve come pretty close to that on a few big projects that

I’ve worked on in the past (UMM, Motorola and Astra Zeneca), but the illusive total package for me hasn’t come around yet. It’s not something that I’ll be disappointed with if it never happens as I’m just as happy creating something for an upstart as I am working with larger corporations.

8. Rumor has it you have experience in Art Direction and Design for print, web,  illustration, and even a little photography. What’s your favorite?
Without a doubt I’d say Art Direction. I did AD for UMM Magazine and now I’m currently a Senior Art Director with a US based agency. But, title and seniority does not mean job security. Just over a year ago, when the US and Canadian economies tanked, I had to take a significant salary cut as well as a reduced work schedule to save my job. That left a huge hole in my income and I needed to find freelance work to supplement the loss. It was then that I discovered CrowdSPRING and signed on. Being an Art Director is just the hat I wear, under it is the true designer at heart. I need to be able to call on all my skills to fulfill by current role, so illustration and photography become useful whenever I need them – like next week when I need to do a photo shoot for a client. It’s all about the value added service. 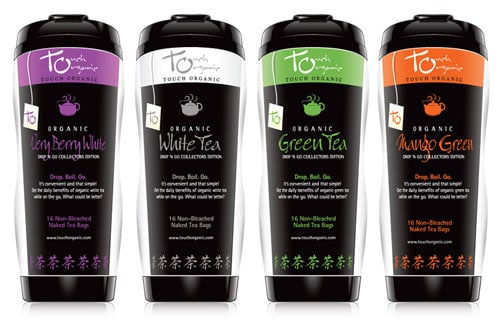 9. Please describe your typical work day.
Because of the cutbacks I’ve experienced over the past year I’ve had to change my day-to-day routine. Now, I’m usually up at 5 a.m. and logging onto CrowdSPRING looking to see what’s out there. I’l 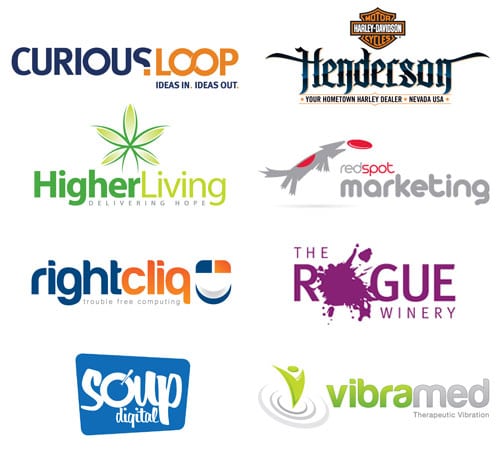 l try and enter as many as I can before 9 a.m. when, on Tuesday through Thursday’s, I’m dedicated to my “real job”. On Mondays however, which is my day off, I’m usually 100% doing cS things…and of course weekends as well. So it’s a juggling act that requires some discipline on my end, and if I’m busy you can often find me working well into the evenings to keep everything in-check. Once in a while though, like I’m sure many others can relate to, I need to just walk away from it all and recharge, usually with my wife and kids.

10. If you weren’t designing, what would you be doing?
That’s a good question! In high school I had a job at a butcher shop as well as installing carpet, however, I love doing work around my house and I’m told I have a knack for it. So, maybe I’d be in the trades as builder or something that is hands on. Either that or a chicken wrangler.

11. What do you do with your free time?
I don’t have much of it, but when I do I try and spend as much time with my wife and kids getting out doing family things. We bought a 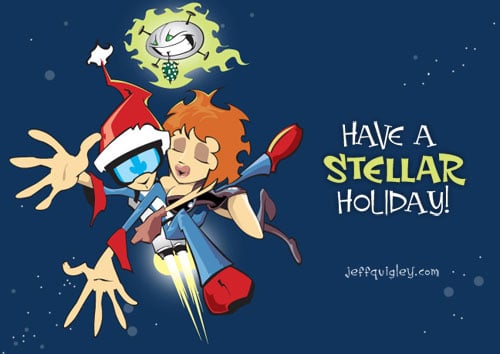 n older beach house so my wife and I are always neck deep in some kind of home renovation work. Oh, and I also play drums in a rock/metal band, but we don’t jam often enough which is totally my fault due to my schedule (sorry lads).

12. What are the most challenging and rewarding aspects of being a graphic designer?
I think the most challenging thing about being a designer today are the changes within industry and profession itself. With hardware and software becoming more accessible and affordable, it’s introduced the profession to many who are ready to declare themselves graphic designers. I’ve always said (and some may say “preached”) that just because you have the biggest and best shiny pencil doesn’t mean that you automatically know how to draw. That holds true for designers. There are a lot of people out there that want to be designers, but the downside is there just isn’t enough on-site employment opportunities with agencies. That’s where crowd sourcing comes into play and it’s a hugely heated debate these days. The purists (which once included myself) passionately arguing against the idea as bad for the industry because it requires “spec” work from

creatives. Over the years spec work has been labeled taboo and is really the rally cry behind the entire anti-crowd sourcing movement. Professional designations in graphic design can be revoked due to breaking the spec work rule, and in 2006 I ended my affiliation with one such association. Our industry is rapidly changing, and regardless of anyone’s personal view, will continue to do so at an alarming rate. In the end it’s the client, or in cS’s case, the buyers who dictate how we continue to do our business. It’s confusing right now, as it was in the music industry when it faced the monumental task of reinventing itself, and we just need to ride out the storm. Eventually all the bad things will work themselves out. There will still be advertising agencies and there will still be crowd sourcing, but I think in time you’ll just see better quality creative results and a way that both can work together. After all, In the end great creative is king.
As for the rewards, just doing what I love to do and being able to make a career out of it is my reward. Speaking of which, I need to get back to work.